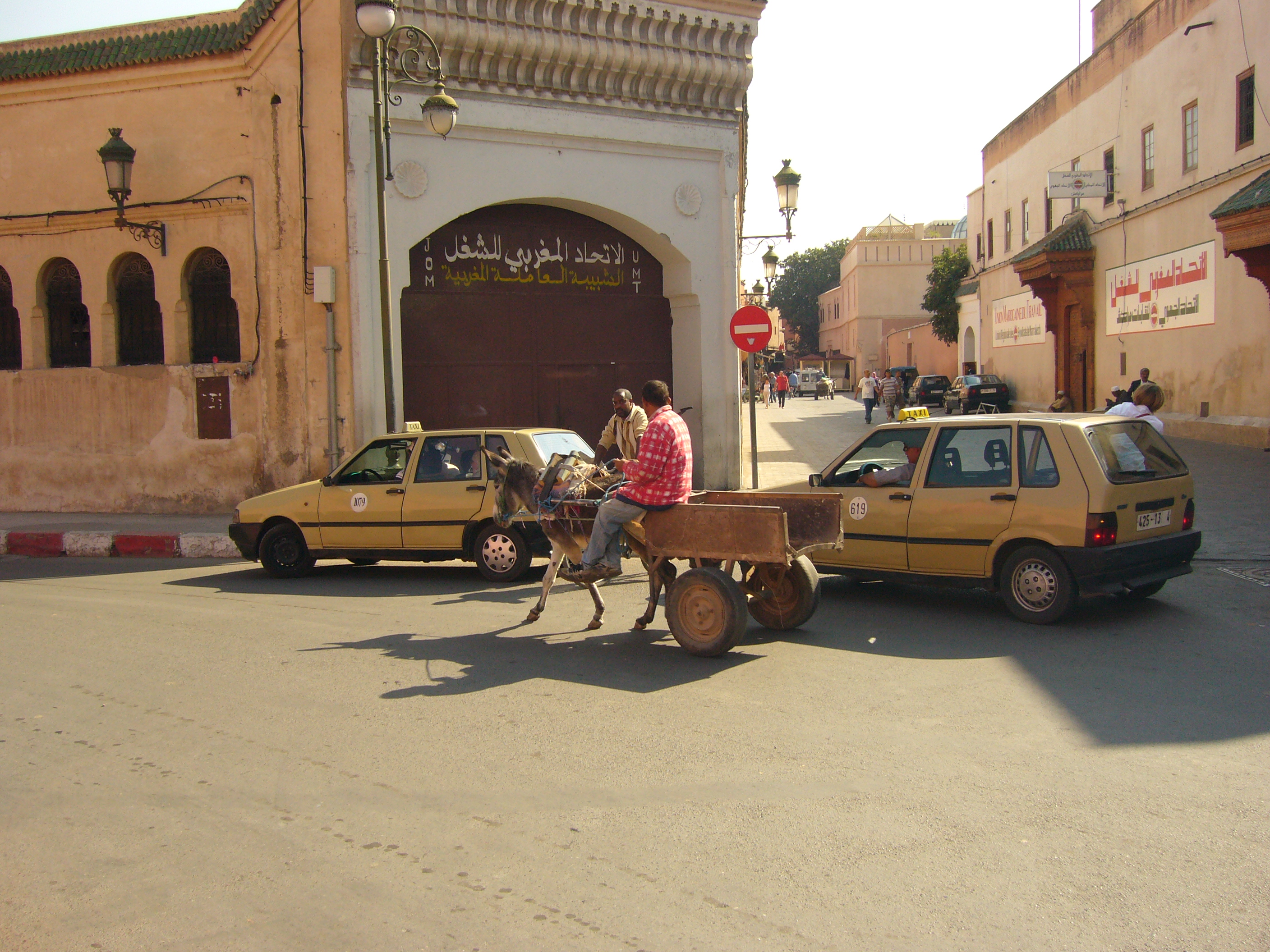 all posts by date  travel

I went for 3 days in October from London (with Easyjet). It was one of the best getaways I had in terms of money vs experience vs quality. I stayed in Riad 72 (sister of Riad 2, also nice): modern, central, great value/money at around 120EUR/night (http://www.riad72.com/ http://www.riaddue.com/). With only 4 rooms, situated in central Medina (next to Bab Dukkala mosque), and owned by an Italian woman, offers a great combo of modern/minimalistc yet traditional feel, absolute Zen.

Highlight of the trip:

1. Souks, souks, souks. They make the Grand Bazaar in Istanbul seem like a touristic joke

2. Jamaa el Fna square during the day: snake shows, stands with teeth being sold (despite everyone being toothless), biggest mess I have ever seen until I saw the same square at night

3. Jamaa el Fna square at night: the biggest mess I have seen. An unbelievable transformation of the square

into an open air food fair where locals would cook traditional food and people would go and sit all together and eat (you can see anything from snail soups, goats heads, kebab and lots of chicken)

4. I personally liked the tanneries mainly because no one dared to go there (I don’t know why), it smells but not that bad and I liked the fact that there are no tourists- it is not dangerous!

5. The contradictions: Medina vs Gueliz, quiet and peaceful Riads vs Souks, Rich vs Poor

TIPS I was not given:

Dinner:
Booked Le Foundouk but at arrival we were told they lost their alcohol license so they kindly reserved Dar Zellij for us (on our request). Having seen Le Foundouk I think it was too modern and touristic for Morocco (http://www.foundouk.com/, http://www.darzellij.com//)
Dar Zellij: In a riad as usual, semi casual, good food but the standard traditional set menu: the tiny salads/dips to start with- all tasting of rose water, pastille for mid course (some sort of baklava with pigeon or other type of meat) and cous cous with our meat choice for main. Moroccian food is overall tasty but a bit too sweet for me.
Drinks
Le Comptoir: in L’Hivernage like all the other clubs. It is quite westernised, dark and kitsch with a mix of tourists and locals. It is a restaurant/bar/club open until 1-2am, good for drinks after dinner but I am happy I did not give up a traditional riad dinner for this (http://www.comptoirdarna.com/)

Daytime
Souks. No words to describe what is happening in the souks. They sell everything from shoes, silk, pashminas, kitchenware, household goods to spices, olives, eggs, raw meat and of course…the jewellery. I usually offered a third of the prices they were selling at and agreed around half. If you try walking away they will run after you
Lunch:

Cafe des Epices. It is a cute and tiny cafe in the middle of a square full of antiques. They have sandwiches and salads but its great for a break. I personally could not eat Moroccian food for both lunch and dinner so was more than happy to have a sandwich at lunch (http://www.cafedesepices.net/)
Dinner:
Dar Moha (http://www.darmoha.ma/)
Supposedly the best chef in Morocco.
Ambiance is formal, lots of amazing blue mosaic, the plantation all around makes you feel you are in a garden. The funky traditional live music with the guy who sings while moving his bere is quite cool.

The food was really good but did not taste like the best restaurant in Morocco. It was similar to the night before: set menu, everything tastes of rose water and sugar (even the tomatoes), and the choice is limited. Tasty of course, and given that it was only the second night we were happy to eat the traditional (even though sweet) food (it was only around the third day that we were tired of having dessert for main course)
Around £50 each with wine and set menu
Drinks
Early night in after the long day at souks

Daytime
Nikki beach: very relaxing, luxurious and exotic as any other Nikki beach. It is the other side of the souks: where the rich and famous Moroccians and tourists go to party
Lunch
Cafe Arabe: quite touristic, food is mostly European and DOES NOT taste good. It’s is great for coffee and relaxing while walking around in the souks, and the view of the Medina on the terrace is lovely (http://www.cafearabe.com/)
Dinner
Le Tobsil

Romantic, quiet but really calm and peaceful. In a riad type place again, slightly more formal than Dar Zellij. The food was definitely the best we had until then (that was before Al Fassia). The main course was slightly different than the standard tangine with cous cous in addition to a very tasty chicken leg that had (finally) not signs of sweetness or sugar. NOT sweet. The dessert was also fantastic.

YSL gardens and L’Hivernage. YSL Gardens are nice and there could be worth it if you have an extra day but DO NOT give up any souk time for this. L’Hivernage has nothing to do during the day
Lunch:
El Fassia (not to be confused with Al Fassia resort)
This is by far the best restaurant we went to in Marrakech. It is outside the old town and ran solely by women. It is also the only place we ordered a la carte and the only place with so much variety.
Ambiance is traditional but kind of westernised. No restaurant we went to was really that formal, (especially on Sunday lunch)

The food is fantastic! We could finally ordered something different than the standard rose water food. Main course was not sweet cous cous with sweet meat tangine but something like mini sausages in the tangine and cooked lamp. The dessert was also interesting: cous cous with milk and cinnamon (I could be bias due to my cinnamon weakness)

We departed for London at around 19:00 which was perfect as we had more than half of Sunday to enjoy the sun. We did not leave before spending 30 minutes taking pictures of the funky airport (obviously my architect friend and not me)- which is also the airport featuring in Sex and the City pretending to be Abu Dhabi airport.

For dinner: Dar Yacout, Dar Marjana
Drinks: Kozy Bar, Bo Zin, Pacha, Montecristo
If you have more days take day trip (Atlas mountains)
If you have less days skip Nikki beach (leaving in London we were in need of some sun and relaxing)
We also wanted to visit more Riads, La mamounnia and other resorts but didn’t have time

all posts by date  recipes
1111
0
Although I love making new recipes and I am obsessed with cook books, I always find myself often going back to those recipes who are easy to make and delicious like pasta Bolognese, home-made...
Read more

all posts by date  recipes
1317
0
I don’t know about you but for me there are some dishes which are staple meals for my family like Cypriot style fish in the oven, veggie or beef fajitas and of course, spaghetti...
Read more

foodie news & other announcements
1725
0
Probably the best thing I have done this month is have aperitivo by the sea at Ventuno Aperitivo, and I mean a PROPER Italian-style aperitivo: pay for drinks and get a buffet of delicious...
Read more

foodie news & other announcements
1069
0
NOA, the beach front seafood restaurant has hosted a lovely evening of Fish vs Meat tasting menu paired with alcohol (cocktails, beer and wine) which was indeed delicious with dishes from raw tuna carpaccio...
Read more