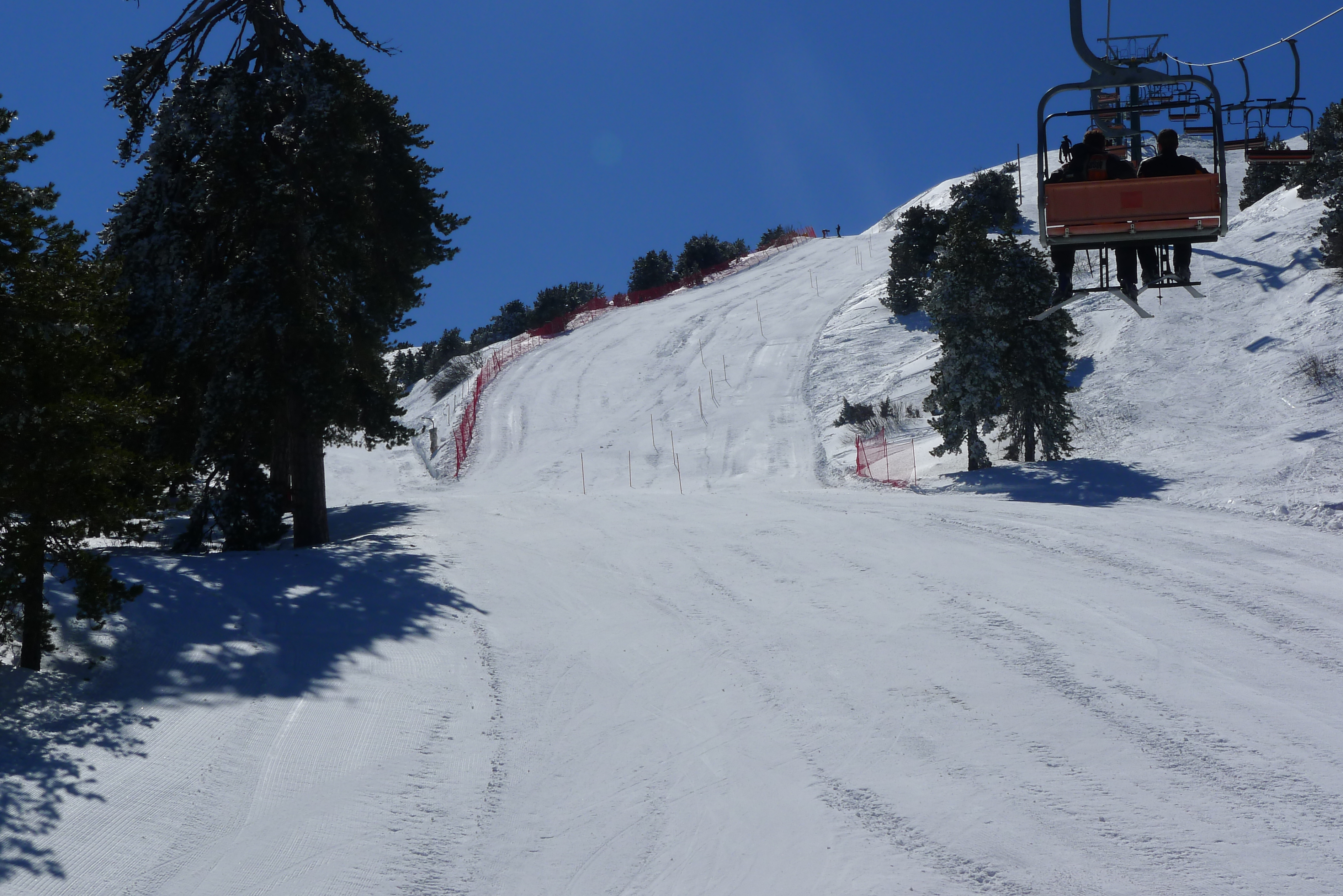 For those of you who thought Troodos is a joke and there is no chance a normal person (or not), can ski there you are absolutely wrong. It might not be the Alps (or even Lebanon), it might be overpriced, it might have the slowest chair lift in Europe, and probably the smallest total piste km, but what is important is that there is a piste (almost 3 in fact), that you can ski on, merely 45min-1.5hrs away depending on where you live.

The pistes are on the highest accessible spot on Troodos mountains. Follow signs for Troodos and then as you drive along after the main square turn left to Olympos towards the ski shelter (where one collects their skis/snowboards/passes).

Once one collects their equipment at the shelter they have three options
1) Sun Valley One (Aphrodite lift) or Sun Valley Two (Hermes lift). Both pistes are great for beginners since they are wide, extremely short and easy to get to as they are around 100m from the Ski shelter. These are also good for families with a sleigh or children learning to ski. The lifts are T-bars for one or two people. There is also a café at the Ski shelter. If you know how to ski DO NOT go here.

2) The other option is to go to Hera. To go there and Zeus (below), the Northface pistes, you have to drive around 5 minutes from the Ski shelter, you can ask them for directions. The first piste on your left is Hera, a green/blue slope. Green for the steepness, blue because it is narrow. It is more proper than the Sun Valley ones as it is longer and the snowboarders seem to love it for its jumps. This is quite good for beginners/intermediate even though it gets tiring skiing down the same piste all day. No café or toilet anywhere. The lift is T-bar.

3) The final option is the Zeus pistes (one family run and a more difficult one). To get there one can either ski from the middle of Hera (there is a small path which takes less than a minute) or drive as it is 500m down from Hera (easier to ski there or park there directly). There you can find the only chair-lift in Cyprus, also the slowest one in Europe imported from Lebanon, don’t worry, it is still better than the T-bar! As you come out of the chair-lift the first piste on your left is the difficult one and the one further on the right is the family run. The difficult one is a red one (even though they say it’s black) and quite wide (you can see it from the bottom) but short. This is where the national team trains. The family run is the longest one and less steep but much narrower. This is probably a blue/red. There is also a café at the bottom.

If you can go on a weekday DO NOT go on the weekend. One can wait up to 1.5 hours for equipment and just a bit shorter to go up the piste, not to mention the traffic.
If you can’t go on a weekday go very early or very late in the weekends.
The car to smoothen out the pistes is horrific and makes the snow more like a freshly plowed field. Go a bit later for better snow (ignore this tip if you go on a weekend).
Total for skis + poles + boots + pass was 39€ and it is now 28€ on weekdays as we are approaching the end of the season.

Tags: all, other
Share:
Taverna I Vavatsinia (aka Takis) -Vavatsinia
Vietnam & Laos