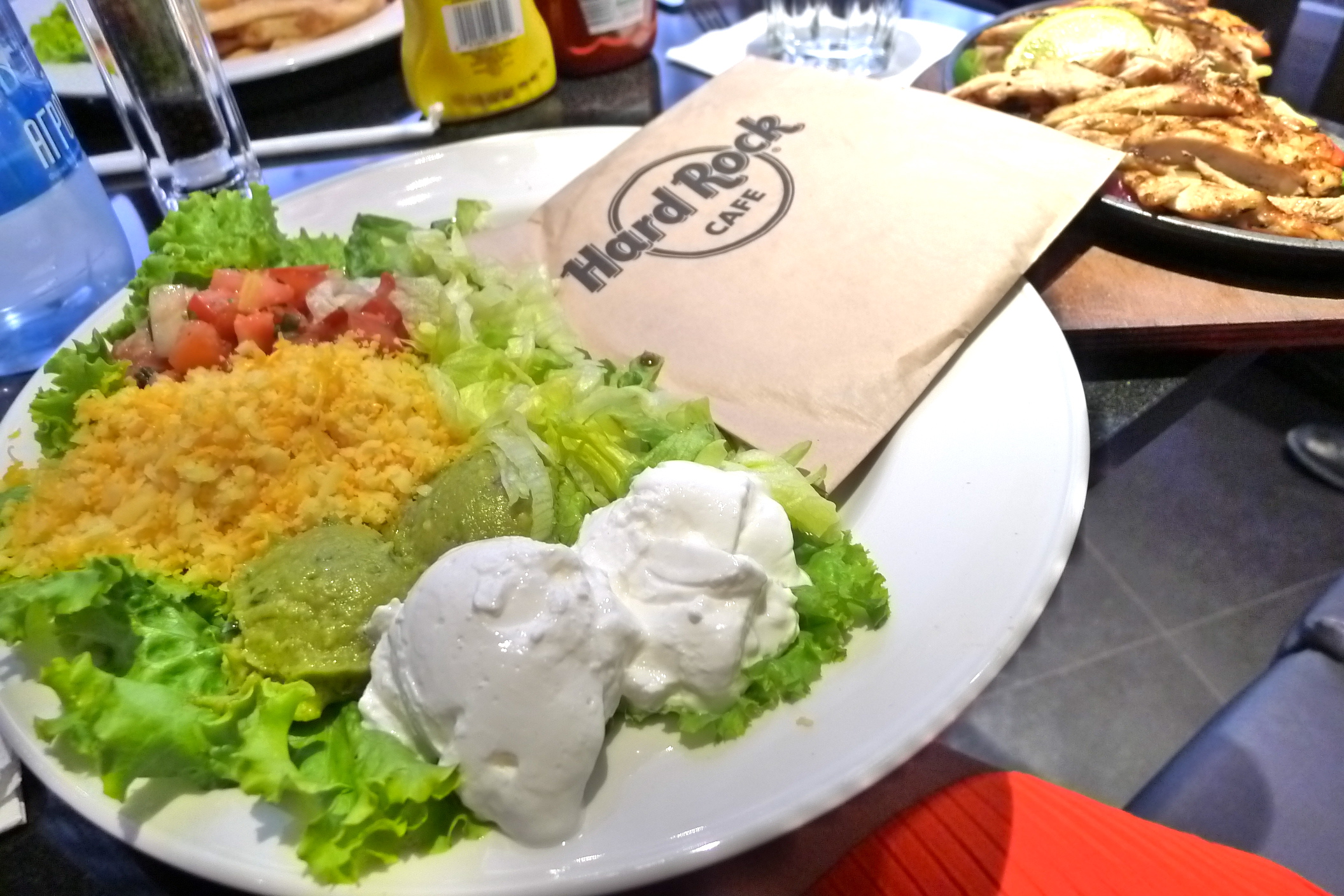 behind it are very strong and beyond any food review. Nevertheless, I decided to continue, as I would have with any other restaurant.
The space: apart from the fact that it is massive (4 floors if I am not mistaken), it is an updated version of a typical Hard Rock Cafe. The fact that there is a bar to have a drink while you wait and a large terrace upstairs for the smokers is a nice adjustment for Cyprus tastes. I generally found it a bit too much but since I am not a loyal Hard Rock fan I cann really judge.
The menu: very American as expected including a list of rich and tempting starters (so forget that diet), as well as a choice of fajitas, steaks, veggie dishes and of course, burgers. I will not even begin to write about the dessert list that includes a list of sins like hot fudge brownie and fresh apple cobbler with walnuts, caramel and ice cream. Go hungry!
The food: We were a party of two people, therefore we decided to go for a main dish each and share a dessert rather than starters. Even though I wanted the biggest burger they had, my proud Cypriot friend also wanted one so I decided to try the chicken fajitas instead. The legendary burger, which we have been anticipating for a year included two layers of cheese and bacon and was only fairly good but nothing more than that. My expectations were very high and probably why I wasn’t extremely impressed. Nevertheless it looked great but tasted like an average burger. When I ordered my fajitas the waiter warned me saying “wow I hope you are hungry” in an intimidating way. The fajitas were good and did appear to be a big portion but I soon realised it didn’t taste as big as it looked! Don’t get me wrong, the flavours as such were OK and it came sizzling hot. It simply wasn’t the massive and excessive American portion I thought it would be. I have to mention that we got free refills on our cokes, a nice addition in periods of economic crisis.
For dessert we were recommended the brownie by what seemed to be the manager who unexpectedly came to chat with us, and we happily ordered it to share. In all honesty, the brownie as such might have been good, and so was the fudge on top but it unfortunately had been disguised and, in my opinion destroyed, by 3 scoops of vanilla ice cream and even worse, ten kilos of fresh cream. The fact that they were all served in a humongous ice cream bowl made it hard to even find the brownie!
I find it a bit pointless reviewing Hard Rock as I know most of the Cypriot population will go at least once to try it out. My humble opinion is that, as long as the food is not horrible rock fans will keep it alive, and the rest can go once in a while to enjoy a full fat American meal for around 30€ each. We actually paid 23€ each but without alcohol or starters.