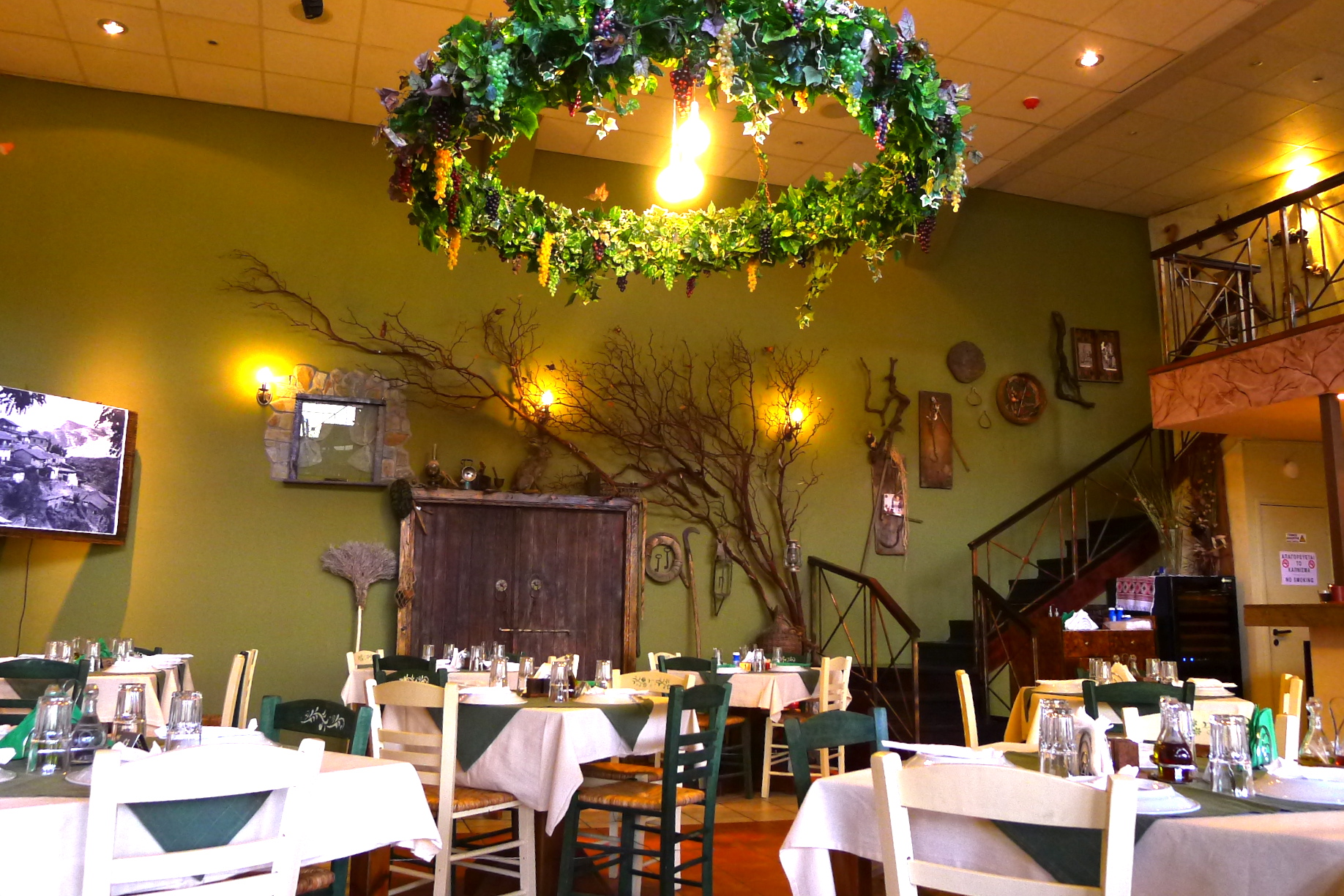 Kalopanayiotis village, 99130275, Nicosia District
Food: [rating:3] 3/5
Service: [rating:3.5] 3.5/5
Ambiance: [rating:3] 3/5
I would never have thought discovering good tavernas in the mountains would be such a difficult task. Asking around helps but it really depends on who you ask. Nevertheless, despite never having heard of “To Palio Cinema” (The O ld Cinema) in Kalopanayiotis village before, it wasn’t bad at all, a combination of a cute ambiance and good food with extra “delicacies”.
It is situated in the centre of the village and it has a small terrace for outside seating while the décor inside is sort of cute and traditional. I didn’t like the fact that it was a large room with lots of tables but it is evident that more effort has been put into decorating it in comparison to other restaurants of its type. The chandelier covered with vine leaves, the cute coffee cups on the wall and the old pictures warmed up the room and added a pleasant vibe to the taverna’s ambience.
The menu was standard. They offer some “meze” dishes with either “souvla” or “kleftiko”. The starters were promising and included a nice Greek salad, tahini that seemed to be homemade and beetroot. Within 5 minutes from when we were served the starters, the “pasticcio” also arrived, together with a large platter of fried lamb liver. The “pasticcio” although not very hot was very good. The fact that it had very little béchamel might upset some people but I actually preferred it that way as I prefer the pasta and the minced meat to the cream. The fried lamb liver was also tasty with what was presented to us as an added treat of what seemed to be fried kidneys. Being quite picky with the latter I wouldn’t have eaten it, but as it didn’t smell bad at all and was mixed well with the liver I tried it and was pleasantly surprised. Less than 2 minutes after the liver and the pasticcio had arrived, and a total of 7 minutes since the time we ordered, the “souvla” was ready. Since we had not even have time to finish the salad and the starters we asked them to wait. Having all the dishes arriving at once is something I hate since instead of taking the time to enjoy each dish, we find ourselves eating faster than dogs.
A while later when we had time to enjoy what we were served we asked for the main course. The roast potatoes were excellent, quite savoury and perfectly cooked in the oven covered with oil, something that reminds me of my childhood. The “souvla” was quite good in terms of taste but the meat was not very tender, probably because it wasn’t as warm as it should have been. This was probably our fault for delaying its arrival, but their fault for serving cold starters, warm starters and main course all at once. That didn’t stand in the way of us finishing it off and actually enjoying everything. I also finished the “baklava” that came at the end which was loaded in honey and was a bit too sweet, but it I desperately needed a sugar kick with my Cypriot coffee.
Despite small issues here and there the verdict was positive, firstly because of the place itself and secondly because of the good food. It is not the best that I have ever had, but rumour has it, that it serves a lot of delicacies that are hard to find, especially in the birds and poultry category!