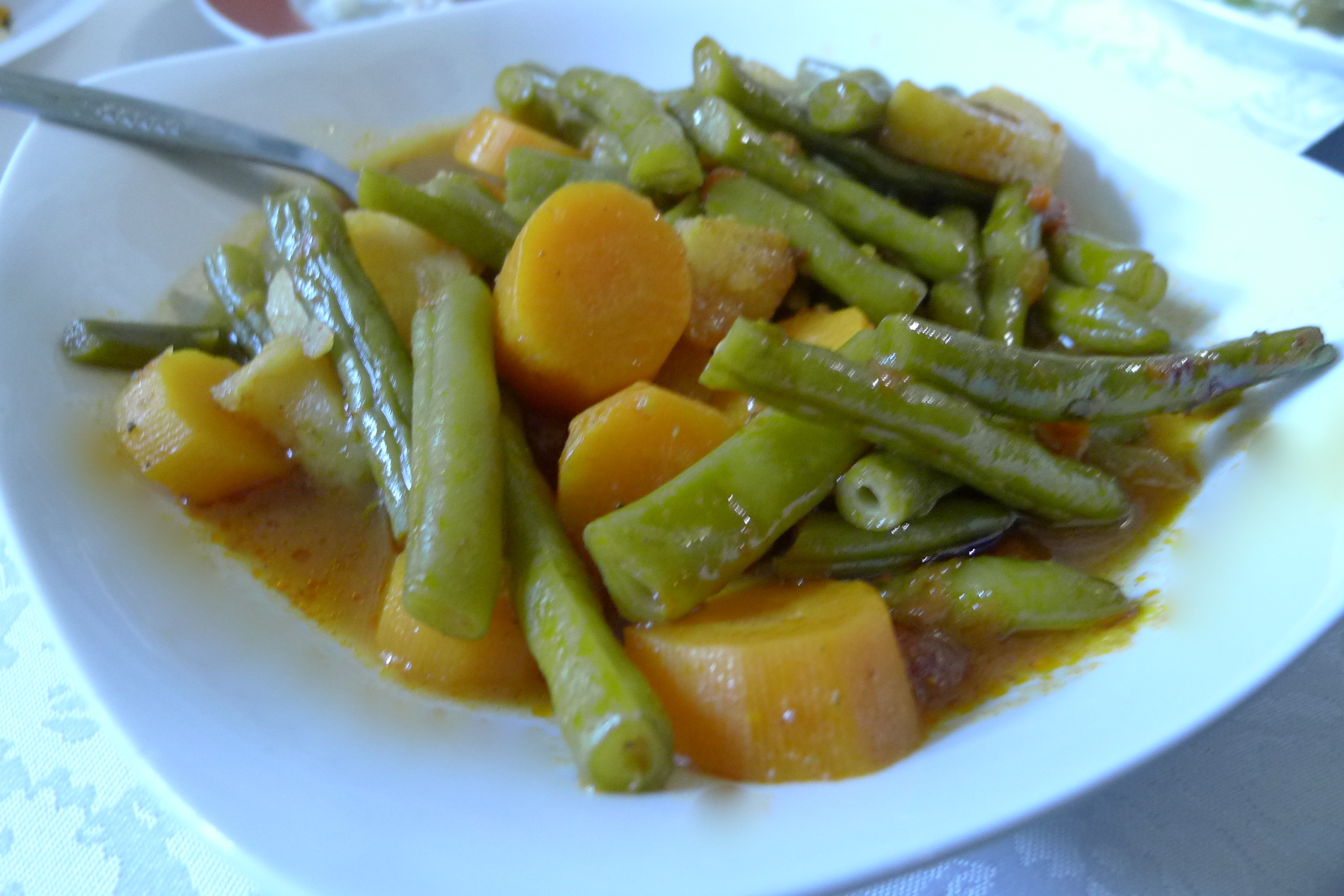 dings, the food was surprisingly good with an extremely wide choice of “meze”. If you are lucky enough you can also enjoy it under a 105 year old “Platanos” tree that is big enough to cover an acre.
We went on a Sunday for lunch (we had been told that it’s the best time to go as the selection of “meze” dishes is larger than on a Saturday).
We ordered “meze” for 4. We were warned on the amount of food that was about to come but we politely (and wrongly) ignored them and ate two bowls of salad and all the dips in 10 minutes. The “pourgouri” and the “makaronia choriatika” (traditional pasta with halloumi cheese) which arrived first were good although there was some water in the pasta dish. The “pasticcio” was excellent with a fat layer of béchamel and perfectly spiced minced meat. As an extra to the traditional “meze” they offered “zalatina”, a sort of pork jelly that is considered a delicacy and was in fact, excellent perfectly lemony and full of flavour (it also came in a generous portion). Th e “souzoukakia” (meatballs) that came in a salty and spicy tomato sauce were also something different and a nice addition to the “meze”.
Up to this point, the only issue we had was that all the dishes were at room temperature rather than sizzling hot. I personally don’t mind but the proud Cypriot family who are obsessed with hot food, complained. From then onwards, everything came boiling hot, which we though was a very kind gesture as they took our complaint in consideration immediately. The green beans with tomato and potatoes (“fasolaki”), that arrived was excellent being savoury and tasty without it being too mushy. The biggest highlight apart from the “souvla” in my opinion was the salted dried meat (“pasto”), which consisted of traditional sausage and pieces of pork with wine that tasted like “afelia”. They were indeed very tasty with an extremely salty taste and a strong flavour of wine and spices that made the dish a fantastic delicacy. As if this wasn’t enough, right

at the end we were served an excellent “kleftiko” (slow cooked lamb), that was so soft it melted as the fork went through it. The fact that it wasn’t soaked in its own fat and water was an advantage. The final dish to arrive was the “ttavas” (slow cooked pork with rice and tomato) and prepared in the “Lefkara way” that is supposed to be the best. It was fairly good, even though the rice was a bit too soft for my taste.
The biggest surprise came at the end. All of the above, together with an “anari baklava” (phyllo wrapped in traditional cheese and cinnamon), cost 18€ per person. Together with a jar of house wine and two cokes we paid less than 20€ per person. The fact that we were served a much wider and different selection of “meze” dishes, almost all of which included lamb or pork (so it wasn’t that cheap to make), yet it cost similar to other tavernas was a massive plus. The space might be nothing special but definitely not something that got in the way of us enjoying our lunch.

Uncategorized
510
0
Halloween is way over but pumpkin season is not! I never used to like pumpkin, mainly because I hated “kolokotes” (Cypriot pumpkin pastries), but then after randomly having pumpkin bread, pumpkin pies, pumpkin ravioli...
Read more

all posts by date  recipes
693
0
Although I love making new recipes and I am obsessed with cook books, I always find myself often going back to those recipes who are easy to make and delicious like pasta Bolognese, home-made...
Read more

all posts by date  recipes
794
0
I don’t know about you but for me there are some dishes which are staple meals for my family like Cypriot style fish in the oven, veggie or beef fajitas and of course, spaghetti...
Read more

foodie news & other announcements
1090
0
Probably the best thing I have done this month is have aperitivo by the sea at Ventuno Aperitivo, and I mean a PROPER Italian-style aperitivo: pay for drinks and get a buffet of delicious...
Read more

foodie news & other announcements
689
0
NOA, the beach front seafood restaurant has hosted a lovely evening of Fish vs Meat tasting menu paired with alcohol (cocktails, beer and wine) which was indeed delicious with dishes from raw tuna carpaccio...
Read more