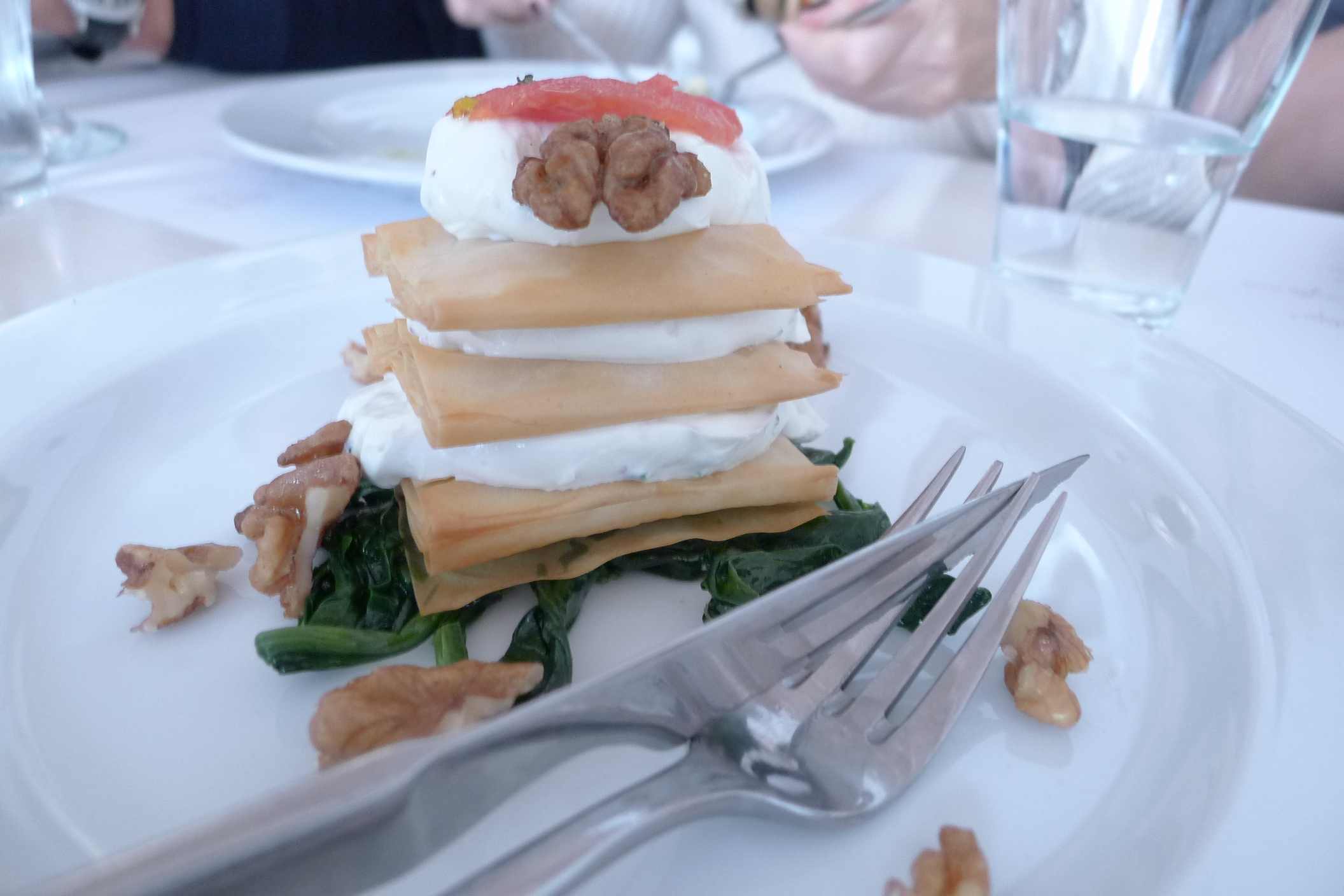 improving. The very kind and friendly owner has been taking criticism in consideration to, firstly improve his food dramatically. He has led Souxou Mouxou into one of the top quality restaurants in the capital. Secondly, even though its décor has always been very cosy with a traditional touch there have been constant modifications over the few years to keep it interesting.
We went for Christmas Eve lunch to enjoy somewhat local food fused with Souxou Mouxou’s touch. I find that it is a safe choice for both lunch and dinner on any day of the week as it is almost always full. Fortunately we were a group of four that made it easier to share as many dishes as possible.
As starters we shared the carameliz ed zucchini croquettes that came with a light yoghurt sauce and were extra soft on the inside and perfectly crunchy on the outside. The taste was light despite being deep fried. The cheese millefueille was a highlight with a triple cheese layer separated with light philo. Fortunately the cheese was not too strong that made it very easy to devour the whole dish. The waiter recommended a dish that we had to have: the oxtail. What came was a sphere wrapped in what seemed to be spinach leaves and kept the meat inside as a surprise. This was my second favourite as the meat was full of flavour and the light sauce balanced it out. Finally we had the pleasure of trying the red mushroom salad offered to us by the waiter while we waited for our friends as that is also worth trying but I would think it is seasonal. For main courses we ordered of course, the “kotsi” (chunk of pork from the pig’s hip), which is another personal favourite. My suggestion is to let the waiter cut it for you as my attempt to cut the big chunk resulted in eating only the skin. My second favourite, a dish that never leaves the menu, is the ox cheeks (“magoulakia”) served with mash potatoes. The meat is so soft and tender that literally melts in your mouth. The traditional “mpifteki” was quite good, even though I expected it to be better. The taste was up to standards but I was hoping for it to be more flavoursome and be a thicker burger, rather than two thin burgers with no sauce or cheese. The chicken with parsley sauce and mash potatoes was good in taste but I thought it was too simple and nothing compared with the “kotsi”.
Being full (and fulfilled) did not stop us from trying desserts. The “milk pie” which was a tasty creamy substance wrapped in philo was fantastic and quite light. The traditional ravani with ice cream that was simply a spongy cake with a sticky feel (like a “shamali”) was surprisingly good for someone like me who doesn’t like “shamali”. The empty plates at the end clearly reflected our opinion.
Having a very good meal with freshly prepared dishes in a pleasant, cosy yet buzzy ambiance was more than what we could ask for. The fact that the menu changes often makes the customers return without a second thought. We paid 40€ each and left full after having a three course meal with good Greek wine.