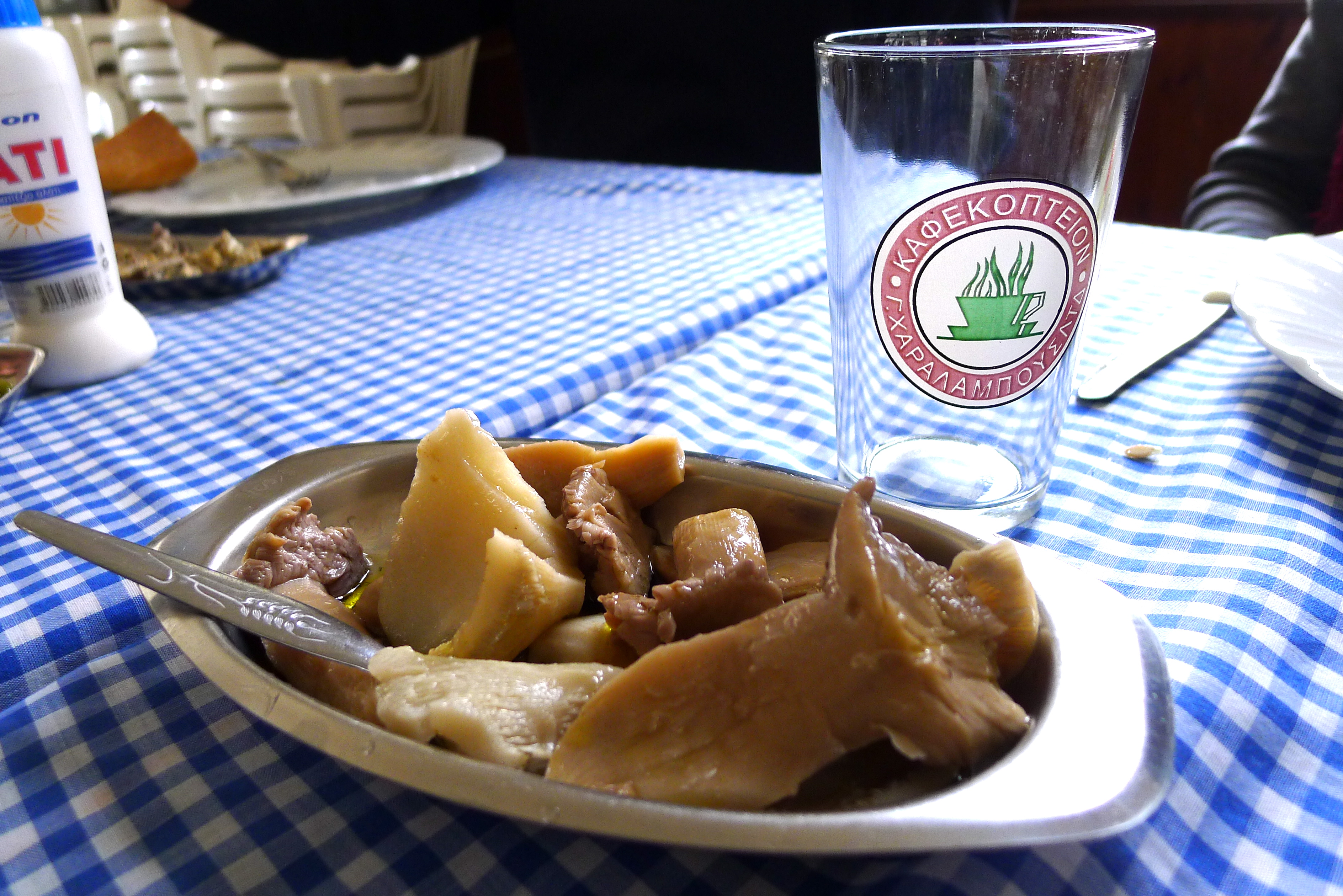 Centre of Kaminara village 97804067, 99945975, Limassol District
Mon-Sun lunch (reservations only)
Food: [rating:4] 4/5
Service: [rating:3] 3/5
Ambiance: [rating:1.5] 1.5/5
The question I am being asked the most is where I get information for new places to review. The truth is that finding out about new openings and special places in the city is not that difficult as flow of information is definitely faster and simpler. The big problem is finding out about tavernas in the villages surrounding the cities. Cyprus guid e books do not have a lot to say about such tavernas, as any tavern mentioned is almost always described as having “a pleasant environment and good food”, making choosing a taverna pretty hard. That’s why I am the proudest Cypriot when I discover really special places in obscure villages – because then I can share them with other proud Cypriots and also (hopefully) help the tavernas themselves.
Leonidas in Kaminaria is a strong example of a truly special, humble and old school taverna which serves food that is truly (and literally) homemade.
Just to clarify, it is not actually a taverna, but a “kafenes” (traditional coffee house where average age of clientele is probably greater than 60). Mr Leonidas is the owner who is a Kaminaria local. He operates the place as a “kafene” and whenever someone calls and asks to have lunch there Mr Leonidas’ wife prepares a selection of traditional dishes for the guests. She does not only prepare proper home made dishes, but she does that from what is probably her actual kitchen at home. Don’t expect luxuries and cute traditional village décor as the space consists of a very basic room with something that we can call a fireplace, plastic chairs and 2 walls decorated with random posters from the 80s.
We called a couple of days beforehand (recommended), and informed Mr Leonidas that apart from the standards we love “pasticcio” (macaroni with béchamel), greens with eggs and meatballs. The rest was up to him.
It is really pointless to go through each and every dish we were served as every single one was delicious, made from the freshest vegetables and meat of the highest quality. I should note that the fried liver with tomatoes and onions was excellent, the fried meatballs were better t han my grandmother’s (which is almost impossible), and the sizzling hot “souvla” with roasted potatoes was also amazing. In addition to all that we had mushrooms with vinegar and greens with eggs.
The highlight of the meal was not the home made “zalatina” which I hate but Mr Proud Cypriot and the proud Cypriot father went crazy for, but something that I was never offered before: a fried egg for each of us cooked in the leftover frying oil of the day (“μαυρόλαδο” as he called it). I even tried to say that I had enough to eat before we were offered the said egg, but clearly I finished my egg before my plate barely touched the table.
Needless to say that I am sure Mr Leonidas wanted to laugh when I asked if they had yoghurt and he had to search for just a little bit of “tahini” that he had from the night before. Despite that, he offered us some house wine (served in a large Zivania bottle) that the rest of the proud Cypriots had, as well as proper Zivania, soft drinks and water.
All of the above for just 18€ each! What made the experience a really special one was not just the food, but also the fact that we enjoyed our meal in the company of the locals (and they aren’t many), in a quite basic and sort of decadent space. There was only one more table and a local hunter who literally sat with us. He was proud to be the youngest resident of Kaminaria village (and was around 45 years old). Remember to call beforehand, and don’t forget to say you saw it on Cypriot and Proud!