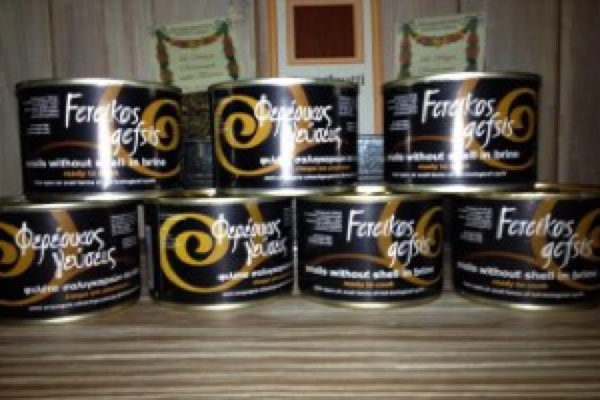 all posts by date  my blog  Uncategorized

I am always very intrigued by the success stories of young people who made it on their own. It seems that in these periods of economic crisis and unemployment they can be even more inspiring as more and more people find opportunities to implement their ideas and explore ways of innovation and creativity.
This is one of those cases where everyone says “I could have done that”, but the fact is that no one was smart enough or brave enough to do it, except these daring and innovative young girls. So, how does one get the idea to build an organic snail farm? The story:
Fereikos (meaning “bring + house”) is owned by two young Greek girls, Maria and Penny and is the first Greek company that farms snails to then sell them on to buyers in Greece and abroad. The organic snails are either sold alive in their shell or in jars and tins to help preservation for future use. The process started in 2007 and the official company of Fereikos Gevsis which sells jarred and tinned snails has been operating since April 2011. Since then, it has managed to establish itself as one of the biggest exporters of snails worldwide.

How did this business start?
A few years ago, Maria (who speaks 9 languages and was way too qualified to be hired anywhere in Greece), was dining in a restaurant in Switzerland. She then called her sister to tell her how surprised she was that an escargot dish cost as high as 35€ due to the extreme shortage of snails in Europe. What she then didn’t know is that her sister would spend the next 6 months exploring the supply of snails and come to the conclusion that in fact only 10% of demand is satisfied. That was when it all begun. After a few courses as well as a lot of discussions with geologists and specialists, the two girls managed to build their first organic snail farm in their grandfather’s plot of land in Korinthos.

How does it work?
Each snail farm is built in a plot of land using natural methods only. The snails feed themselves only with flowers and the soil and water used for irrigation is regularly tested to meet the terms for the “organic” label. Each snail takes a year to come to “adulthood”. Their age can be identified from their shell size. The snails are then not fed for 15 days after w

hich the snails undergo a process of cleansing before they are either sold alive or boiled and preserved in a jar or tin.

How can they be sold alive? Don’t they have to be eaten immediately?
When the snails are taken anyway from their natural habitat they retreat into their shells and form a protective “door”. In this way they can stay alive for longer, assuming their shell doesn’t break. In the past year and a half, Fereikos have added to this natural preservation process by creating more efficient packaging in jars and tins that allows the snails to reach your home and mine (as well as to be exported further away).

Surely having to buy 168 plots of land for the farms must have cost a lot of money:
In fact they don’t own the land, but oversee a number of snail farms nationally. They have agreements with landowners to use their land to farm the snails, and then buy the snails back at a fixed price. In this way the land-owners use their land efficiently and Fereikos doesn’t have to spend funds to buy all the necessary land. Fereikos has created a number of jobs across Greece and in fact their story is often used as an example of companies that have improved the Greek welfare over the past few years.

Why is there such a big demand for snails worldwide?
Even though a lot of people might not realize this, snails are extremely nutritious. As well as an ingredient for delicious recipes, snails are also used in cosmetics as they have large amounts of collagen and in medicine (snails have been used in medicine since the ancient times). The fact that they are in the group of molluscs (like calamari and octopi) means that they don’t have a bloodstream, which makes them “cleaner” according to some people. For this reason they are also appropriate for Greek Orthodox “fasting”.

A lot of people think they are a disgusting little animal that looks dirty. Is that a problem?
I was actually one of the people who wouldn’t eat them. I was even worried before attending the Fereikos presentations because I knew I would have to try them. The truth is that after meeting with the girls and listening to their story I have completely changed my mind. Firstly, they are much cleaner since they don’t have a bloodstream and they only feed themselves with flowers. Secondly when you have them boiled as they are served in Cyprus in my opinion their taste is much stronger (like any type of boiled meat or fish). If you have them in a pasta sauce, or on a bruschetta like I did I am sure you will change your mind.

So where can one buy them from?
They will soon be available in all the big supermarkets as well as in a selection of delicatessens. You can also find them at the new restaurant and delicatessen, Limoncello in the Agios Antonios market.

Where can I find these delicious and nutritious recipes?
There are some on their website here

foodie news & other announcements
1004
0
NOA, the beach front seafood restaurant has hosted a lovely evening of Fish vs Meat tasting menu paired with alcohol (cocktails, beer and wine) which was indeed delicious with dishes from raw tuna carpaccio...
Read more