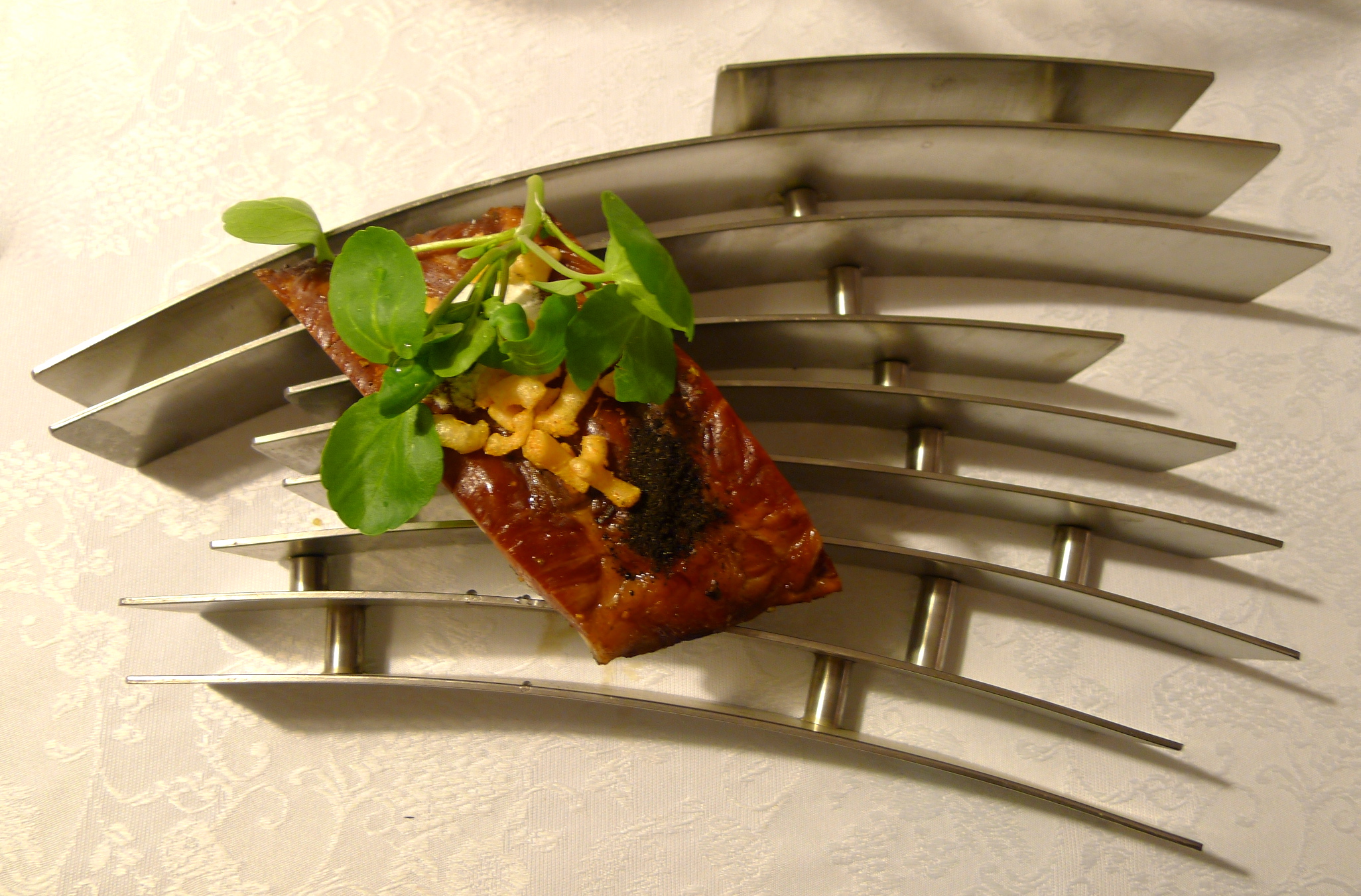 Petros Andrianou, 99669092
To hire Petros for a dinner party or for information contact him directly
There is one very important ingredient to any kind of successful restaurant, cocktail bar, film, play and even an exhibition: the element of surprise which is often combined with the lack of expectations. When the proud Cypriot mother invites you to a dinner to be prepared by a chef you don’t really know in your own house, it is hard to avoid this very imperative element. If none of the people invited (or anyone else you know), has tried this out determining what to expect is even harder!
The only time I have met Petros Adrianou, was at Vino Cultura where he used to work last year. He was obviously talented as one could tell that the food he prepared was particular, imaginative and original. What I didn’t know is that since he left the restaurant he has started his own project, something that, just like his food creations, aim to lead the way of the Cypriot culinary space into the new era. 3 Forks Tecto-Sensory lab as he calls his business has been created to start new dining concepts, to innovate through combining food with graphic, industrial and conceptual designs, to join the aesthetics from architecture and design with food and how the whole experience is conveyed to the brain. If you visit some of the Michelin star restaurants that he says he got some of his influences from like El Bulli (yes THE El Bulli a number one restaurant on the San Pellegrino list for many years), Pierre Gagnaire and Michel Bras (all three-star of which are Michelin restaurants), his vision could make more sense. The way he plans to use these experiences is by providing the following services: consulting restaurants and other chefs and (my favourite): offering private dining experiences for clients. In other words he can come to your house and prepare a meal which combines all of the above for you and your friends upon request, which is exactly what he did for us on a random January weekend.
The first indication of what was to come during our dinner to be prepared by Petros was when I walked home at 5:00pm on the day of our dinner and saw the ingredients that were to be used on set out on our kitchen bench. These were brought in by himself in three hard suitcases. The second shock came when I saw the custom made “plates” or “stands” that part of our 11-course meal would be served on. Our 8-people party started arriving at 8:00pm for an aperitif. Half an hour later we were ready to start. The first course consisted of tempura rose petals in a chocolate and rose capsule with a bitter sweet crispy flavour and it was waiting for us on the table. This was a good indication of the complexity and originality of the ingredients and flavours that were about to follow. The next dish was a blackberry covered in a yoghurt crust with anchovies in a Blue Mountain Coffee, sesame oil, blackcurrant concentrate and lime sauce. This was served on a pebble and I found it to be an explosion of flavours which blended sweet, sour and savoury flavours perfectly and in my opinion was one of the most impressive courses from Petros’s selection.
The dishes to follow were a combination of Eastern flavours using western ingredients. One of my favourites was the smoked salmon in Yuzu zest with a ginger reduction, beer and cashew nut cream, a Eucalyptus aroma and quinoa and rusk dust which in my eyes was a smoked salmon slice with an aromatic sweet and sour feel that balanced the salty flavour of the fish. Another dish consisted of two tuna cubes, one of which was accompanied by a piece black garlic (something I didn’t even know existed), while the second cube was served with nori, ginger, soya paste and a mushroom dust. I found this dish an amazing an example of where a simple and plain tuna fillet can take you.
The fresh Cyprus shrimps with green tea, popcorn sauce and Souchong and Perles de Jade tea was another a example of how local and familiar tastes in combination with exotic flavours can be transformed into a new and unknown taste I could never even have imagined.
The most memorable main course in my opinion was the smoked spare ribs in piri piri spice mix with Basque honey, yoghurt purslane and sea water which was served with puff potatoes (picture at the top), served on a custom made metal structure that, to my mind, looked like a veranda rooftop or the side of a staircase. Perhaps it was the strong savoury taste of smoked meat and the puff potatoes which reminded me of my childhood and in combination with the weird “plate” ensured this dish stayed in my mind.
The only dish I actually didn’t like was the “winter vegetable landscape” that was essentially beetroot with different herbs and spices. I passionately hate beetroot in all its forms hence it was difficult for me to even try it. Fortunately Mr Proud Cypriot downs everything, especially veggies so it didn’t go to waste.
The perfect end to a meal was surely something to talk about and consisted of more local “humble” vegetables as Petros called them, such as artichokes, peas, broad beans and “hostes” roots combined with crab in lemongrass, a Thai basil emulsion and cigar tea. I never knew dining at home could turn out to be such a culinary experience. In combination with our 4 different types of wine (bought by us as it is not something he is responsible for, although he is happy to make suggestions), was a culinary experience never to be forgotten. Regardless of whether or not the taste of every single dish was impeccable (and most of them were in fact out of this world), the combination of ingredients and imagination used to create them was in itself a work of art.
Now the semantics:
Cost? It depends on the preferences and requests of each customer. It can range from 50€ per person to 150€ per person. The menu changes every time as it highly depends on the season (Petros grows a lot of the herbs himself) and on the client’s tastes. Needless to say that a meal like this would cost significantly more had it been enjoyed at a restaurant of this type.
How to contact him? He needs to know at least a week in advance so he can prepare. Another piece of advice is to keep the group number from 6-8 people.
If you are looking for burgers and pasta, he is not for you. If you like trying new things, putting yourself through the unknown and taking a risk then you better call him.