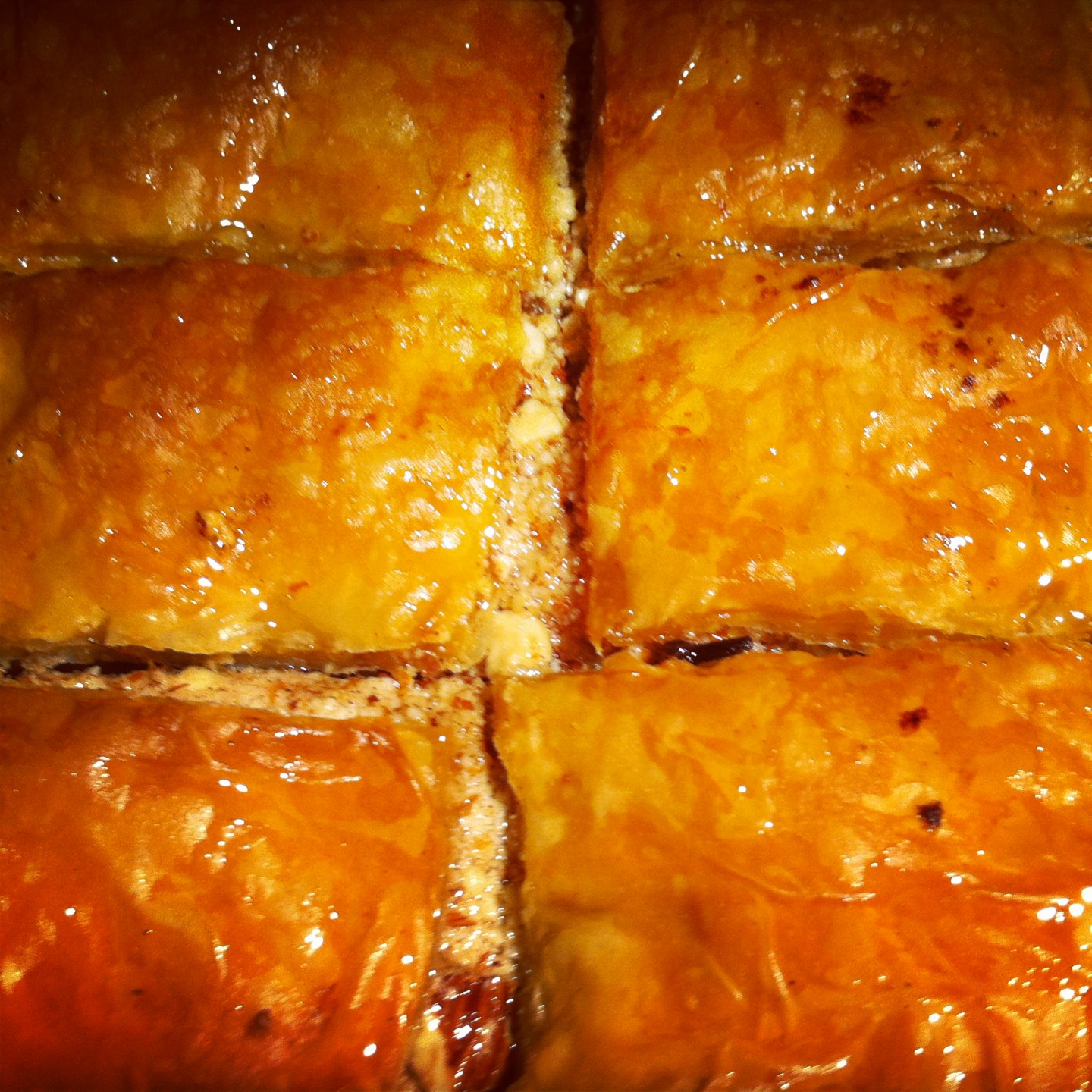 all posts by date  recipes  sweet

Mmmm Chocolate. Mmmm Baklava. I won’t deny I have a sweet tooth. When I was little and refused to finish my dinner, I still wanted dessert. My mom asked how this was possible if I was full. And I explained that I had three compartments in my tummy, one for dinner, one for drinks and one for dessert. My point being, there is always room for dessert. And for dessert this week I couldn’t decide whether to make something chocolate-y, or something traditional, so I thought I’d try a mix. It turned out quite well – I was a bit worried the chocolate and the syrup wouldn’t go together, but I think the trick is to add only a little bit of good quality chocolate to the mix. This recipe is a combination of two – “recipe 349” from Fotini Evangelatou’s seminal “Cyprus Country House Recipes” and Emeril Lagasse’s Baklava recipe from “There’s a Chef in My World”.

1. Make the syrup first.  (Note that the syrup is a little “honey-heavy” in my opinion, but it is also what helps make the syrup become thick and tasty. Next time I might add 3/4 cup honey instead of 1 cup.) Mix the sugar, honey, water, lemon juice, cinnamon sticks, lemon zest, cloves and cardamom in a medium saucepan. Cook over medium heat, stirring occasionally with a wooden spoon, until the sugar has dissolved. Reduce the heat to medium-low and cook until the syrup is slightly thickened. This takes about 7 to 10 minutes. Remove the cinnamon sticks and lemon zest and set syrup aside to cool.

3. Melt the butter over low heat in a small saucepan. Preheat the oven to 176C.

4. Next, using a pastry brush, grease an oven proof dish (about 35x23cm) with melted butter.

5. Repeat after me “I am not afraid to work with filo”! Yes, it’s finicky! But, open the package and then place it on a flat surface and cover it with a lightly damp kitchen towel. 7. Place 1 of the sheets of filo in the bottom of the buttered baking dish and lightly brush it with some of the melted butter.  Do this again with 6 more sheets of filo, for a total of 7 layers. Spread about a 3/4 cup of the nut and chocolate mixture evenly over the buttered filo sheets. 10. Sprinkle the top of the baklava with a little water and bake until it is golden brown. This usually takes about 40 minutes.

11. Remove the baklava from the oven and set it aside to cool for about five minutes. While the baklava is still hot, poor the cold syrup over the baklava. Allow the baklava to stand for several hours before serving!