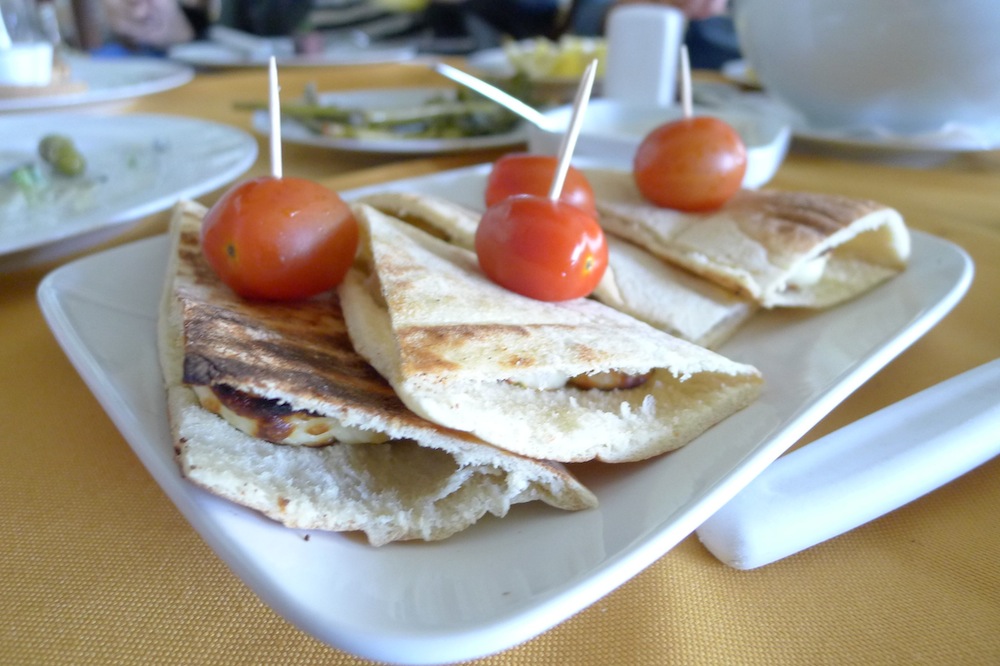 Saranti Village, 22652315, Nicosia District
Fri dinner, Sat-Sun lunch & dinner
Food: [rating:3.5] 3.5/5
Service: [rating:4] 4/5
Ambiance: [rating:2.5] 2.5/5
I get a feeling that my mountain touring and taverna tasting days will soon be over as the weather is getting better and the beach is calling me. My to-try list is not getting smaller though (!) so until the beach days arrive my search for the best taverna continues. My first reason for wanting to visit Fountoukia is that it is situated in Saranti, a village that one does not hear about every day. My second reason was rumours of a very good homemade “galaktoboureko” being served at this particular restaurant.
Getting there was quite easy – a mere 40 minute drive from Nicosia. The route (and in particular the last 15 minutes of it) is truly beautiful. On our way there from Nicosia we found the Lagoudera dam by Xiliatos village and enjoyed the beautiful drive through the dark green forest surrounding the area both of which add to the reasons why Saranti is worth a visit.
The taverna itself is of standard size but has a large terrace. Unfortunately it was too cold to sit outside but I would love to return in the summer and sit below the “fountoukia” (walnut) tree. Upon entering, I saw a typical Cypriot grandma with the black “mantili” wrapped around her hair and wearing an apron in the far end of the kitchen, that was a good sign that the chances of having a good meal were high. The fact that two young 10 year old girls were serving up the food and their father was taking orders confirmed my suspicions that  the restaurant was a family run business, a trait which I think adds to the quality of the food since the love one prepares it with is big.
All the evidence was there and I was right. Even though the food included the usual dishes, they all tasted and were homemade with fresh vegetables and tasty meat that actually had less fat than meat. The fried meatballs (“keftedes”) were hot and had a strong taste of cinnamon which I loved. The zucchini and eggs with grated cheese on top were tasty but quite standard.  What was indeed memorable was the fresh hand-cut fries (which reminded me of the “fried eggs and fries” lunch that my grandma used to prepare for me every Saturday as a child) and the lamb chops which were full of flavour. The pork kebab was also good but I don’t pay a lot of attention to the kebab as I think that they are all very similar except the ones which are truly inedible. The “halloumi” in pita bread was excellent – it was hot and soft, melting at every bite just like hot mozzarella – in a few words exactly as I like it.
The only thing that went wrong in my opinion was the fact that they didn’t have “galaktoboureko” (which was one of the most important reasons we visited Fountoukia in the first place) because it is Lent fasting season. Had our lunch not been fulfilling I would have been really disappointed. The fact is that we remained truly satisfied with our lunch (especially since we were offered honey pies in the place of the “galaktoboureko”) and so none of us complained. The cherry on the cake was when the bill came at 64€ for four people with wine and a diet coke, meaning it was less than 20€ each.

Tags: restaurant, €€
Share:
30% discount at Brasserie Au bon Plaisir
Where to find the sweetest gems of our time: Part II