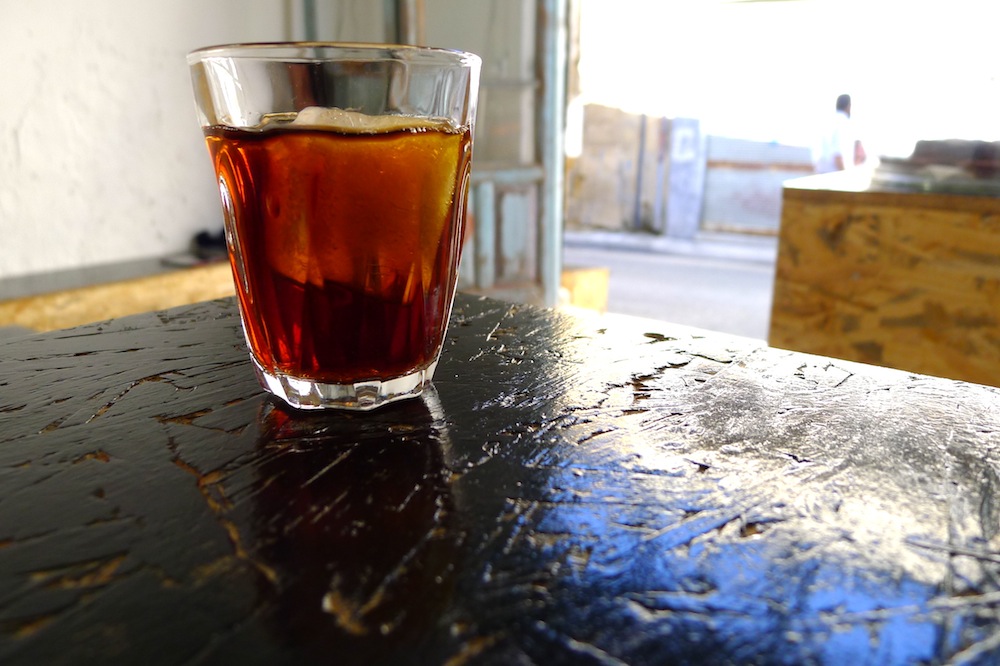 city”, “best coffee I have ever tasted”, “coffee gurus” are only part of the description I was given about this coffee bar, fortunately all true! “A κχoffee project” (“κχ” coming from the initials of the street name), is the latest coffee bar in the city, and on that, even though it has started as a pop-up I am sure it won’t stay that way.
Firstly I should describe the concept of a pop-up (or rather let wikipedia do it for me): Pop-up restaurants, also called supper clubs, are temporary restaurants. These restaurants often operate from a private home, former factory or similar and during festivals. Pop-up restaurants have been popular since the 2000s in Britain and Australia but they are not a new phenomenon. […] Diners typically make use of social media, such as the blogosphere and Twitter, to follow the movement of these restaurants and make online reservations.[ […]
Pop-up restaurants have been hailed as useful for younger chefs, allowing them to utilize underused kitchen facilities and “experiment without the risk of bankruptcy”.
What makes it more of a pop-up in this case I think is the fact that: it has been casually created in a gallery space (APOTHEKE)- another reason why it is uniquely different. It is owned and run by a young couple whom I can comfortably and confidently describe as coffee gurus in collaboration with the founder and owner of APOTHEKE. They have started it because they love coffee, and they have let people know that is open only via social media (Facebook). After having stood up my friend for 1.5 hours I had finally made it for my after-lunch espresso.
What I loved about it initially was the fact that it is located in an alleyway surrounded by warehouses and old working spaces, rather than on the -now- popular Onasagorou street and Phaneromenis area, which is great for a more quiet afternoon. Furthermore, for those who are tired of the modern, shiny, flashy, rustic, rusty, worn-out-but-new and vintage decors and have come to basics (like moi) you will love it. The “blunt” and “raw” space is decorated with handmade (mia lexi) stools, benches and of course, a casual coffee-bar across the side of the space, all of which gives the place its character. As for the outside space? Despite having a couple of benches on the half-a-meter-wide sidewalk you can chill out on the sidewalk or in fact, anywhere in the street itself. One of the reasons that I think the tag “coffee-bar” is appropriate.
The highlight however is neither the space, nor the concept, but -surprise surprise-, the coffee itself. I have been drinking coffee since I am 15, I have lived in Italy, I have tried all kinds of coffee in different places but I must admit that some of the coffee making “tools” (as they are not machines) they use I have never seen before. Apart from a delicious not very acidic and flavoursome espresso, one can try their Americano or a flat white cappuccino. Their iced latte, their first coffee that I had tried is delicious and makes one get to know coffee all over again. My favourite (and a lot of people’s favourite by now) is the “cold drip” made by the weird looking machine at the end of the bar that looks like a chemistry tube. As I was told, to make cold coffee, instead of making an espresso and then adding ice to it, they let cold water in ice drip over a cylinder with ground coffee and in turn, let it drip in a jar. It takes something like 5-7 hours for a small jar. Christos, one of the two coffee gurus (and father of κχcoffee project), using an accurate balance adds ice and cold drip coffee in a short glass while weighing and measuring the exact quantities of each to make sure he doesn’t overdo it with either. Now this is what I call attention to detail!
For all of those that usually would have had a milk shake, juice or ice tea I am afraid you will not find your drink here. You can however find a special “cascara” tea, an aromatic and rich tea made from old coffee shells. The non-coffee or tea lovers can have a home made lemonade to freshen up. All of the above for 2-3€ each.

all posts by date  recipes
1485
0
I don’t know about you but for me there are some dishes which are staple meals for my family like Cypriot style fish in the oven, veggie or beef fajitas and of course, spaghetti...
Read more