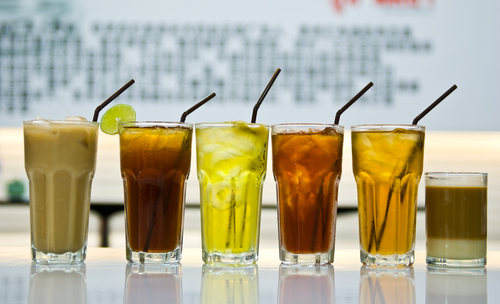 Several times we have come up against questions about soft drinks. Issues arising from obsolete perceptions and misconceptions! Please find below the answers, documented by the latest scientific evidence:

Soft drinks cause obesity?
Answer: Weight gain is caused only when the total energy received is greater than the one we consume. This “energy balance” although dependent on the basic human metabolism, but is independent of the source of caloric intake (if obtained through, i.e., fats, proteins or carbohydrates). From this perspective, added sugars contained in carbonated soft drinks, cannot by themselves cause weight gain or obesity. If, therefore, we follow a daily balanced diet based on foods rich in nutrients, to meet our body’s basic needs, we can include our favorite refreshment – while always keeping our energy balance and practicing sports. Alternatively, especially if you follow a diet plan for weight loss you can choose the drink you want in its light version, which contains negligible calories!

But perhaps the light soft drinks are bad for our health?
Answer: The myths that accompany the consumption of light soft drinks are mainly attributed to the issue of aspartame, which is the main sweetener used in those containing zero or minimal calories. The truth, however, is that, especially as aspartame and other low calorie sweetener used as ingredients in Light refreshments, have been thoroughly tested and approved, through dozens of scientific research and is a characteristic that  officials responsible for the food safety agencies, such as the U.S. Food and Drug Administration (FDA) and the European Food Safety Authority (EFSA) stress that all low calorie sweeteners are safe and that there is no issue as to their impact on human health. Besides, this is also common sense: a substance that circulates for at least 20 years, in 6,000 products and has been researched more than any other, cannot but be unsafe! Additionally, like other low-calorie sweeteners, it is the ideal solution for those who suffer from diabetes and cannot consume sugar. Also on June 30th, 2012 the Cypriot Ministry of Health, made an official announcement to confirm that Cypriots consume safe levels of aspartame from foods and beverages.

Soft drinks cause cellulite?
Answer: there is no scientific link with the consumption of carbonated beverages and the creation of cellulite. Cellulite is a skin condition which is mainly due to hormonal disorders, and disorders in the interior of fat cells. In terms of food, according to studies, it is something which contributes mostly to the accumulation of fat cells and thus creates the typical “appearance of orange peel” skin, this is the overconsumption of fatty foods.

It is true that soft drinks dehydrate the body?
Answer: This is an old misconception! The “misunderstanding” is due to the connection made with the diuretic effect of caffeinated beverages with the possibility of dehydration. Water is the first choice for hydration, but all liquids, juices, milk, tea, coffee, soft drinks and many foods, fruits and vegetables, yogurt, soup, etc., contribute and help meet the needs of our liquids!

Does the caffeine contained in beverages, cause addiction?
Answer: The addictive effects of caffeine have often been contradictory. However, according to the World Health Organization, caffeine is not addictive and undoubtedly the lack of it does not compare to the social and psychological symptoms caused by alcohol, drugs or smoking. As regards to the issue of caffeine, a key ingredient in coffee and tea- and an added  ingredient in colas- things are simple: when consumed in moderation, it acts as a mild stimulant of the central nervous system, which however has transient effect, does not accumulate in the body and is eliminated within a few hours after consumption. That is why according to the World Health Organization, there is no evidence to suggest that moderate consumption of caffeine can negatively affect the body or cause addiction. This applies the same both to coffee, and, of course soft drinks contain three times less caffeine per serving! Again, we will refer to the golden rule of moderation since, to touch the safety limits for the daily caffeine intake by adults (400 mg) we should consume within a day over …. 10 packs of caffeinated beverage!

Share:
15% off any pre-ordered product at Qboo plus 1.95 for coffee and bagel
Caprice at Londa