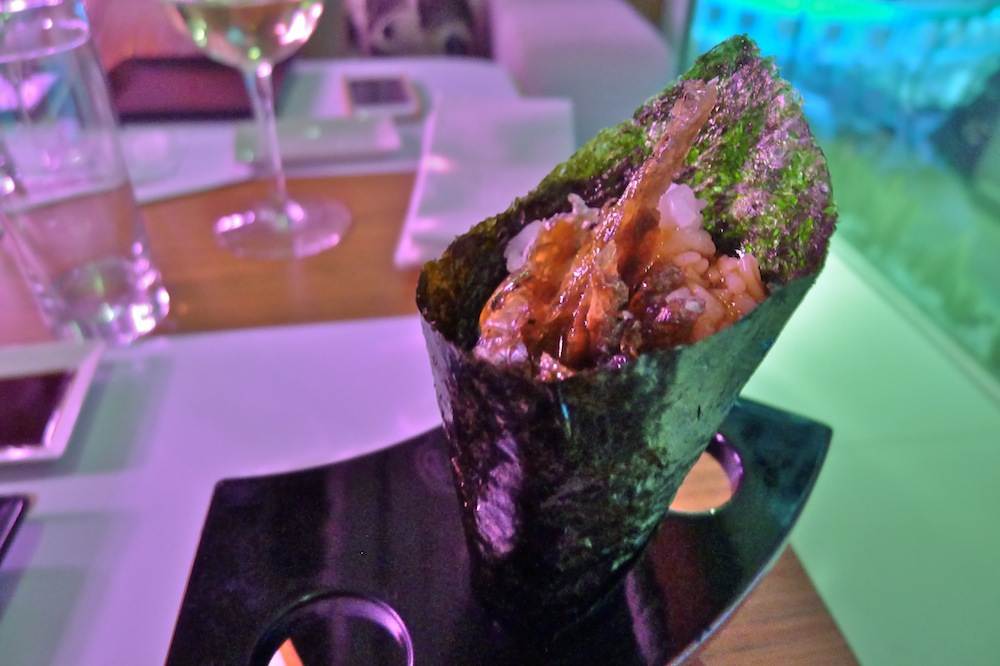 Georgiou A 90, 70005868, LEMESOS (LIMASSOL)
Mon-Sun 20:00-2:00
Food: [rating:4] 4/5
Service: [rating:3.5] 3.5/5
Ambiance: [rating:3.5] 3.5/5
When I first heard that the all time famous, Nippon from Larnaca would come to Limassol excitement and relief were the first two feelings I felt. Excitement because I have always been a big fan of Nippon, even though rumours were going around that it isn’t as good as it used to be. Relief because a Japanese restaurant with food that can be comp ared to international standards has finally landed a quick drive from where I live. Fortunately after my visit my opinion hasn’t changed, but rather reinforced as the only thing I didn’t used to like about Nippon (which was the price), has been improved!
The fact that it is located inside Breeze Club (on the top floor) is a win-win situation for both Breeze and Nippon. Firstly Breeze uses efficiently a space that wasn’t always full and Nippon has found a hub that is already established rather than taking a risk on space and location. The allocation of tables and the bar fits a Japanese restaurant perfectly as there are tables outside for those who like to spot Limassol traffic, high tables as soon as one enters for the ones that want to keep it casual, a large round bar appropriate for dining and drinks and comfortable sofas at the end with a first class view of the entire club. I didn’t like the purple LED light that is seriously overdone, and I didn’t get the point of the drawings of what looked more like a Middle Eastern girl rather than something of a Japanese origin. Otherwise it is a buzzing place with a diversified crowd of youngsters and an above 30s group with beautiful chill out music at low levels appropriate for dining that goes up in volume after midnight.
There are a few additions and modifications to the menu of the original Larnaca branch with some of the classic dishes still there. It is of good size without being too long, unlike its peers in both Limassol and Nicosia. Apart from a long list of maki (sushi rolls) and temaki (hand rolls) there is also a page of “Salads, a page of “Appetizers”, one page of “Specials” and a four dishes of the “Imperial collection” including the black cod and the lobster salad.
We, unfortunately, didn’t have the capacity to try the entire menu but from the selection we made I can confidently recommend the Okinawa salad which was perfectly sour with small pieces of sashimi, the Sumo maki. The thinly cut tuna tataki that I almost always order was also tasty with a light and refreshing lemony sauce while the hot crab mini spring rolls were like mini bites of heaven. The spicy salmon maki that we tried was equally good and even though the roll itself looked like a simple salmon roll it was served with a dressing which was quite spicy (as it should be). My salmon skin temaki which I haven’t had in a long time (and that I had to choose out of a surprisingly long list of temaki) was excellent with a perfectly crispy yet light in taste salmon skin. The soft shell crab appetizer, although usually crunchy and lemony this time was rather sweet. I wouldn’t say it was bad, but I do prefer the lemony one. Finally the black cod was pleasantly tasty without being extremely exceptional. One of those dishes that I would order again if I felt like it but would not be in the “must-have” like the top 3 dishes I mentioned above. It is only fair to say that, when I asked for recommendations from the specials all I got was “we have some nooddles, and also the black cod”. Not what I expected from a high calibre restaurant…
The big surprise of the evening for me was the bill. To put anyone who reads this in context, at Zen Room which is in my eyes of a lower standard that Nippon the average price with wine does not go below 60€ per person, while at Roku, the other Limassol peer, with a similar quantity the price doesn’t fall below 50€. Our bill, with wine, came to be at 40€ per person, significantly lower than what I remember paying at Nippon that was close to 70€ per person. Even mr Proud Cypriot, the most difficult to satisfy customer was pleasantly surprised. Will we return? Yes yes yes!