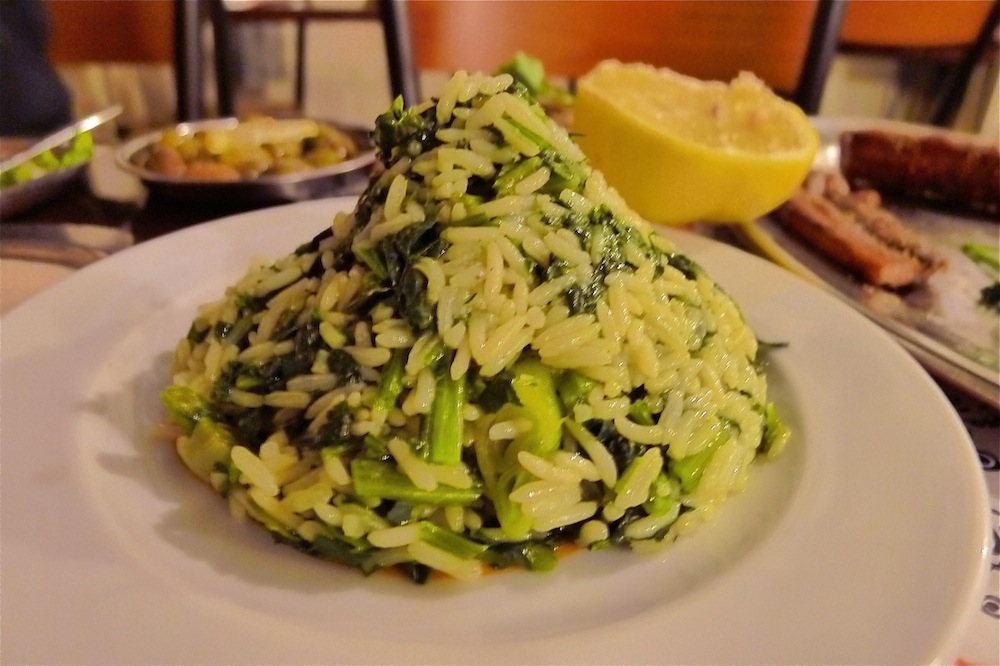 Trikouppi 65, 22765501, LEFKOSIA (NICOSIA)
Mon-Sun 18:00-24:00
Food: [rating:3.5] 3.5/5
Service: [rating:4] 4/5
Ambiance: [rating:3] 3/5
The fact that it    ’s open since 1938 surely says a few things about the restaurant: consistency, tradition and passion for what they do. Even though the owner today has bought it off the nephew of the father Zannettos in 1997, he has managed to bring (and establish) this traditional taverna into the new era. For any tourist or local that is looking for the definition of a traditional taverna they should go to Zannettos.
I am not talking about tradition as it was 50 years ago which is what you could perhaps find in a small village, but tradition as I remember it to be since I was a child. The restaurant itself is quite small, despite being double its original 1938 size. Tables are quite close together without that being a bad thing as it gives the whole place a more buzzy ambiance that reminds me of an Italian trattoria. The pictures with Panayiotis, the owner, and famous people on the walls, as well as retro posters from old cultural events might be tacky but makes it more old school in my opinion, something which goes well with the vibe of the restaurant. Even though the insides space could be considered more cosy and best during winter, the terrace at the back is fantastic for a summer dinner.
What you get food-wise is standard: full on “meze”. It starts off with a fresh Cypriot salad, very good home made “tahini”, a garlic dip that didn’t have the honour of being e aten, chopped beetroot, something that the proud Cypriot friends loved but not me due to a traumatic childhood experience, and a fantastic mini green salad with dill, lemon and soft cheese that the proud Cypriot friend devoured. This was just the beginning of the first course! The crispy fried strips of zucchini with a bit of lemon and salt was the perfect nibble, which arrived soon after. I thought this dish was a good modification to the standard zucchini with eggs. Also, when we asked if they would serve chicken kebab we didn’t expect to get a double sized portion of chicken souvlaki just to keep us satisfied! The crispy hand-cut fries with extra salt and oregano that accompanied it were indeed fantastic.
The pork kebab, a dish that I usually leave behind as I think of it of being plain and tasteless, was especially tasty in my opinion as the pieces of meat were tender and savoury and the traditional “sieftalia” (minced meat with spices) were equally good. Right after the bulgur wheat with tomato was served (“pourgouri”) which I must admit was very tasty, we started getting full. Additonal dishes which I had not expected to get were a pot of snails, which my proud Cypriot friend loved, rice with spinach, a personal favourite even though I had already eaten too much hence couldn’t really enjoy, a small dish of traditional ravioli with “halloumi” cheese, a dish which I admit I didn’t want to try at first as I thought that nothing can compare to those of Aigeo, but they were surprisingly tasty
The only dishes that I didn’t like was the platter that came with the starters and contained Cypriot sausage which wasn’t that bad but it wasn’t sizzling hot and “halloumi” cheese.that wasn’t hot and melting but rather a bit hard. I was also not pleased with the eggs with tomato, probably because they came at the end and the taste of egg was the last thing I wanted.
What I was referring to when I said “tradition as I remember it since I was a child” is the fact that, you go to a taverna, you get a thousand dishes, you barely eat half or two thirds of it if you are lucky, and the restaurant owner is happy because you actually ate a lot and there is something left which meant that the quantity served is appropriate. What is true about all types of “meze” at Cypriot tavernas is that, if there is nothin g left in terms of food the “meze” dishes were clearly too few.
As if we didn’t have enough food after the meze, as soon as our plates were taken away a portion of traditional Cypriot sweets were served (fruit in sugar syrup), a tasty Lebanese “mahalepi” for each of us and a shot of “koumandaria” (sweet Cypriot wine that is rumoured to be the first wine ever created by humans).
Zannettos’s “meze” was at 21€ each excluding drinks. Some might say that it is more than the 17-19€ in other tavernas, but I say rightly so since the dishes that came were significantly more. The truth is I was taken by surprise by Zannettos because, just when I thought its time had passed I was proved wrong by the very kind and pleasant Mr Panayiotis.