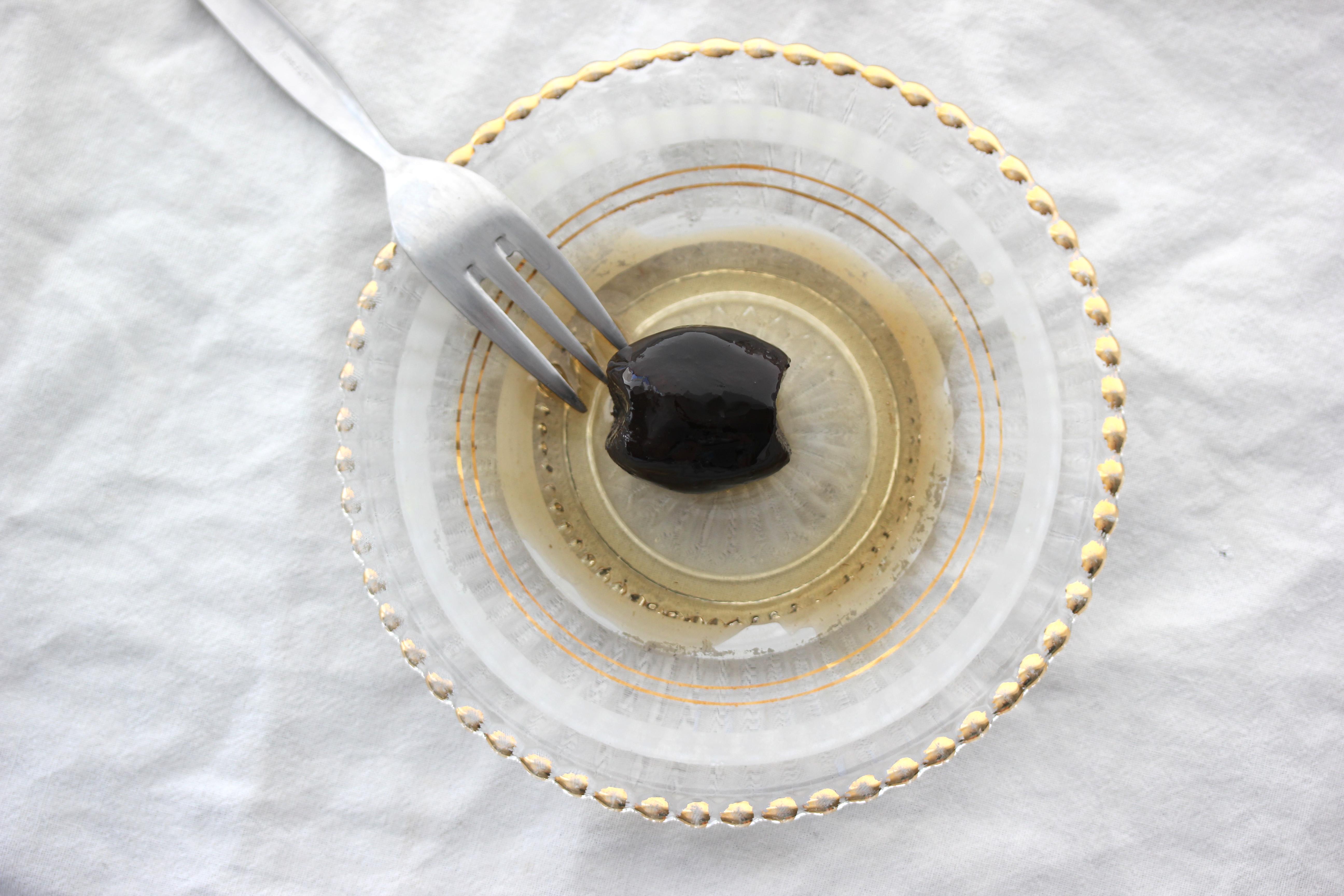 I have developed a new-found respect for people who make “karidaki glyko”. I really thought it would only take a few days at most. Cue my aunt laughing at me. Nope. It took 11 whole days and I stained my hands brown from the iodine (yes, yes, I know, woe to me.) Still worth making it? Totally. Why? For one, this is so classically Cypriot. It screams yiayia’s cooking and cyprus village coffee-time. You can basically smell your grandma’s house when you open the jar. Second, you make it and you can keep it for up to a year so that you always have something to give to those unexpected (or not) guests that come over. And despite the time it takes to make it, it actually is pretty easy. The recipes for “karidaki glyko” don’t seem to vary much. I tried three different recipes: one using agave syrup (a natural sugar substitute) instead of normal sugar to see if I could produce a healthier version; the second using cloves and cinnamon and boiling it about 15 times;  and the third using just cloves and boiling it about 6 times.  If you are looking for a healthier sugar substitute, then I can confirm that it is possible to make “karidaki glyko” with agave syrup.  It still tastes good but obviously it’s different (duh).  The second recipe using cinnamon was tastier for me, but that’s really down to whether you like cinnamon or not.  If you are making “glyko” for the first time I think it is easiest to reduce the number of times you have to bring the walnuts to a boil to avoid caramalising the sugar. So the recipe below is a mixture of the 2nd and 3rd – the easiest recipe with the most flavour.

Level of Difficulty: 4/5 (simply because of the time)
Preparation Time:  10 days
Cooking Time: varies between stages as detailed below
Makes about 50 “karithaki glyko”

50 fresh walnuts (I picked my walnuts in Cyprus the first week of June and they were already on the large size. I would recommend the end of May. You know they are OK to use because when you cut little triangles out from the top and bottom of the nut, you should be able to remove any shell that has started to form. If you cannot remove all of the shell that has started to form by cutting two triangles out, then it may be that your walnuts are too big to make “glyko”)
2 kg of sugar (I used agave syrup for one recipe I tried. Strictly speaking for each cup of white sugar substituted you should use 2/3 of a cup of agave and reduce other liquids by 1/4 to 1/3 cup. But here, I just did a straight substitute using the same quantities and no other adjustments and it was fine.)
1 cup lime powder (Otherwise known as pickling powder, which contains calcium. When making walnut “glyko” (and some other types as well) lime powder (calcium hydroxide) is used to give the walnuts a bit of a crunch – i.e. preserve their hardness and prevent them from going soft.  Saaay whaattt’s in my food. Turns out you have to be really careful with this stuff, when not rinsed away properly it has been known to cause botulism. (!!) It goes without saying that you should buy this as pickling lime from a grocery store – NOT anywhere else (like a lumber yard) as you might find other bad additives in the powder. (um, duh?) Are there substitutes for lime powder? Turns out not from what I can see. The reason for using lime powder is to keep the walnuts hard and prevent them from softening. Apparently adding grape leaves help in this respect, but it is unclear how many grape leaves you would need, for how long you would need to soak them together with the walnuts or what the affect (if any) on the taste would be. Basically, it’s as clear to me as mud at the moment. But, perhaps this is a future recipe experiment. Can anyone reading shed any light on this?)
about 5-6 lemons
1 cinnamon stick
1 tbs whole cloves
5 cups water 1. Peel the walnuts. Wear gloves when doing this as your hands will otherwise turn brown from the iodine naturally present in the walnuts.

2. Cut the tips off the walnuts using a triangle shape, as shown in the picture. 3. Pierce each walnut with a skewer (I used a knitting needle) vertically.

4. Put the walnuts in a bowl covered with water. Leave for one week (e.g. sat to sat) and change the water daily.

5. On the 7th day, change the water and put 1 cup of lime (about 225 grams) in the water with the walnuts. Let rest for 4 hours. Then wash the walnuts at least 3 times and very thoroughly to rinse the lime out and then place in a large pot of water.

. Add the juice of 4 lemons and as much water as needed to cover the walnuts. Leave for an hour. The lemon juice helps the walnuts to become shiny and crispy.

8. Empty the water. In a clean saucepan add the sugar and about 4-5 cups of water. Heat the mixture on the stove until the sugar melts. Add the walnuts to the mixture and on medium heat allow the mixture to cook and foam for about 7 minutes. Let cool on the stove and cover with a lid.

9. For the next 3 days, bring the mixture to a boil for about ten minutes each time. On the 3rd day (ie the fourth time boiling the mixture), add the cloves and cinnamon, boil and let the mixture reach setting point – i.e. when the sugar syrup slowly drops off a spoon. Also test to make sure that the walnuts are cooked. To do this, get a needle and pierce a walnut horizontally. Point the needle towards the ground and let the walnut try to slide off – if it does slide off, the walnut is cooked. Add juice of a 1/2 lemon towards the end. Note that if you boil the mixture too much, the sugar syrup will being to caramelize and you will need to add a little more water to make it more like syrup.

10. Let the mixture cool completely and then place the walnuts with syrup in clean and dry glass jars. A good tip to make sure your glass jars are clean and dry is to put them in an oven with the door open at the lowest temperature for about fifteen minutes.