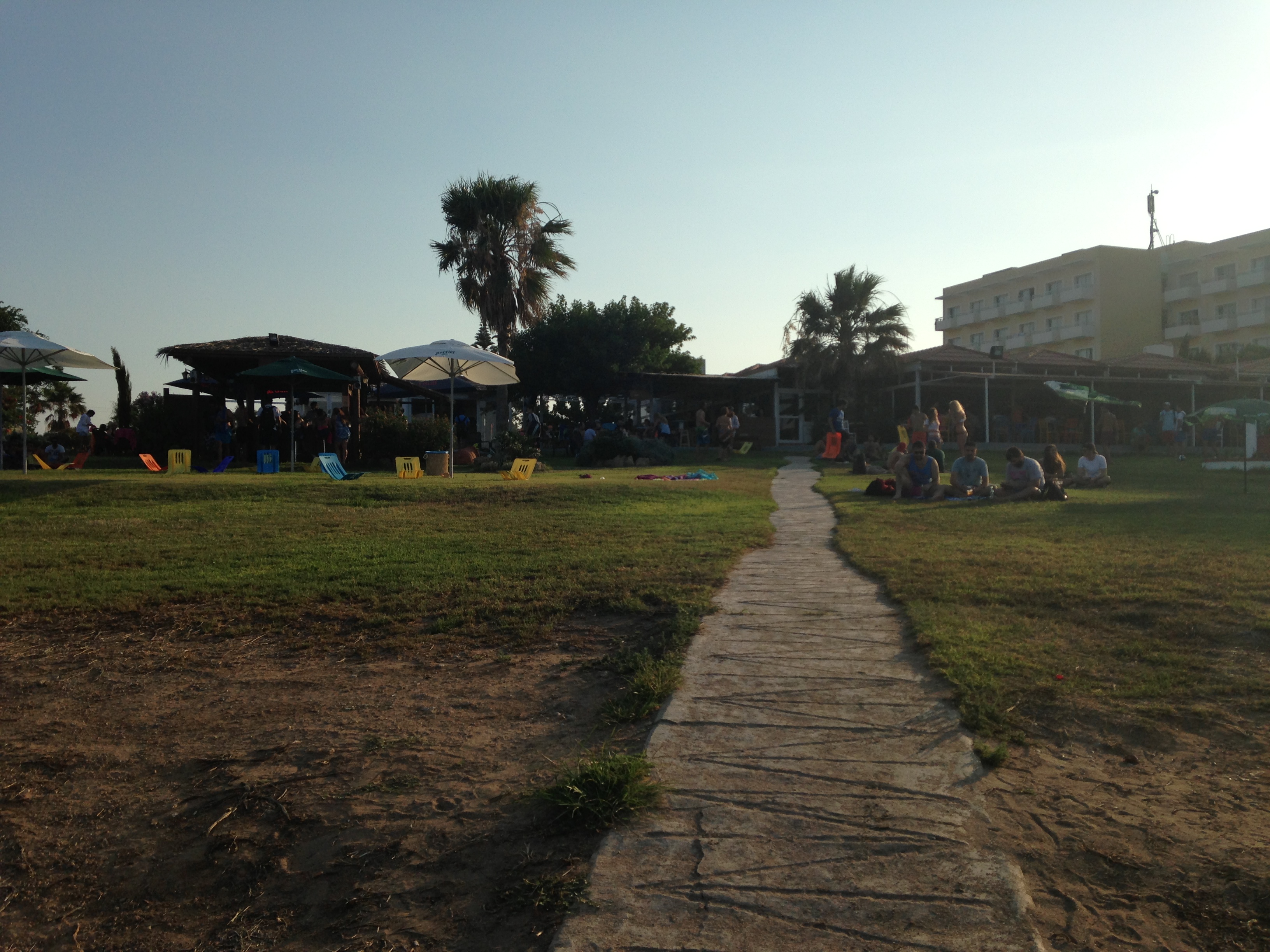 Amfitritis 9, (Protaras beach front), Protaras, AMMOCHOSTOS (FAMAGUSTA)
Mon-Sun 9:00-2:00
Food: [rating:2.5] 2.5/5
Service: [rating:3] 3/5
Ambiance: [rating:3.5] 3.5/5
Scarabeo we know, and Scarabeo we like. Not only the venue, but the concept, the people and the vibe. This is why we didn’t take long to visit the new Scarabeo by the beach in Protaras in a fantastic location on a small bay that looks more like a lagoon than the Mediterranean beach. It is obvious that work still needs to be done in the main space that used to be a taverna, (not that it really matters since the lawn in the front is so big that the inside space is of little use). Having said that, there are a few things that I personally did not like. One was the concept of the Scarabeo currency which I thought wa s not only inconvenient, but just not worth the trouble.
There is no doubt in my mind that the main highlight is the location. As soon as I walked in the first thing I thought was, what a waste it was for the taverna that was there before, having such a space and not taking advantage of it. The main restaurant space comes first, and it is simple open-plan restaurant, nothing to write home about. Further towards the beach there is a massive area with a well kept lawn where one can relax, either on the low beach chairs under the umbrellas that are available for guests or on the standard tables. Around 70 meters further down there’s a small bay that looks like a lagoon. The green plantation on the rocks around it makes the place feel exotic and serene. The area at the top by Scarabeo is not as crowded as I have expected making it possible to relax and enjoy the day there. This is not something I can say about the area by beach which is really narrow and quite crowded with less than a dozen sunbeds making it difficult and uncomfortable to spend the day there.
Now what is there to eat and drink at Scarabeo? The main question is not what, but how you buy it. Scarabeo have created their own currency (God knows why) which you have to “buy” from the entrance. What seems to be a good thing is t hat you with 10€ you buy 13€ Scarabeo currency. What I didn’t like is that, firstly I simply wanted a Perrier which cost 4€. That meant I had to go up to the shop and change a 10€, and then as I was leaving change my Scara-currency change back into euros. I of course said that I will keep it for another day, which led to me losing it and hence paying 10€ for a Perrier. Secondly, although one gets 3€ extra looked good at first, the uplift was reflected in the price of the drinks as a Cappuccino Freddo served in a plastic cup costs 4.5€. The same goes for a 6€ roast and halloumi sandwich served cold in white baquette. My point? You get a mini present of 3€ that is cancelled out by the higher prices. I did, however like the fried calamari and would be happy to order it again instead of the sandwich.
My main verdict is: fantastic space but the Scarabeo-currency-concept is to say the least annoying. The whole venue compensates for everything else, but it would make it so much easier to spend the day there if there were good toasted sandwiches and pittas which are very easy and cheap to make. Giving the option to people to pay cash instead of with Scarabeo currency and not getting the extra 3€ could also be an option.