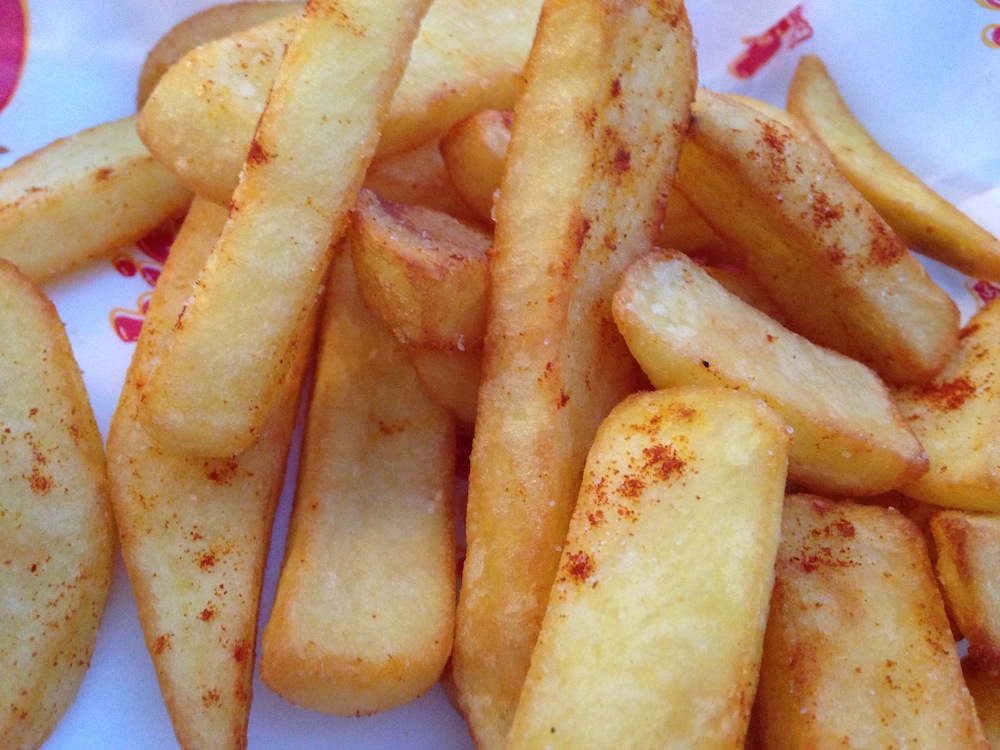 almost next to each other. People are talking about how they love late night hot-dogs and how it is their new “favourite” snack. An American diner with a similar vibe but larger has also opened its doors a few meters up the road. The truth is, I love hot dogs and burgers but hate the fact that we are trend followers rather than trend setters.
What I found out later is that Bich stands for burgers, ice cream, crepes and hot dogs, a combination for which I have not yet formed a clear opinion on. I get the American diner concept with burgers and shakes, but adding the crepes was a bit of a risk. I went there for an early pre-theatre dinner, thinking that this would give me enough time to digest a burger, (burger and fries is not a meal I often have in the evening). There are two kinds of burgers on offer here, the “everyday bich” one at 150g with coleslaw and caramelised onions which costs 5€ without fries, and the “huge bich” with extra salsa and chips. Two numbers were what immediately blocked me from ordering the “huge bich”: one was the “500g” size, and the second one was the 18€ price. I don’t really know how much a 500g burger should cost but 18€ sure seemed like a lot.
My standard burger with extra chips was actually quite ok and 150g of burger contributed to a fairly large burger. The patty itself was thick with a mildly spicy flavour of herbs which balanced out the beef. I also thought that the sesame was a plus as I am a big sesame fan. I removed the coleslaw and the caramelised onions and added the standard ketchup, that together with the tomatoes and lettuce made the burger moister. The fries that came with paprika were probably frozen but what do you expect for 1.20€. I didn’t think they were a highlight but I ate them anyway.
I took the liberty of ordering a hot-dog for Mr Proud Cypriot. When I was asked if I wanted all the extras (ex coleslaw) I surely didn’t expect to get the 14€ Bichwurst sausage. It was actually tasty in a “junk-food” kind of way, and it was sized as a proper meal but definitely not worth 14€, even if it was 40cm. The biggest issue I had with this is that anything less than the 14€ wouldn’t be enough for a normal person so basically if you want to eat a hot-dog and not be hungry afterwards you would need to pay 14€ (without fries!).
What I should have mentioned earlier is that it is mostly a take-away/delivery place with only four high benches outside. It is more appropriate for a quick meal rather than a sit-down dinner.
Looking back I would return for a burger, and wouldn’t hesitate to try the crepes and/or waffles. If I really craved a hot-dog I would have their 14€ hot-dog again but I wouldn’t be very happy paying for it.