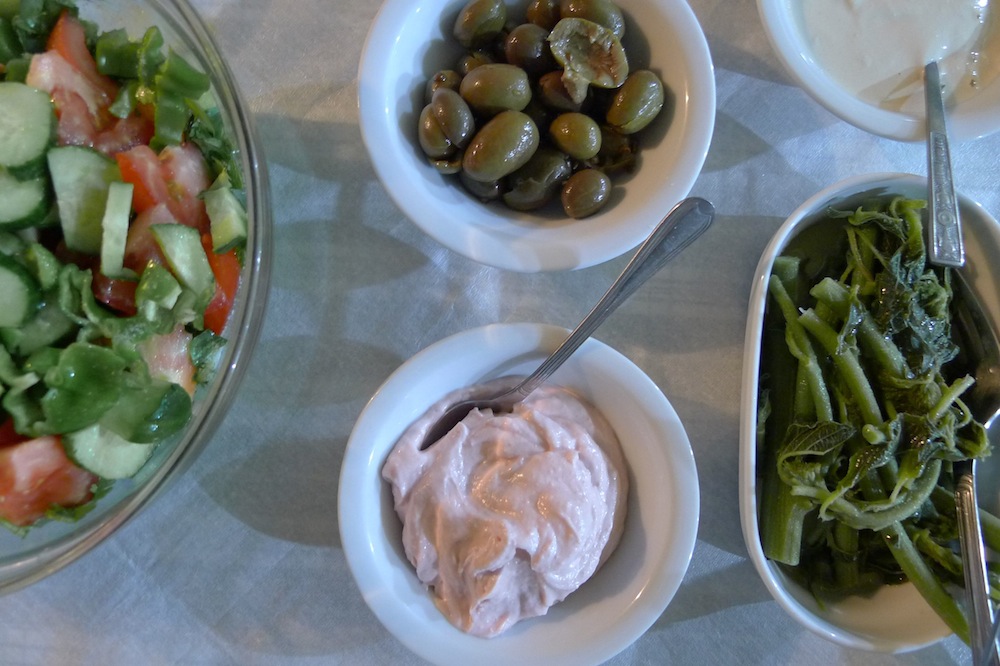 d it is not central (unless you live in Strovolos). It has a pretty garden surrounded by trees which at this time of year is a major plus as its inside space is a bit “wintery”. Eating fish “al fresco” in a casual ambiance is definitely one of the best ways to spend these summer nights.
What I also liked about “Psarolimano Filippos” is that it is operated by two people, (apart from the chef): Mr Kleanthis (the son of Filippos, so don’t go calling him Mr Filippos as I did) and his very friendly nephew. That means the personal touch is present, together with excellent hospitality.
The highlight however, is neither the good service nor the pretty garden, but the food. I always say that I am looking for a traditional tavern that will offer a twist in a local way, a tavern that, together with th e traditionl “meze” will prepare something different than will distinguish it from other taverns of its type. This is exactly what “Filippos” did. Despite being traditional he makes a selection of home-made starters that make him differ. Apart from the fresh salad and dips, the “gigantes” (beans) were a good addition and so were the freshly fried, crispy zucchini chips and the steamed greens. However, the highlight of the starters apart from the home made sesami “koulouri” (traditionl bread), was the “xilagouro”, apparently a cross between cucumber and melon which I had never tried before and which tasted like aromatic cucumber. It was very was refreshing and flavoursome. The large red and rich in flavour tomatoes that came with it were equally good, and reminded us how a salad in Cyprus should taste like. We were a bit disappointed that they didn’t have the famous tomato starter, but Mr Kleanthis said that unfortunately the type of tomatoes required for that dish only come out after October.
Apart from the variety of starters we had the scorpion fish, also known as “skorpina” in Greek, a fish that I had never been offered in Cyprus before. I had actually never had it, but the proud Cypriot friend who was pleasantly surprised said she only had it in Greece and that it was tasty. Fortunately, it didn’t let us down, and together with a portion of tender grilled octopus was more than enough for two people .
The highlight was the bill. Together with a small bottle of wine and water that were kindly offered on the house the bill came to 20€ each. The truth is that in terms of fish we only had the scoprion fish at around 350-450g, the grilled octopus and a large selection of dips and nibbles but that never stopped us before from paying 30€+ each. The verdict is that we will return as soon as possible!

Tags: restaurant, €€€
Share:
Yiagkini by night
Agro-time at 25€ for food and accommodation at Pelendri village