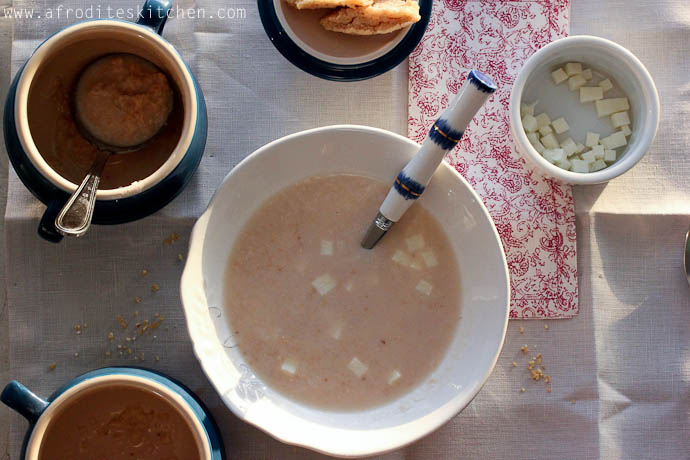 Until now, I thought making “trahana” would be very hard and not worth my time. But, in fact, it basically consists of leaving milk out to turn sour, and then boiling it with crushed wheat and leaving that outside in the sunshine to dry out. In other words: it’s do-it-yourself easy.  “Trahana” is literally crushed wheat mixed with soured milk. Traditionally, it is shaped into small triangle pieces and left to dry in the sun. collage1The dried small triangle pieces are boiled in chicken broth and enjoyed as soup. When you boil the “trahana” it forms a creamy like and salty porridge. In Cyprus, pieces of halloumi are traditionally added to the soup, but you can enjoy it different ways. You can add lemon to the broth, or – my favourite – grated tomato. My aunt’s neighbour makes it from home and sells it, and she taught me the necessary. collage2 “Trahana” is traditionally made with fermented unpasteurised goat and/or sheep milk. Traditionally, and we are talking very traditionally, “trahana” was made with earthenware pitchers in which the milk would sour over a period of many days. When the soured milk was boiled it was stirred with large wooden spoons that had sprigs of thyme and fennel attached. I didn’t make my “trahana” with added thyme or fennel, but I regularly add these ingredients to my chicken stock anyway, so there are always hints of these flavours in the soup (when I make it with chicken stock, I make it with stock cubes too). Nowadays, the process of making “trahana” has become more commercial. For one, a lot of pre-packaged “trahana” is made with milk and water, thus diluting the “soured milk” flavour. Secondly, “trahana” is sometimes dried in the freezer not left in the sun to naturally dry. You can, of course, still find people who make “trahana” in a more traditionally way. Note that the flavour of the “trahana ” will depend on various factors, including the type of milk used, how long the milk is left to sour, and how much salt (or extra flavours) are added when making the “trahana”. There is no right or wrong in this regard, as it is simply a question of taste. One thing I noted was that to make “trahana” you need to use unpasteurised sheep and/or goat milk. If you don’t have any available, then you can use sheep and/or goat yogurt, but you need to make sure you buy traditional sheep or goat yogurt – one with live cultures in it. You can not use pasteurised milk to make “trahana”. Also you need to ensure that if you buy sheep/goat yogurt, it is good quality yogurt, i.e. made with all milk and not diluted with chemicals or water. So, next time you have some soured good quality sheep or goat yogurt with live cultures at home, don’t throw it away. Have some cracked wheat ready, and make “trahana”

Level of Difficulty:3/5
Preparation Time: about 44 hours (plus ample time for drying in the sun if you wish, see recipe below)
Cooking Time: about 45 minutes on the stove
Makes about 250g-300g of “trahana” pieces 1. Sort through the cracked wheat and remove any red or dark pieces of wheat. (See picture collage.)

2. Let the yogurt sit outside (not in the sun) for 24 hours until it goes sour. When it goes sour, it will look clumpy. I left my yogurt out of the fridge in the shade at about 25C for 24 hours.

3. Pour the soured yogurt in a saucepan on the stove. Add 1 tbs of salt (more or less to taste, I like mine salty). Bring the yogurt to a slow boil, constantly stirring to dissolve the large clumps of soured yogurt and to ensure the mixture does not stick to the pan. Once the mixture has boiled, turn down the heat to let it simmer and continue to stir for about 30 minutes, until the large clumps have mostly dissolved.

4. Add the crushed wheat. Continue to stir the mixture for about 10 to 15 more minutes on low heat. You will notice the mixture becomes thicker as the wheat begins to absorb the soured yogurt. Take off heat and let cool. Once cool (1 to 2 hours) cover the top of the saucepan with a towel and let it rest for 18 hours. 5. The mixture should now be slightly hard on top. Knead the mixture with your hands. If the mixture is very dry, coat your hands in a little milk (not soured and pasteurised is OK). Form triangular pieces (as shown in the photos    ), or long and skinny rolls, and place on baking paper and leave in the sun to completely dry for approximately 8-10 days. Store in a glass container in a dry place. (Note you do not have to wait for the “trahana” to dry to eat it. You can make soup with it as soon as you have made the triangular pieces.) 6. To enjoy one portion, place about 40 grams in 2.5 cups of boiling chicken stock and/or water. Simmer for about 30 minutes, until desired level of thickness. The more you cook it, the smoother the soup is because the “pieces of “trahana” break apart. If you would like to add a little more flavour to your “trahana”, add fennel and thyme when you make your chicken stock. You can also add pieces of halloumi or grated tomato to your “trahana” as it is cooking.