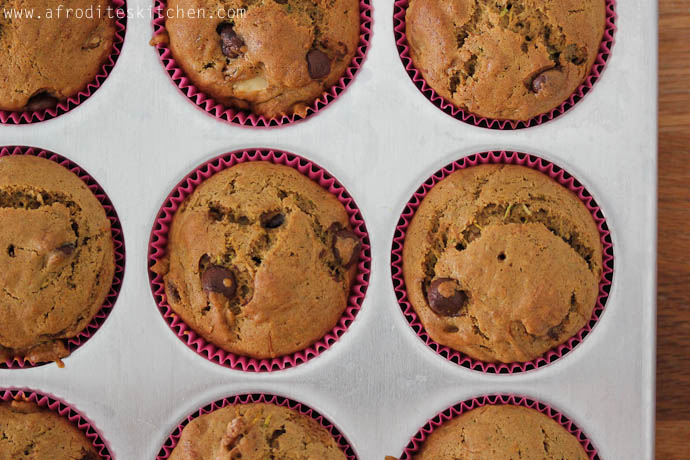 In Cyprus, there is A LOT of zucchini. It is in season during the summer. In fact, it is October and zucchini is still in season. It is natural that towards the end of zucchini season ones’ enthusiasm for cooking with it begins to shrink. A lot. To the size of an atomic particle. So I decided to do something about my dwindling enthusiasm. In Cyprus, I haven’t noticed that people making zucchini bread. I wasn’t sure if it was because the variety of Cyprus zucchini might not lend itself to making bread. Or that people don’t like it. Or that maybe it’s just not something that was traditionally made here. But I thought I’d try. So I made zucchini spice muffins. And they were fantastic.The muffin is moist, and you get a lovely warm taste that reminds you it is autumn – a combination of the nutmeg, cinnamon and cardamom. I made these muffins with coconut oil, which I am cooking a lot with these days. Not only is coconut oil fantastic for you, but it gives your baking an added level of flavour which, in the right recipe, can compliment what you are making (or it can turn out really gross). This is one of those occasions where it tastes really good. You can find coconut oil at your local organic store in Cyprus. It’s not yet readily available in the larger supermarkets, from what I have seen.  The muffins are not difficult to make. You may need to watch them a little bit in the oven – test them with a toothpick at the end to make sure they are cooked. Otherwise, it’s pretty much mixing the ingredients and pouring them in. So, I hope you enjoy this zucchini recipe. I, for one, don’t mind now if zucchini seasons lasts just a little longer. (OK, maybe just a little longer so we can make more muffins, but then that’s about it for this year.) 1. Preheat the oven to 175C and line a muffin tray with muffin cups.

2. In a large bowl, whisk the eggs, oil, sugar, vanilla until well combined. Stir in the grated zucchini.

3. Mix in the cinnamon, nutmeg, cardamon, baking powder, baking soda and salt. Fold in the flour to form a smooth batter. 4. Stir in the orange zest, walnuts and chocolate chips.

5. Bake for between 20 to 28 minutes. Keep an eye on the muffins after twenty minutes so they do not start to burn. Pierce the center of the muffin with a toothpick to see if it comes out clean, if so, then the muffins are ready. all posts by date  recipes
1112
0
Although I love making new recipes and I am obsessed with cook books, I always find myself often going back to those recipes who are easy to make and delicious like pasta Bolognese, home-made...
Read more

foodie news & other announcements
1733
0
Probably the best thing I have done this month is have aperitivo by the sea at Ventuno Aperitivo, and I mean a PROPER Italian-style aperitivo: pay for drinks and get a buffet of delicious...
Read more