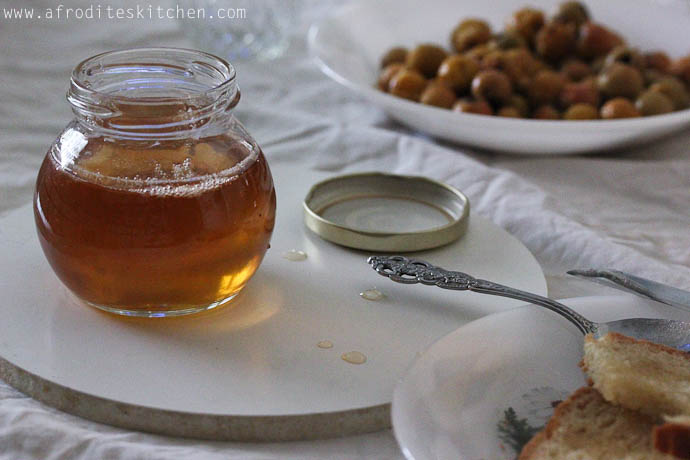 This week I was introduced to “mosphila” (azarole) jam. I am glad I was introduced. In fact, I was surprised that we hadn’t met before. Something so good shouldn’t be kept secret…or perhaps it should. This jam reminded me of a cross between rose flowers and apple-pear. It’s the kind of jam that one could imagine enjoying at an afternoon tea, but also in your kitchen on a piece of toast in the morning while searching for the “on” button on the coffee maker. I tried it while the jam was still hot and before it had set and was met with a proper scolding from my aunt, but I couldn’t resist. I think “mosphila” jelly is quite popular in Cyprus. I came to hear about it because every time I told someone I was learning how to make very traditional Cypriot recipes, they usually asked me if I knew how to make “mosphila” jelly. Until now, I would always say “no, not yet”. My words were always met with deflated shoulders and a resounding look of disappointment. But, yesterday I learned how to make it. And like with all jams, it is pretty straight forward. Technically what we made is “mosphila” jelly – this is what is made with the liquid that the “mosphila” are boiled in on the stove. This jelly was traditionally was offered at engagement parties, weddings and christenings. You can also take the leftover “mosphila” fruit and mash these into a jam, which is another recipe in and of itself and something I plan to write up later. The jelly is the easier of the two to make (because the “mosphila” have lots of pips inside so it is time consuming to clean these before making the jam). For now, enjoy this traditional recipe for “mosphila” jelly! 1. In a large saucepan over the stove, bring to a boil and simmer the azaroles and water.

2. Once the azaroles have become soft (about 40 minutes), remove the azaroles and put them in a bowl. (You can use the actual azaroles later to make another type of jam, but that is a different recipe.)

3. Pour the liquid remaining in the saucepan through a fine strainer (use a normal strainer with a cloth if necessary) into a bowl.

4. Pour the strained liquid back into the saucepan. You should have about 1 cup of liquid. Add 1.3 times the same amount of sugar (i.e. here, we had 1 cup of liquid, so we added 1 1/3 cup sugar). Add the pelargonium leaves. Put on the stove and bring to a boil then simmer, stirring occasionally to ensure the sugar melts.

5. After about 10 minutes, remove the pelargonium leaves and squeeze the juice of half a lemon into the liquid. 6. Simmer until setting point is reached. For this amount of liquid, it took about 15 minutes from when the sugar was added for setting point to be reached. You can tell that the setting point has been reached because the liquid will begin to froth at the top and from the way the liquid slowly drops off the stirring spoon, as in the picture above. 7. Remove from heat and leave for 1 to 2 minutes to cool. Pour into sterilized jam jars. Leave to cool and cover with lid.