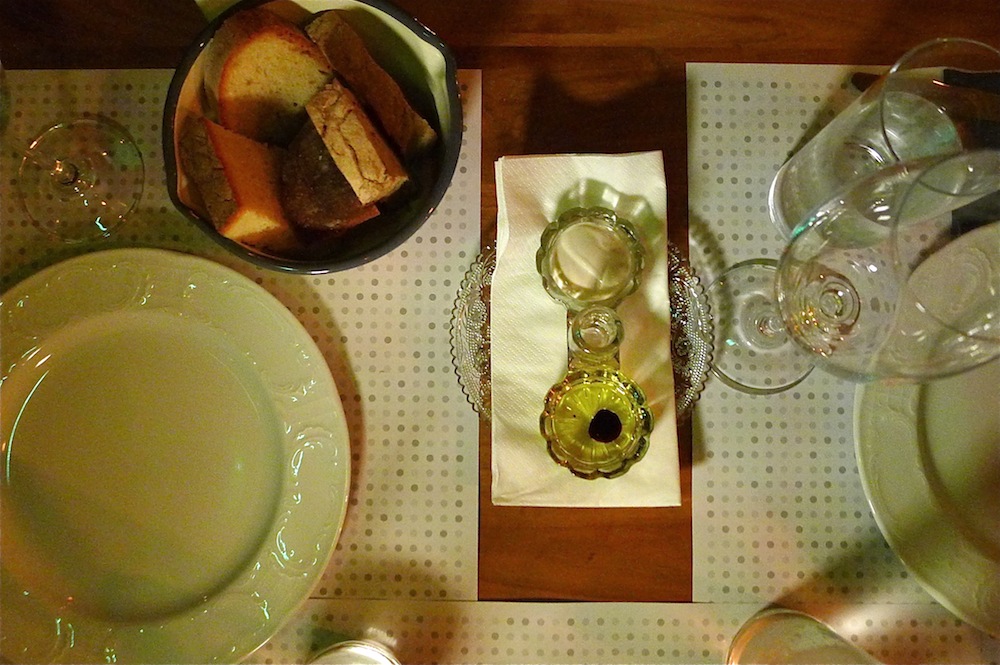 hough it is usually risky visiting a restaurant at launch in the case of D.O.T the risk turned out well! Reason being it ticks most of the boxes: casual and cheap yet with a buzz, bar/restaurant, good food without being too experimental (not that we don’t like experiments but obviously it is not our strong point as a nation), cool and accessible location, funky decor.
Although I would usually think the rustic style was overdone, but looking closely at the antique furniture (some of which actually belonged to the owner’s grandmother) in combination with the designer chairs, old ornaments like pick up players, and generally the vintage element presented in an elegant and classy way, it became obvious that this place was different. It in fact clear that it is not a place one has decided to make as his pastime, but a something in which effort and time have been put into. I also really like the fact that there is a bar on which I can see myself having a catch up with a friend over some drinks and nibbles.
Food? First impression positive as the menu is on a single page. Diversification? Having an international menu makes it easy to satisfy different preferences, especially when it includes a Cypriot and Greek element making it “easier” for us locals. The fact that we wanted more than a main course each was a sign that it is at first sight, attractive. Highlight? The burger (also the best seller). If you like your burger plain with a stronger taste of meat and no herbs, served with just the bun perhaps it is not for you. I like it “aromatic” with a full flavour of spice  s and meat, so this was definitely for me! Apart from the meat being ground to a medium level, I liked the fact that it was extra thick, served with lettuce and tomato in a proper brioche. I would have preferred plain triple fried home-made fries, but the proud Cypriot friends thought the country fries were a good addition. There is a choice of sauces and burger combos, we had the one with cheddar cheese. The black tagliatelle with prawns were also quite flavoursome without being overpowering, while the pork fillets with “koumandaria” sauce and mashed potatoes was more tasty than I expected. The meat was soft and the sauce complimented the dish nicely. Next time I would also like to try the risotto with mushrooms and truffle oil and the risotto with mascarpone and prosciuto. I thought the main courses were better than the starters, as our Moroccan salad, despite being made fresh ingredients was missing a kick in terms of taste. The “fava” (lentil mash), apparently a love or hate dish could have been a bit more flavoursome had it been served with fresh onions instead of cooked onions, which I think would have made for a stronger flavour. It was only after my meal that I was told the highlight of the starters on offer are the baby potatoes with zu cchini, the bulgur balls and the goat’s cheese with spinach, which are definitely going on my “to try” list!
Another highlight apart from the burger were, in my opinion, the desserts. Where I least expected it, the cheesecake with honey (a cake I usually look down at), was indeed excellent being thin and not too heavy, while the “dahtila” (fried crunchy pastry with a filling) with a fig paste filling were delicious and a must-try, a great modification of a rather traditional sweet. Last but not least the chocolate lovers should definitely have the chocolate fondant, a guilty pleasure served in a rather large portion with both ice cream and fresh cream! Say bye bye to that diet!
Paying 25€ per person (group of 3), for all of the above with a bottle of Greek white wine was indeed, not to shabby! The average price for starters and is 7€ while for main courses it is 11€ so definitely scoring high on the value for money scale, especially in such a pleasant, cool yet relaxed environment. Return? Yes!

D.O.T will also be serving weekend brunch from the end of November