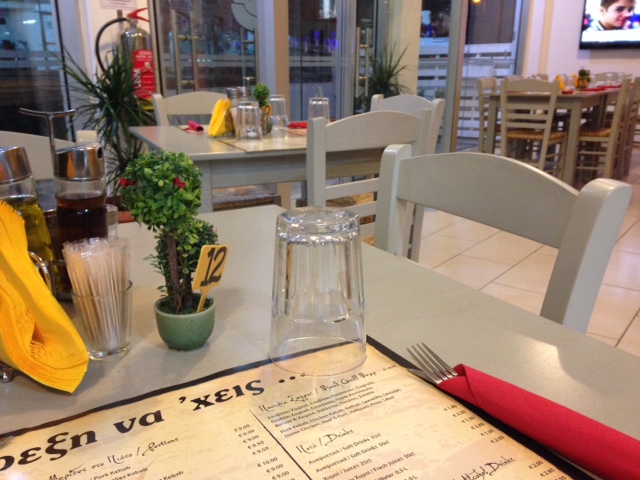 Grigori Afxentiou & Eptanisou Halcoutsa, 25728001, LEMESOS (LIMASSOL)
Mon-Sun 19:00-23:00
Food: [rating:3] 3/5
Service: [rating:4] 4/5
Ambiance: [rating:2.5] 2.5/5
This recent casual tavern opening in Limassol clearly represents the elements that make this type of place successful nowadays (even though not in my personal opinion): first comes variety, then comes food and finally location. You can probably guess the rest of the review. The menu was quite rich with local dishes, the food was okay and the location was easily-accessible but not so central. Yet, Orexi Na’His seems to be quite popular amongst Limassolians.
Let’s take things in turns. The restaurant itself is in a renovated space that used to be a shop. It’s bright which makes it casual and quite buzzy since the food is being prepared in an open-plan bar. The fact that it has tables outside and inside makes it convenient for smokers as well as a good option for the summer. It is also worth mentioning that, even though the decor is simple, and says nothing in terms of design, I thought it was very clean and proper.
The menu contains mostly Cypriot traditional dishes with a Middle Eastern touch including all the usual suspects: gyros, kebab, Cypriot sausage, halloumi and mushrooms served in either, pita bread or as a portion in a plate. Meat on the grill, dips and salads as well as a few fish and veggie options were also available. The Greek salad Mr Proud Cypriot and I ordered to start off, together with the “tahini” dip were quite tasty and so were the grilled mushrooms with parsley. For main course we ordered a main portion for each. Even though we thought it would be a lot we didn’t expect such sizeable portions! Mr Proud Cypriot’s chicken tandoori included three large sticks of big cubes of chicken with a mountain of fries and a side salad. It is only fair to say that the chicken was tender but the tandoori flavour could have been stronger. My pork “gyros” was of a similar size. I thought the pork itself was flavoursome but a bit too fatty leaving a strong after-taste. What I didn’t like was the fact that the fries were not fresh and probably frozen. The portions cost 10€ and 9€ prices, a price that is, I guess, justified given the large size.
Looking back I would say the dishes in pita bread were of higher value for money (between 4€-8.50€ depending on the size) unless one orders a pork chop or lamb chops. Furthermore the fact that it has a delivery and take-away service, it is easily accessible (as you don’t have to drive in the old city to get to it) and the fact that it has a few more dishes than just pork and chicken kebab justify its recent popularity. The friendly staff was also a big plus.
Even though I understand why it is so busy I must adming I am an “old-school-taverna” girl that prefers to eat in a what-might-look-like-a-decadent place to most people, yet with an evident local vibe and tradition.

Uncategorized
556
0
Halloween is way over but pumpkin season is not! I never used to like pumpkin, mainly because I hated “kolokotes” (Cypriot pumpkin pastries), but then after randomly having pumpkin bread, pumpkin pies, pumpkin ravioli...
Read more

all posts by date  recipes
763
0
Although I love making new recipes and I am obsessed with cook books, I always find myself often going back to those recipes who are easy to make and delicious like pasta Bolognese, home-made...
Read more

all posts by date  recipes
865
0
I don’t know about you but for me there are some dishes which are staple meals for my family like Cypriot style fish in the oven, veggie or beef fajitas and of course, spaghetti...
Read more

foodie news & other announcements
1187
0
Probably the best thing I have done this month is have aperitivo by the sea at Ventuno Aperitivo, and I mean a PROPER Italian-style aperitivo: pay for drinks and get a buffet of delicious...
Read more

foodie news & other announcements
761
0
NOA, the beach front seafood restaurant has hosted a lovely evening of Fish vs Meat tasting menu paired with alcohol (cocktails, beer and wine) which was indeed delicious with dishes from raw tuna carpaccio...
Read more