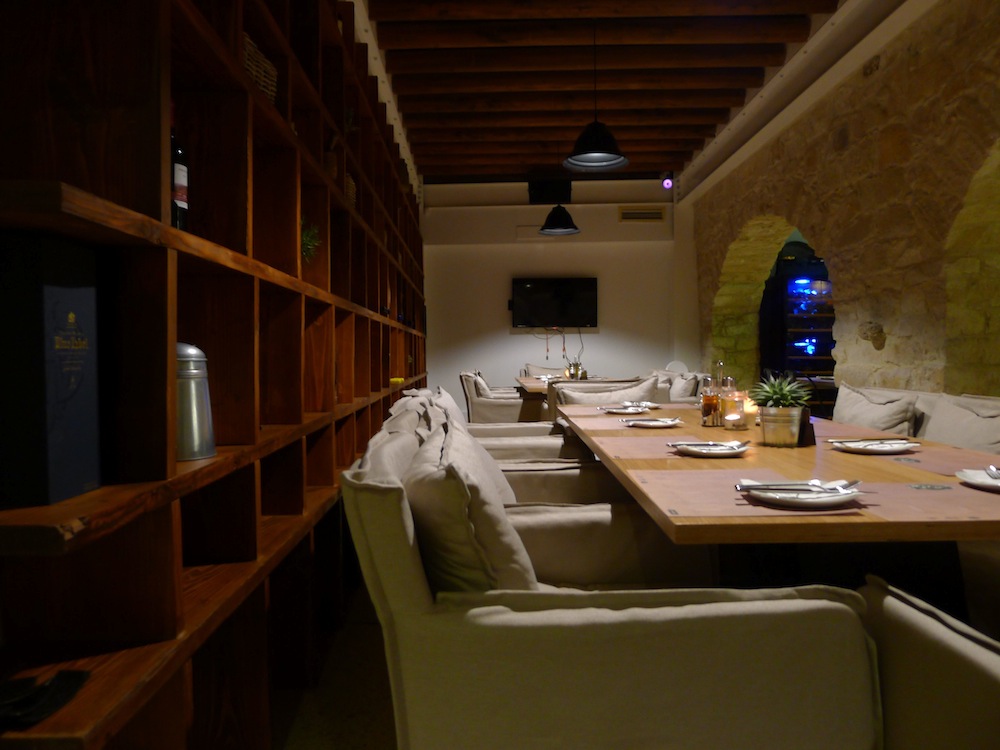 “To Hani” is one of those new restaurants into which effort was put into its creation. Why I liked it is simple: ambiance. It is right in the castle area, and even though it is full size is not immediately obvious when you are walking by, it is in fact quite big.

Right at the entrance there is a very spacious courtyard with high and low tables in the colour black, as well as a “lounge” area at the entrance. At the back there is a very small and cosy inside space, through old traditional stone arches, which the owners kept from before the renovation. I actually thought the inside space was much more special with a long bar on the right, as well as low and comfortable table chairs. The massive bookcase makes the already warm space even cosier as it creates a winter-y atmosphere. The black colour, the old stone arches and the wood effect could remind an old wine cellar.
What I didn’t like was the type of food. In fact I would really like to ask the owners, why, in such a pretty restaurant with such potential, would put a predictable, international food menu that I have seen more than 20 times, in a restaurant with such potential? After I saw the name “To Hani” (“Το Χάνι”) which I had seen before in Greece, I actually thought it would have a Greek cuisine, something that would be, in my opinion more suitable…perhaps a Greek creative, or even Greek traditional cuisine, instead of steaks, pork chops, fajitas, burgers and pasta. Please note that the food as such was not bad, what bothered me was their choice of menu.

Mr Proud Cypriot’s fillet steak was tender and flavoursome, even though the boiled vegetables were the frozen type. The rib eye steak was also up to standards while the seabass with rice was not bad, although not so memorable. My chicken fajitas were good presentation-wise as they came in a three-story plate tower, and the sizzling chicken was tasty but I would have preferred the guacamole to be less creamy.

The falafel dish we had as a starter was excellent as they came freshly fried and perfectly crispy on the outside. The Caprese salad with mozzarella, tomato and basil was also up to standard although it was a simpler dish. The fact that it has a lot of platters to share was a positive element. The service was very friendly, yet slow (and made a mistake on each dish), but I don’t want to delve too much on it as I want to be lenient during the first month of opening.

In a nutshell, if you are looking for something different in terms of buzz and good but predictable menu you should visit it. 35€ per person (4 people) with a bottle of Vlassides red, 2 starters and four main courses was alright I thought. My final verdict is that, despite a few things with which I disagree, I would return as it is a really pretty, pleasant and different. Overall, it is worth a visit.