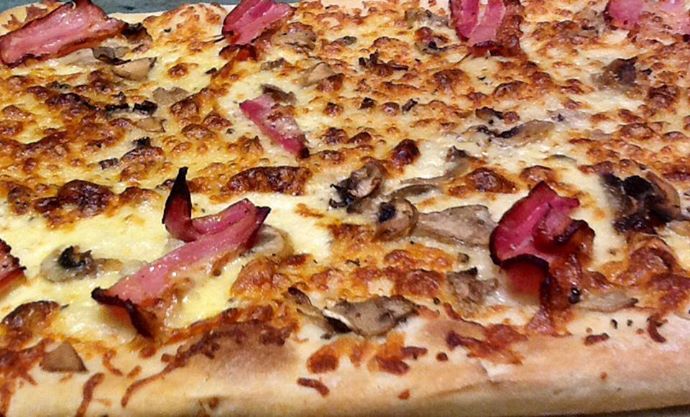 Kanari & Kitiou Kyprianou, 25347080, LEMESOS (LIMASSOL)
Mon-Thu 12:00-3:00, Fri-Sat 12:00-6:00, Sunday 15:00-3:00
Food [rating:2.5] 2.5/5
Service [rating:3.5] 3.5/5
Ambiance [rating:3] 3/5
The second pizza place I visited in a period of two weeks (the first one was Tomato, Pizza & Pasta), both less than 500 meters apart. Is that a new trend I see or what? Both serve a similar purpose –that is both these restaurants offer value-for-money pizza all day long. The only material difference is that Per Metro offers only pizza and 3 mini salads, and even though it has a few tables it looks more like a take-away place. The best thing about it is definitely the fact that it is open after hours!
When passing by I thought it looked pretty cool, being bright and stylish with nice colours and retro features. I did immediately think that the Italian element is less obvious (apart from the fact that they serve pizza) since in Italian the pizza served “per metro” is actually called “al metro”. Nevertheless, as a huge pizza fan I had to try it.
What I noticed is that, despite being in the very centre of the Cyprus universit y buildings (right behind Saripolou square), as the rest of the restaurants in the area, it doesn’t attract a lot of people for a sit-down lunch but mostly for take-away. The fact that the pizza oven together with a pizza window with a few pre-cooked pizzas are right in the centre of the restaurant is, I thought, quite nice. The very friendly waiter and pizza cook immediately explained to us that we can have pizza by the piece from the ones in the window, or alternatively he could prepare one for us but we had to have a whole one in that case. The truth is one pizza is enough for one person, but nevertheless we decided to have three pieces of three different pizzas to try them out. The “peinirli” (something between a pizza and a calzone), also looked good so we got one of those too.
The pizza itself, with an extra thin crust was OK, neither great nor bad. I thought that the crust was way too thin and would have benefited from a bit more cheese on it. It is however, very hard to complain when each piece is 2eur-3.50eur euros. I wasn’t sure if the price for a whole pizza (9.90eur-15.80eur) is for a whole meter, or if it is the square pizza made of the 4 pieces which is available at that price. In the case of the latter, 15.80 is too much. I preferred the mozzarella and pesto one which a had more cheese and a light taste of pesto. The one with chicken and barbecue was good, but as I am not a fan of barbecue sauce I wouldn’t order it again. The “margarita” one was a bit boring but tasty. The “peinirli” with mushrooms was the best, especially for the ones who like more “bready” flavours. I forgot to mention that we also ordered a green salad with balsamic vinegar and prosciutto which was very fresh, but was served in a plastic box. While we are at it, the cutlery was also plastic
15euros for 2 people with a bottle of water and a coke was not a lot, and despite the fact that the pizza was not the best I have ever had, value for money was good. In reality though, we paid the same price as Tomato Pizza & Pasta round the corner where we had a large pizza, a large chicken Cesar salad and a large plate of chicken pasta which we enjoyed as a proper sit-down meal.

Students can get a 20% discount.