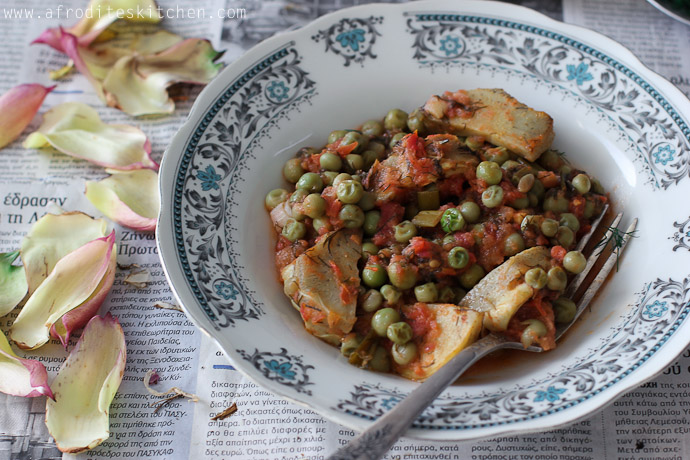 Seriously, is it May already? It’s almost summer and I have decided to try and get in shape. Not just for summer. But kinda for summer. But part of that is me just trying to eat a bit healthier. Now that artichokes are in season in the village we have been chopping them every time we visit. So it’s been pretty easy to eat healthy at the moment. Though, artichokes aren’t my favourite thing to clean. I love eating artichokes, but peeling fresh artichokes is super. mongo. gross. They are filled with ear wigs, green bugs and weird goo. But I’ve done it twice now, just because yummy taste outweighs the yucky goo stuff. This dish is a traditional Cypriot dish, which is often made in the spring. It’s fresh peas, artichokes and dill. In Cyprus, what is really interesting is that people love meat, but the traditional village diets did not include much meat. Just on very special occasions such as Easter and Christmas. When people became more affluent and moved to the cities, there was a tendency to look “down” on this mostly-vegetarian diet, and meat sort of became a “now-have-must-have” habit. The tendency to include meat in dishes is very strong in Cyprus – so much so my friends who are vegetarians are still met with befuddled looks. Which I find quite ironic, since diets mostly consisted of vegetables and such to begin with! This is a fantastic dish. It’s easy to make (except for peeling the artichokes which I find quite gross, but it’s easy and worth the effort), and stews on the stove so gives you plenty of time to do things (like write this post), and makes for even better leftovers. And it’s healthy. For those trying to get back in shape. Or not. Enjoy! 2. Add the grated tomatoes and sugar. Lower the heat slightly, stir and cover and leave for about 10 minutes, occasionally stirring.

3. Add the artichokes, peas, water, salt and pepper. Bring to a boil. Then immediately cover the pot with a lid, turn the heat down and let simmer for 30 minutes on the stove. Stir occasionally.

4. After 30 minutes, turn off the heat and add lemon juice. Do not stir, just shake the pan to distribute. Cover, and let sit for about ten minutes before serving.