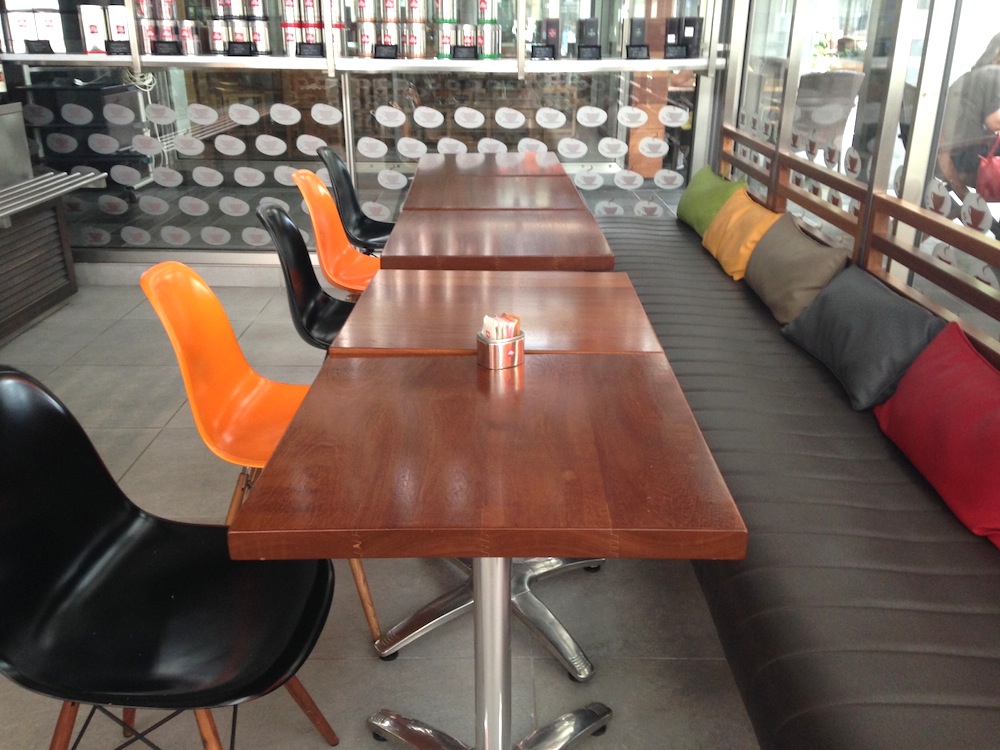 Agiou Andreou 223, 25278000, LEMESOS (LIMASSOL)
Mon-Sun 8:00-23:30
Although it has been open for a few years now I keep forgetting all about this café. In fact I think it gets “lost” in Columbia plaza and its true self is not easily identified. After two and a half years in Limassol I have finally managed to visit it for a quick bite and I can confidently describe it as quite simple café which offers good quality with a special, modern ambiance.
The inside space is small and stylish. We expected nothing less from Vakis architects of course. I liked the metal effect combined with colourful touches, it gives the place a sort of high tech feel. Despite its pretty décor I noticed that most people sit outside in the courtyard between Columbia Steak House, La Boca and Plaza Café. It is a stylish and relaxed outside space but does remind me of the dining area of a Mall. As you can imagine I thought the inside of the café was much more special.
Food-wise there isn’t much choice but dessert-wise there is plenty. There is a small list of sandwiches on offer, including a Tartufo which I had and in fact thought that it was really tasty. My choice of wholegrain bread with prosciutto, Edam tomatoes and tartufo oil sandwich,which was served toasted and was very tasty. My friends salmon and cream cheese in ciabatta was equally good. We could tell that both sandwiches had been prepared on the spot which we appreciated very much. The price of 6euros for each was on the high side, especially since overall we paid  10euros each for a sandwich and a small juice.
Dessert-wise one can find anything from cookies, to apple tarts and cup cakes- a rather inviting selection. I imagine the menu was carefully chosen to avoid taking away customers from La Boca but to complement the restaurants already present in Columbia Plaza.
So overall I would highly recommend it for a coffee and cake, especially after a fantastic pizza or salad from La Boca next door!

all posts by date  recipes
1106
0
Although I love making new recipes and I am obsessed with cook books, I always find myself often going back to those recipes who are easy to make and delicious like pasta Bolognese, home-made...
Read more

all posts by date  recipes
1311
0
I don’t know about you but for me there are some dishes which are staple meals for my family like Cypriot style fish in the oven, veggie or beef fajitas and of course, spaghetti...
Read more

foodie news & other announcements
1719
0
Probably the best thing I have done this month is have aperitivo by the sea at Ventuno Aperitivo, and I mean a PROPER Italian-style aperitivo: pay for drinks and get a buffet of delicious...
Read more

foodie news & other announcements
1064
0
NOA, the beach front seafood restaurant has hosted a lovely evening of Fish vs Meat tasting menu paired with alcohol (cocktails, beer and wine) which was indeed delicious with dishes from raw tuna carpaccio...
Read more