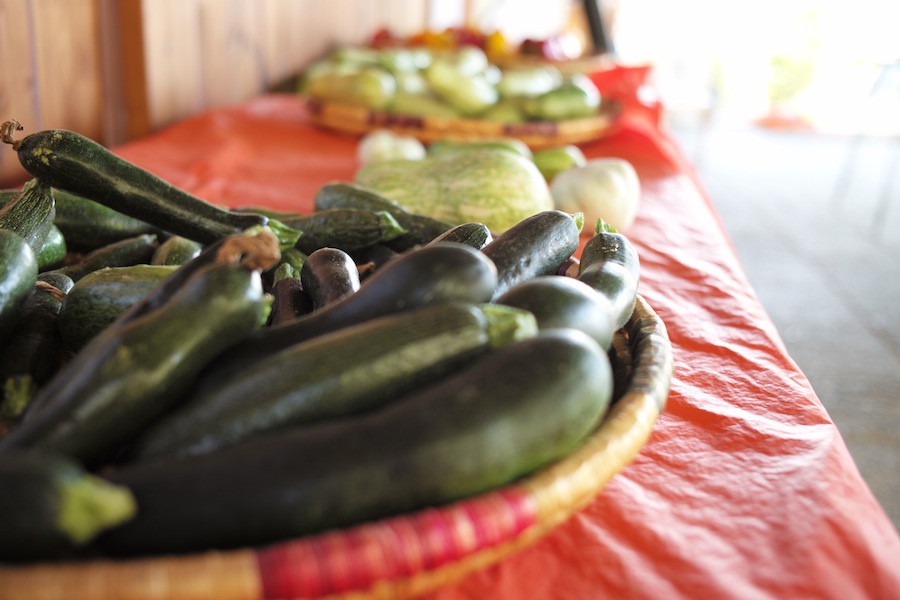 If I had to list the top 5 discoveries of the year this would be one of them. It’s like these people heard me complain and provided exactly what I was looking for. In fact, they provided us with what a lot of people need nowadays: an organic vegetable market (with some extras) with products full of flavour, free of any pesticide or genetically modified organisms. What’s more is that everything is being sold at the point of production from the producers themselves. How good is this?
When My proud Cypriot friend, fellow blogger and recipe writer Afrodite’s Kitchen, said she heard about this market, although I did get excited I had some doubts, especially when she mentioned it was at this woman’s house. When she said one of the best chefs in a big hotel in Limassol shops from her I felt a bit better but I wasn’t convinced. It was only when I arrived there and saw what was happening that I changed my mind. Firstly there were quite a few cars parked outside, meaning that quite a few people actually did shop from this place. Secondly seeing the vegetable fields across the house, i.e. the source of what I was about to buy made all the difference. It is one thing buying tomatoes from an organic food store and being told that they are grown somewhere organically, and another thing watching the farmer cutting the tomatoes and being able to take them home a minute after.
Hearing the story of Mr and Mrs Hadjipieri and how they started it, it all made sense. Their organic farming goes way back form the time they were at university in Greece in the early 1980’s when they used the university’s land to grow organic vegetables and sell them to make their living. In fact, Mr Pieris was one of the first people to grow organic products in Greece and the first one in Cyprus in 1986 when he returned from his studies. What changed, however, is that back then, investing in organic farming brought no income since people didn’t know what organic was. After failing to make a substantial profit out of it the Hadjipieris family decided to continue with their agricultural activities only to keep them self sufficient but did not pursue it professionally. They went on with their day jobs as a civil engineer and a Math teacher. More than 25 years later, however, everyone at last got fed up with having to compromise with eating cucumbers full of water and flavourless tomatoes, people became more interested in knowing what is in the food they eat, and unsurprisingly organic farming is at an early boom. I am not going to spend a lot of time on how fantastic the red, ripe, flavorful and fresh tomatoes were but will only say that when Mr Proud Cypriot tasted them he forbade me to buy tomatoes from anywhere else ever again. The small oval tomatoes, the pomidori from a Sicilian seed, the “sweet aperitif” tomatoes and the small cherry tomatoes are a sample of what you can get at Hadjipieri’s market. Fresh home-grown marrow, yellow, red and green peppers, cucumbers that smelled like my childhood and fresh lettuce are what you can get this season.
The cherry on the cake was that they also make home-made feta and goat’s cheese from their own goat and sheep (which of course, they feed with organic grass). Furthermore, if you go on their Saturday market you can also try Ms Chrystalla’s pies which she makes from her own organic eggs and home-made cheese. This is only the beginning since their product selection is growing all the time. What you should know is that they only grow what is in season and they sell them every Saturday morning at the point of production, their home in Ayia Fyla. Apart from vegetables and cheese, they sell home-made organic jam, rabbits from their farm ready to cook and organic eggs. Needless to say that they don’t even have a proper street across their house to avoid car fumes from going near their products.

The Hadjipieris family sell their products in bulk as well. If you need to buy fresh and tasty products for your restaurant, hotel or another purpose contact them on 99332581

all posts by date  recipes
1090
0
I don’t know about you but for me there are some dishes which are staple meals for my family like Cypriot style fish in the oven, veggie or beef fajitas and of course, spaghetti...
Read more