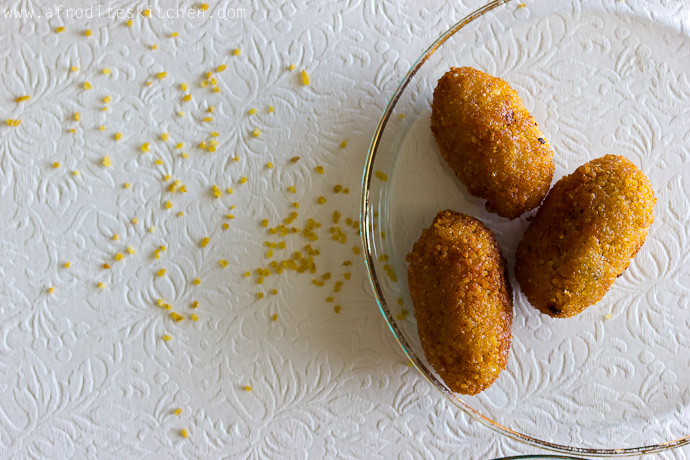 Yesterday my mom and I decided to make a Cypriot traditional recipe called “koupes” which are sort of like a meaty-falafel. I have to say that I have been dreading making “koupes” and saved it as a recipe “I would make with mom” because every time I told someone I was going to make “koupes” they would tell me “it is really, really hard“. So I kind of became scared of making “koupes”. Which is a bit silly to be scared of meat-filled bulgur wheat. In reality what I discovered is that it is time consuming and a bit finicky but not hard or impossible in any way. What I noticed is that – in contrast to the store bought “koupes” – these ones had a much crispier outside texture – almost crunchy. The center is the same: savoury meat filling spiced with cinnamon and cumin. We almost didn’t add the cumin, but it really is what made these “koupes” stand out in my opinion. In addition, I was trying to figure out why “koupes” bought from a store have a smoother texture on the outside, but my only conclusion was that they must use less bulgur wheat and more flour which probably also saves on money or they pulse the bulgur wheat mixture in a food processor to make it smooth (a technique I might try the next time with some of the bulgur wheat mixture). When you cook the “koupes” they actually continue to taste good the next day – just store them in a bowl with plastic wrap on top. The outside is a little less “crunchy” the next day, but I liked that. It was as though you were eating a different – but just as tasty – type of snack. I might not make these all the time simply because of the time they take, but I definitely will be making them again. They are tasty and differ to the store-bought “koupes” – the homemade “koupes” taste a bit healthier too. Some tips I noticed: you really need to make sure the texture of the bulgur wheat is correct – if it is too dry, then it won’t enclose the meat properly as it won’t be sticky enough. But if you add too much water, then you will have difficulty frying them and the taste will get diluted. So add a little bit of water slowly until you start to see the consistency showed in the pictures in the “recipe” part below. Make sure you use “fine” bulgur wheat. Also, we experimented with a lot of different techniques to make the “koupes”. There is no “right” or “wrong” way. If you find a technique that works for you, just use that. I preferred to shape my “koupes” into oval-like spheres (see the not-so-pretty-plate-picture in the “recipe” section below) instead of longer pointy-tube shapes and in the end, the chubbier oval-like spheres worked much better in the oil as they did not crack. Another trick is to add a drop of water to your hands before picking up a walnut sized amount of the bulgur mix to shape it. This will make the bulgur wheat easier to work with. Finally, I was thinking about whether or not to use chick-pea flour instead of regular flour to make the “koupes”. I think it would add an interesting flavour and I might just do that next time in case you want to try it out! Enjoy! I am still in ice-cream mode, so will probably get back to regular posting come September! Happy Summer Days, Ice Cream Breaks and “Koupes” cooking! xxx

Level of Difficulty: 5/5
Preparation Time: 3 – 4 hours
Cooking Time: each “koupe” is fried for  5 minutes (until golden brown)
Makes about 27 “koupes”

for the filling (I made a lot of filling. This yields about 1.5 cups of extra filling which can be enjoyed on its own.)
500g lean ground pork
3 tbs olive oil for frying
1 finely chopped large onion
1/2 cup finely chopped parsley
2 tbs finely chopped fresh mint
3/4 tsp cinnamon
1/2 tsp cumin
1/8 tsp all spice
2 tbs pine nuts
salt & pepper to taste 2. In the meantime, prepare the filling. Heat the olive oil, add the onion and cook and stir until the onion is soft. Then add the pork, and stir fry until it is cooked and the liquid released has evaporated. Then add the parsley, mint, cumin, cinnamon, all spice and salt and pepper to taste. Then with both hands form a small little oval-sphere ball. Make sure the sphere is tightly packed otherwise the “koupe” might fall apart when you fry it. Place the “koupe” in a plate. Prepare all the “koupes” the same way. 6. Once the “koupe” is golden brown, remove it, and place it on paper towel to soak up the excess vegetable oil.