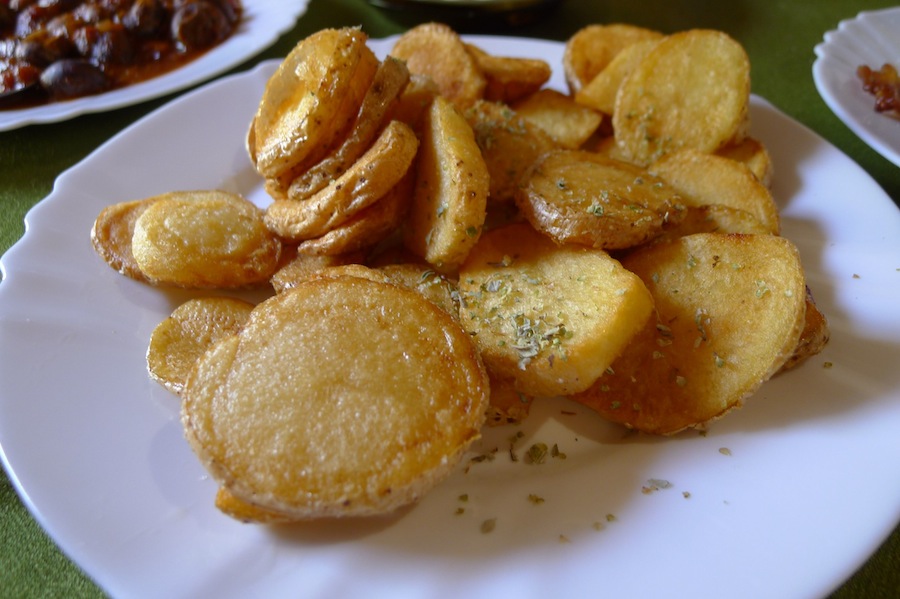 Gouri village, 99625695, Gouri, NICOSIA DISTRICT
Mon-Sat lunch and dinner
Food: [rating:4] 4/5
Service: [rating:3.5] 3.5/5
Ambiance: [rating:3] 3/5
Last winter I had visited «Mezedokamomata» at Gouri village (which I actually liked). However, the first thing I was asked by proud Cypriot friends was, why I had chosen Mezedokamomata over its well-known neighbour. Eight months later I decided to check the famous neighbouring restaurant out and despite the boiling heat at the end of August I finally saw what the big fuss was about.
It’s small, it’s traditional and it’s pretty. It’s sat on the edge of the mountain and therefore although Gouri is not really that high up, the place gives out a strong feeling of being away from the city. The restaurant’s veranda is quite small and, unfortunately for us, it fills up quite quickly whereas the inside space (where we got a seat) is bigger yet still quite cute with Cypriot ornaments decorating the walls. The menu consists of one thing: a very rich «meze» selection. What I liked about it is that the meze is traditional and contains all the usual suspects, but each dish has a touch of individuality.
The Cypriot salad with lettuce and cabbage was fresh and lemony and I could tell that the dips were home made. The grilled halloumi that came out first was served hot and it was extra soft, just the way I like it. The snails cooked in tomato sauce were quite different to the standard dish that is served with no sauce, and were full of flavour being extra salty, while the pork in wine sauce («krasata») was excellent.
The biggest highlights were the «koupepia» (vine leaves with minced meat) served with «anthous» (stuffed courgette flowers) cooked to perfection, the small, fried meatballs with a crispy crust served with bulgur wheat and the «antinahtes» potatoes, fried with coriander which were cut in long slices and had the most tasty crispy skin ever.
The fact that the restaurant offered both, tomatoes with eggs and zucchini with eggs shows just how rich the «meze» selection (restaurant usually serve one of the two). We also had some lamb «souvla» which was crunchy, juicy and full of flavour. The last dish was the steaming «pasticcio» that was served in a clay pot. As you can imagine we were so full that we had to ask for the pasticcio to be packed for us to take home (unfortunately without the clay pot).
The cherries on the cake were the crispy, fried «mpourekia» filled «anari» cheese which we devoured, as well as the bill that was less than 20€ each. «To koultouriariko» is one of those restaurants that must be added to your «regulars» list. It is close to Nicosia, hence easily accessible, the food is plentiful and all the dishes are tasty, the ambiance is easy-going and the prices are fair. Essentially, a risk free choice!