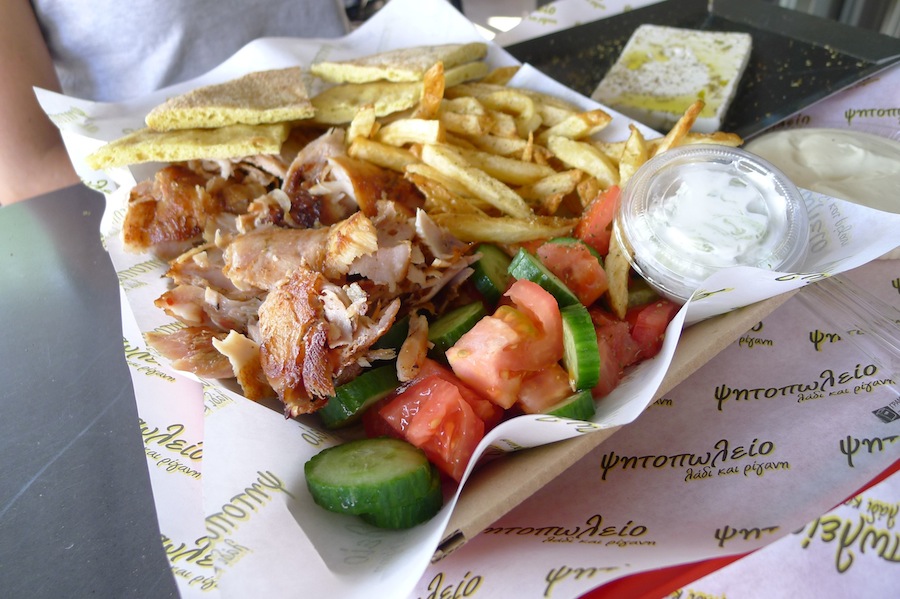 Makarios Ave 163, 77778005, LEMESOS (LIMASSOL)
Mon-sun 11:00-23:00
Food: [rating:3] 3/5
Service: [rating:2.5] 2.5/5
Ambiance: [rating:3] 3/5
If I were vindictive I would write a bad review and dismiss this place (or at least its service). If I take a step back, however, I can see that it was simply a bad day, a day on which a review was not meant to happen.
We decided to check this place out with a proud Cypriot friend for a quick lunch on a Tuesday. Greek “souvlaki” (kebab) and “gyros” are on the menu so we assumed it would be great for a casual catch up. Upon our arrival at 1:30 we were told that due to some changes in the kitchen they were not ready to start cooking, and they would only be able to take our order in 30 minutes. We said that, if it is only 30 minutes we would wait and politely asked if there is any chance it would take longer. They said no, 30 minutes is a promise. We didn’t mind the wait, but we minded that 40 minutes later no one told us that they had started taking orders. We also minded that they took orders from four different tables before taking our order (although we had arrived first), and we also minded that no-one told us we had to order at the bar. The cherry on the cake is that we were charged the two drinks we were offered on the house while we were waiting. Ignoring what I hope is an incident of bad luck, the place is actually quite ok. The place gives off a modern air with metal, retro stools and chairs, a pretty decoration with Greek touches and a rather large outside space for smokers. I also liked the open-plan kitchen where one can see the kebab and the “gyros” being prepared.
Most food offered here falls in the “Greek” category and the menu is quite simple. The “gyros” and kebab (pork, chicken or Middle Eastern) is either served as a wrap in Greek pita bread, or as a plated dish with a few sides such as fries and salad. I liked the fact that there were also a couple of appetizers on offer (although the one I really wanted to try, the grilled aubergine with feta and tomato was unavailable on the day).
The mix grill “gyros” that we ordered as a plated dish came with fries, a small salad, Greek pita bread and “tzatziki” and was truly tasty. It was my favourite dish. The meat itself was salty without too much fat and really easy to eat. The fact that the fries were not the frozen, mass-production type, was a very positive element. The pita bread was a bit different (but not in a bad way), as it had more corn than wheat flour.
The two Greek pita souvlaki wraps with “Anatoli kebab” (Middle Eastern flavours) in which we added “tzatziki”, fries, lettuce and onion were quite good with a more spicy type of meat. Instead of pork cubes the meat was shaped like a sausage with minced meat and spices. The Greek salad, (“choriatiki”), that we ordered was clearly an exaggeration as we barely touched it, and so was the feta with olive oil and oregano that we chose as an appetizer. To summarize, I liked the ambiance as I thought it was modern and fresh. I liked the food although I had a strong after-taste of Middle Eastern herbs and salt (which to be honest was due to trying the “Anatoli” Kebab). It is basically a place to go for a Greek gyros or “souvlaki”. I do think that if they did offer delivery service, it would be a popular choice.