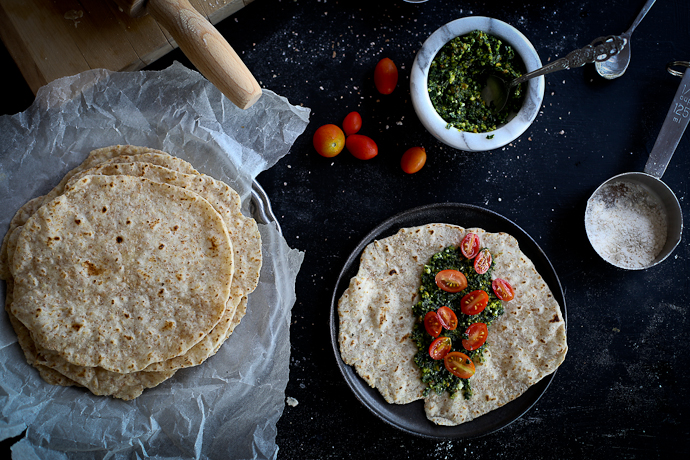 Do you prefer cooking for other people? I am not sure why, but I love making stuff when I know that other people will be eating it with me. I feel totally uninspired when I am cooking just for myself. This week my friend’s son had his birthday and I made some halloumi-mint scones (sharing these later this week). I was in a big cooking mood that day (as a result of making the scones for a group of people) so I decided to try to make tortillas for myself for lunch too, which is definitely something I wouldn’t normally do. But I did. I had seen a lot of comments about people making their own tortillas and how incredible the taste was. I definitely believed them, but I just always thought it would be a gigantic hassle to make them from scratch, and also, I just worried I would make a mess instead of something tasty. But it’s not the case!! They are EASY!!!! Seriously, you add everything in a bowl. Let it sit for 20 minutes. Roll them out and then literally fry them in a pancake-pan for about 10 seconds each. You get really good tortillas. Next time I think I will add some flavour to the tortillas too. You could easily add a little cumin, or maybe paprika for a bit of a kick. I would usually pair tortillas with cheese or chicken and salsa, but I just oped for some homemade kale pesto, chopped tomatoes and a fried egg. I liked the kale pesto, but I think it still needs a little tweaking so I won’t share it today. But the awesome tortilla recipe I will share.

(Adapted from Peter G, who adapted the recipe from Robert Rodriguez) 1. Put all of the dry ingredients in a large bowl and mix together.

2. Add the vegetable shortening and butter to the flour and mix it together with your fingers until the mixture feels like fine breadcrumbs.

3. Add the water slowly, mixing it until you have created an elastic dough. Chop the dough into about 9 golf sized pieces. 4. Cover these golf sized pieces with a towel in the bowl and let them rest for about 20 minutes.

5. Roll out each piece of dough into a thin circle. Add to an already hot frying pan on medium-high heat for about 8-10 seconds on each side. The dough will rise, puff up and create bubbles which is normal – it’s a sign to flip them over to cook the other side. 6. Place them in a basket to keep them warm.