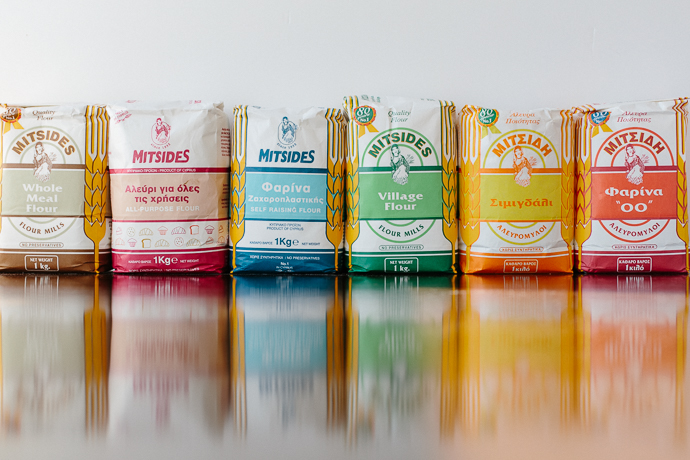 You may be wondering what flours are used to make certain traditional Cypriot foods. This guide provides a quick guide to the types of flours typically used in Cypriot cooking and what they are used to make.

The most unique flour to Cyprus, is probably “Cyprus Village Flour” also known as yellow flour. Technically, this is actually durum flour – which you may already know is what is used to make pasta in Italy and breads elsewhere. Durum flour is high in protein, though it is very low in the type of gluten needed to make bread rise – in other words its gluten is inelastic. As a result, when making breads with durum flour, other types of flour can be added to offset this quality. On the other hand, this inelasticity makes it ideal for the making of semolina and premium pasta products. This is why Cyprus Village Flour is used to make the recipes below. What I find most interesting is that you can also use Cyprus Village Flour in some unconventional ways together with All-Purpose-Flour to make some fantastic recipes, e.g. particularly pizza dough and chocolate chip cookies. Village Flour is used to make traditional bread and rusks, Greek bread “koulouri”, All Purpose Flour is a soft, white all purpose flour. It’s used for soft cookies and frying purposes.  Because it is soft and has less protein than Plain Flour (Farina 00) its price is much lower than Plain Flour.  All Purpose Flour also plays a prominent role in Cypriot cooking. It has great gluten strength and I think it is my favourite flour as it is so versatile. In fact, my personal preference (which isn’t really done by a lot of people) is to use all purpose flour when making a lot of traditional Cypriot recipes that actually call for Plain Flour or Village Flour, such as ravioli and flaounes. With flaounes, a traditional flaouna will come out more true to form (i.e. as a traditional flaouna with a harder exterior texture) with Plain Flour and Village Flour, but you will see that my recipe calls for All Purpose Flour. It’s just a preference. Why the preference? I find the result is a much softer texture in the dough which I prefer. It is hard to list specific food items that are made with All Purpose Flour, because essentially the more modern recipes calling for flour, usually incorporate some all purpose flour in the recipe itself. Having said that, my favourite recipes to use all All Purpose Flour instead of a combination of Village Flour and Plain Flour are:

Plain Flour, also known as Farina 00, is a strong, high protein, white all purpose flour used for a wide range of recipes. It’s really suitable for combing with other flours, and a lot of traditional Cypriot recipes will call for Plain Flour to be incorporated in some amount in the recipe. Usually, where I call for All Purpose Flour in combination with Village Flour in my recipes, most people used Plain Flour. You can use Plain Flour to make many Cypriot recipes, such as breads, sweets, cakes, phyllo for baklava, scones, muffins, biscuits, pizza, traditional pies, “Lahmajun” (Armenian pie) and crepes. It is used to make Ravioli and Flaounes as well. Here are some recipes where you can use Plain Flour instead of All Purpose Flour (like I have): Semolina is derived from 100% durum wheat. It is much more granular than regular flour, but can still come in fine or coarse sizes. It is ideal for the production of various confectionery products such as halva, walnut cake, sweet bread soaked in syrup (called “shamali’), a type of Cypriot wedding dessert called “loukoumia”, and Cyprus Christmas honey cookies (“melomakarona”). Here are a couple recipes where I have used Semolina in my cooking: Whole Meal flour is a light brown flour derived from Plain White Flour with added wheat bran. Whole Meal Flour contains more of the wheat kernel than white flour and as a result, it is rich in vitamin B, vitamin E and protein, and contains more trace minerals and dietary fiber than white flour.  It also has a unique odor and taste. The presence of bran also reduce the gluten development which means when you cook with whole wheat flour you might notice that the dish will tend to be heavier and thicker than the same one made from white flour. If substituting white flour with Whole Meal Flour, most of the time you simply just substitute it in equal quantities.  In most recipes, whole wheat flour is mixed in equal quantities with plain white flour, to produce a wide range of crusty breads, bread rolls, pitta breads and many others. Traditionally in Cyprus Whole Meal Flour was combined with Village Flour to make types of sourdough bread and yeast bread. Nowadays though it can be used a substitute in recipes when looking for a healthier recipe. It is used to make crusty breads, a wide variety of rolls, pizza dough, pitta bread, sliced bread, baguette, rusks and wholemeal cookies. Here is a recipe where I used Whole Meal Flour:

Self Raising Flour is Plain Flour to which raising agents have been added. It is generally used in recipes where the mixture needs to expand on cooking to give it a light result, and you are not adding the raising agents yourself. I have not worked much with self raising flour so I am not really sure how to adjust measurements if substituting it with other types of flour, but to do so, you must also adjust the levels of raising agents in a recipe. Once this has been figured out, having everything pre-measured is a useful tool. I know some people use it when making squash pies (“kolokotes”)