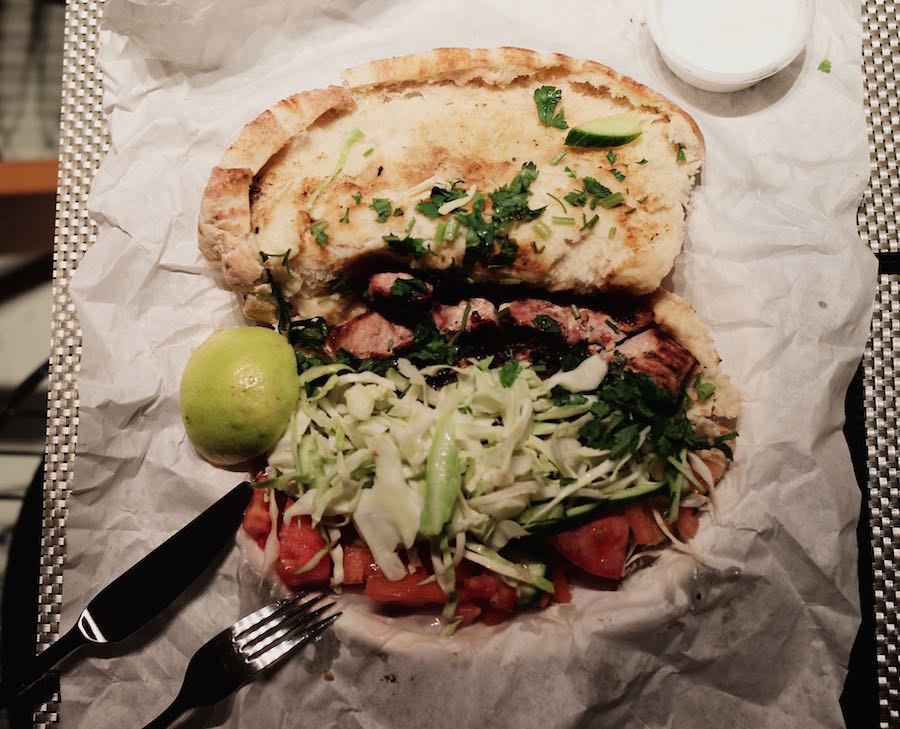 Kritis 35, Kapsalos, 25733090, LEMESOS (LIMASSOL)
Mon-Sat 19:00-23:00
Truth be told, I haven’t tried a lot of “souvlitzidika”, (aka kebab places), in Limassol. It’s not that I didn’t want to, but that I didn’t know where to start. I did try almost everyone in Nicosia, however, where competition is high. So I can’t say I am a “souvlaki” expert, but I have “been around”. This is why I hope you can trust me when I say I found a good one!
We can all agree that what constitutes a good kebab in a pita in Cyprus is something subjective. Everyone has a different opinion on what’s best, and everyone likes something different. I personally like a relatively large pork cube without a lot of fat (although I do like if it’s cooked near fatty pieces). I also like a lot of salad so that the pita bread goes soft in the centre. I definitely dislike small and dry pork kebab cubes, something that a lot of people swear upon.
Souvlaki tis Nikis, (not to be confused with “Souvlaki tis Nikis” in Nicosia), I think is offering something that would satisfy almost everyone. Firstly, the mixed grill (or “pikilia”) that we ordered had a generous amount of meat. It included pork kebab cubes that were tender, juicy and flavourful – relatively average in size (possibly the highlight of our meal). It also included chicken kebab where the chicken pieces were equally tender and beef “gyros” that was surprisingly good being salty and herby. The “sieftalia” were very tasty without being too heavy, something that the owner had mentioned beforehand. Although they did have that strong flavour they usually have there was no after-taste two hours later. The traditional sausage was a proper sized Cypriot sausage with a crispy crust and full flavour, while the pork pancetta was a good addition to the selection. Grilled mushrooms and halloumi cheese completed our meal together with fries and salad. As you can see a full on mixed grill! We also had pork kebab in a pita as we were three people (and the mixed grill was for two). The pita bread was thick and soft, just as I like it and the pork cubes and “sieftalia” were truly tasty, as in the mixed grill. All together, the only thing I didn’t like was the fries as they were of the frozen kind but in reality, no-one orders “souvlakia” for the fries. All of the above was delivered to our house for a total of 20 euros and in all fairness, it was enough for 4 people.

It is worth mentioning that from what I hear at “To souvlaki tis Nikis” they don’t pre-cook anything and they don’t use tenderizers, something that was evident from the flavours. The fact that it is owned by a young and ambitious guy shows that someone wanted to offer something different, of higher quality and better taste to its customers.
This small place offers the basics: kebab in pita, pork chops, mushrooms and halloumi in pita and beef “gyros”. Fortunately for all of us, apart from take-away it also offers delivery!