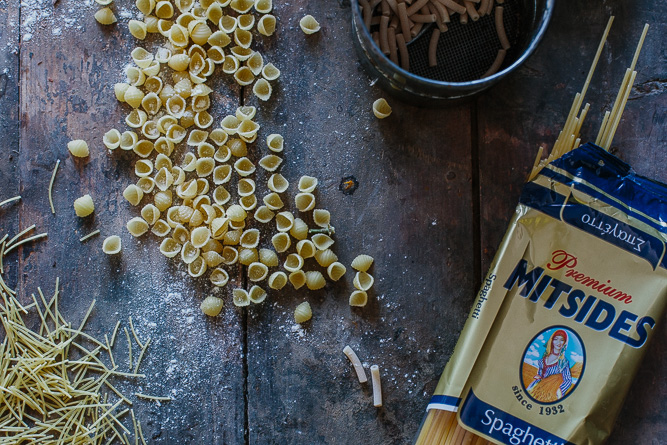 At first glance, you might think that Cyprus wouldn’t traditionally have a connection with pasta. Well, that’s what I thought. But when you think about it, there are actually a lot of Cypriot dishes that involve pasta. Once you start to study Cypriot food, you actually see that there are actually some traditional types of Cypriot pasta, and that pasta is generally used in a variety of dishes. Many people used to make a variety of different types of home made pastas, which I haven’t really gone into detail here. These types of traditional Cypriot pastas include: homemade Cyprus tagliatelle (“tri”), flat pasta squares (“toumacha”), macaroni with bulrush (“makaronia rovanata”) and home made vermicelli (“fides”). Instead a lot of people buy Village Macaroni when craving homemade Cypriot pasta. I haven’t touched on Cypriot ravioli in this article either, which I think probably deserves an article of its own! I have published a recipe for it here, and it is also possible to buy ready made ravioli which is delicious too.  This article is more about what types of pasta are included in modern Cypriot cooking. I have to say there is nothing quite like home made pasta, so this is not to say that I don’t think people should stop making these traditional pastas, if anything, I think more people should start! But, I think it’s a topic for another post and/or recipes. Here is my list of top types of pasta used in modern Cypriot cooking: Traditional Cyprus Macaroni is a type of traditional village pasta which is basically made with village flour, salt, water and – in some cases – a little olive oil. Traditional Cyprus Macaroni is made with hard durum wheat flour. Most other pastas are made with semolina. Nowadays when buying traditional Cyprus macaroni, it will be a pasta which is medium in thickness and cut short into macaroni noodles. It is great on its own with grated anari cheese, but is also a fantastic side dish to “stifados” and Cypriot dishes with heavy sauces. Traditionally it is cooked in chicken broth and served with boiled chicken, grated halloumi and dry mint. I made this just the other week (but I used “anari” instead of halloumi) and it was delicious! Orzo pasta is thin and short cut pasta which have been shaped into small ovals. Again this is a popular pasta which is used together with some traditional Cypriot dishes such as a variety of onion stews (“stifado”) or with meat sauce. Mezzani pasta has a medium thickness is usually cut long. Macaroncelli is very similar, though it is a bit thicker and longer than mezzani. Both types of pasta are used when making the very popular dish called “macaroni tou fournou” otherwise known as “pastitsio” – a type of Cypriot pasta dish with meat sauce and bechamel sauce. Spaghetti pasta is pretty popular in Cyprus. It is often boiled in chicken stock and huge quantities of a type of Cypriot cheese called “anari” cheese grated on top. This is one of my go-to dishes when I am feeling tired and don’t know what to cook. The other great thing about it, is you usually always have the ingredients on hand. Many people also use spaghetti and combine it with a type of meat sauce (“makaronia me kima”). Cut vermicelli is a type of thin pasta and is cut into short pieces. It is used mostly in Cypriot cooking when making types of pilafs, as well as soups, though it is not really considered a traditional Cypriot pasta. It is a popular ingredient used in modern Cyprus cooking. Whenever I have it, it is usually in some sort of comforting soup or side dish. Popular dishes using cut vermicelli include:

plain “pilafi” made with cut vermicelli and rice
“bougouri” made with tomato and bulgur wheat (I definitely need to publish a recipe for this!)
chicken soup I just wanted to mention this pasta as it resembles tiny conch shells and it’s one that my aunts always add to their soups. I am not sure if this is widely done throughout the island, but I love the way it carries bits of the stock inside the conch shell. This is a type of Italian pasta that’s shaped like either like screws or springs. It’s really popular in Cyprus, I think because it has taste in and of itself, and goes great with sauces as well as just plain with grated “anari” on top. Penne is also quite popular with heavy sauces because it provides a mouthful of flavour with each bite.

I love pouring bolognese sauce over top tricolore fusilli, it adds that extra touch of flavour!