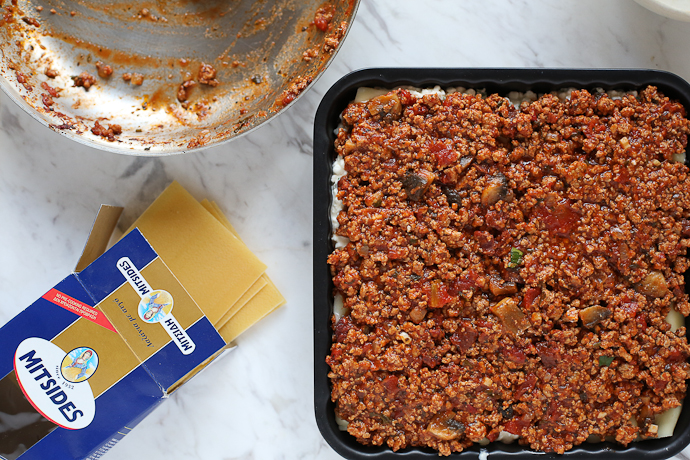 I made lasagna. Which is probably apparent from the picture above. I hope. I followed a recipe by the “Pioneer Woman“. She said that it was the best lasagne ever and that she had made it for dignitaries. I freak out when deciding what to for my fiance who eats absolutely anything, so I figured this recipe has got to be awesome if she chooses it to feed famous people and stuff. So I made it, except I modified it slightly to give it a Cypriot touch. 1. I went mushroom picking the other day and decided to use some of the remaining mushrooms in the recipe; and 2. I wanted something with a spicy kick so I decided to add “pastrouma” – a spicy Cypriot sausage. Plus I couldn’t really find the country sausages that were called for in the recipe. I added onion too because I love onion and some fresh parsley instead of dried and off I went. Hands down, an awesome lasagne recipe. I tried precooking the lasagne this time too as that is what the recipe called for, though I much prefer to not pre cook as I inevitably tangle up my cooked lasagne. In the end, I added some pre-cooked sheets and not pre-cooked sheets and both of them turned out absolutely fine, so I think at the end of the day just follow your preferences. The lasagne is a heavy delicious sort. Classic in every way, save for the spicy “pastourma” which adds a nice bit of heat. OK, that’s about it for today. This lasagna is a keeper. Thanks Pioneer Woman for this fantastic recipe, and Cyprus for the fantastic sausage and Mitsides for the awesome pasta and tomato paste! 5. Either freeze, refrigerate for up to two days, or bake immediately: 175C oven for 20 to 30 minutes, or until top is hot and bubbly. Share:
A Guide to Cypriot Pastas
Top 10 posts for January 2015