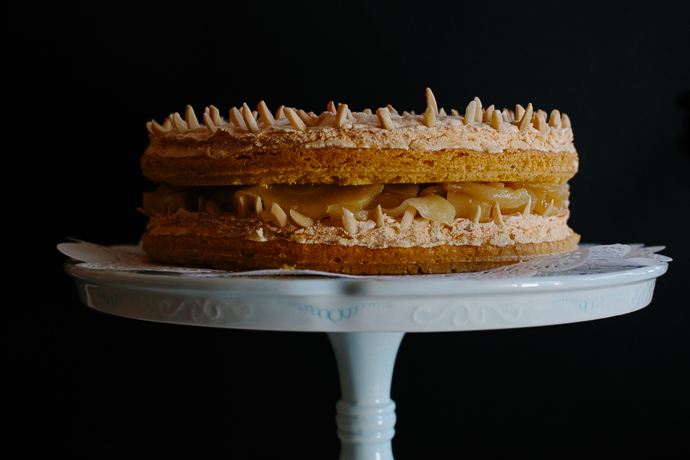 This recipe – believe it or not – actually has roots in Cyprus, though I can’t actually say that it is based on anything traditional. It was given to me by someone close to me, by someone close to them, by someone else close to that person. I have noticed that a lot of recipes in Cyprus tend to be shared this way. Some recipes seem to have existed forever, having been handed down by one person to the next. Not so much the traditional Cypriot recipes, which is why I try to write about them here. But I have noticed that good dessert recipes do seem to continue along. This is one of those cakes that I can imagine being served at parties: baby’s baptisms, someone’s birthday. It is not a difficult cake to make, but it does take time to make each individual layer. Luckily, each layer itself is fairly straightforward to make. Which is why I like this cake. It looks and tastes fancy, but is not too hard to make. It’s sponge cake, with layers of meringue, with a center of buttered apple slices with a slight hint of cinnamon and an almond crunch. Each layer is simple to create and not really anything special on their own, but when they are put together, this cake really shines. It’s extremely light, sweet and the layers balance themselves out perfectly: a touch of butter, almond, apple coupled with the lightness of meringue and a vanilla sponge. I hope you enjoy this recipe. It really is one of my favourite cakes. And I find it’s really wonderful to enjoy it between seasons. Or at baptisms or birthday parties or for no reason at all! It’s not too heavy, nor too light. It’s just in-between-seasons perfect I think. Enjoy. 1. First, make the apple center. Add the apples, sugar, lemon juice and cinnamon stick to a large pot and heat over medium heat until all the water released evaporates. Do not stir too much, otherwise the apples will break and look ugly. Once the water has evaporated, add 1 tsp butter and let the apples cool.

3. Second, make the cake. Beat the butter with sugar. Add the egg yolks one at a time and the vanilla extract. Add the flour and milk until it becomes a soft dough. Butter and flour 2 spring form pans (about 9.5 inches across) and spread the dough evenly in the pans. 4. Third, make the meringues. Beat the egg whites with lemon juice to soft peaks. Then add the sugar very slowly (like a teaspoon or tablespoon at a time) and then slowly add the vanilla extract. Divide the meringue in half and spread each half over top each cake batter. Arrange almonds in a pattern (or not) over top the meringues.

5. Bake the cakes at 175C for 45 minutes – they should be golden brown. Let cool slightly and then remove from pans to further cool. Once cool, add the apples on top of 1 of the cakes and place the other cake on top of the apples and serve.

6. The cake will taste good over the next few days, though it will become softer in the middle as some of the meringue combines with the apples, but this actually tastes really nice so I don’t see it as an issue.