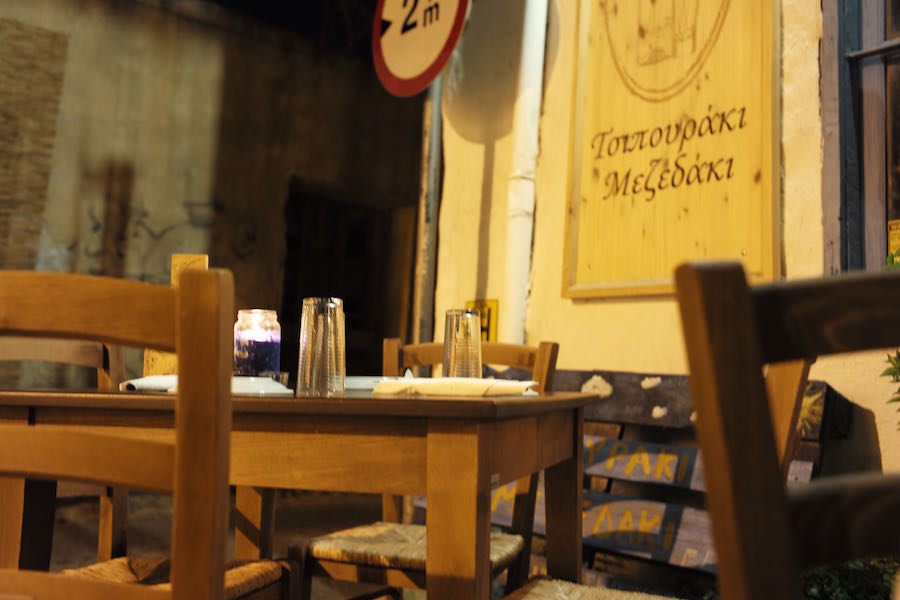 Othellou 1, 99754417, LEFKOSIA (NICOSIA)
Tue-Sun 8:00-2:00
Food: [rating:3.5] 3.5/5
Service: [rating:4] 4/5
Ambiance: [rating:4] 4/5
I don’t want to sound arrogant but when a new restaurant opens and I don’t hear about it for a year I am skeptical about whether or not it’s something good. Two things that came through my mind when I visited Tsipouraki Mezedaki a year and three months after its arrival: 1) How the hell did I miss it? 2) How did everyone know about it before me? Whatever the case, this is so going onto my hidden gem list.
There are some “hidden gems” that don’t look like much but surprise us with the food. Tsipouraki does not belong to this category as upon arrival it looked special. What won me over I think were the small tables on the side walk in front of the restaurant, situated on a picturesque alley at the edge of the old city. I can spend hours describing it but I think its best that you see it for yourself. The inside space of the restaurant was very traditional- it is afterall an old house. The wooden tables, Cypriot ornaments and the generally a very well-decorated space created a warm atmosphere. The fact that it is casual and relaxed made it even better. In an nutshell, the whole concept of the “tsipouradiko” (a place for “tsipouro”-greek alcohol that tastes like zivania, and “meze”) was evident everywhere, on the décor, the easy-going and friendly waiters, the happy and relaxed ambiance and of course, the food. The menu was merely 3 pages of “mezedakia” (small plates), the perfect food for drinking while listening to good music. They were mostly of Greek origin with local touches. Needless to say we had almost everything.
The Greek salad with feta cheese that arrived first was fresh with very good tomatoes, something that it is harder to find as one would think. The smoked pork with cucumber and tomatoes was a great “tsimpima” (nibble) for the “tsipouro” while the Greek “fava” (red lentil dip) and “tirokafteri” (spicy cheese dip), served with Greek pita, were delicious. The “giaourtlou” (pork meatballs with yoghurt sauce) and the “Smyrna” meatballs were full of flavour as the Greek spices gave a very “familiar” and wonderful taste to both of the dishes. I loved the “kolokithokeftedakia” (fried zucchini balls), not because I have never had them before, but because there was something different about them. They were extra crispy on the outside and extra soft in the inside, beautifully presented in a frying pan. The cheese “bouyourdi”, a clay pot with Greek cheeses and tomato is a must-try, especially if you like cheese. I thought we were finished with the meat “tigania”, a dish with mixed meat cooked in balsamic and honey but there was more to come. It might sound overly sweet but it wasn’t, especially for someone like me who is not a fan of sweet-tasting food. What was a bit overly sweet was the mushrooms with coummandaria and the sausage, something that I hear people absolutely love…I guess this is where preference prevails. Finally, despite that we were absolutely full, the two last dishes were worth trying: the fried potatoes were perfectly seasoned and delicious, while the pancetta in carob syrup served on a bed of bulgur wheat salad, a dish that I would never ordered but we were kindly offered it, was so tender that it was probably my favourite meat dish.
The ice cream with carob syrup that came at the end was exactly what we needed, a light dessert with a “traditional” touch to go with our overall meal experience.
The cherry on the cake was definitely the price. A salad for 4€, dips for 1.50€, meatballs for around 2€ (for half portions), and a “tigania” for 4.90€ was ridiculously low, especially for freshly cooked, tasty food. Another thing worth mentioning is that every Friday there is live music (mostly “rembetika”), and more evenings with live music will be added through the year. It’s not a “bouzoukia” place, but a relaxed taverna with good, live music.
While I can keep ranting about how the ambiance was so pretty and the food was cheap, I think what matter the most was that we had a good meal, in a unique setting, with amazingly friendly service and value-for-money food. This is exactly what makes us feel Cypriot and Proud.

Uncategorized
821
0
Halloween is way over but pumpkin season is not! I never used to like pumpkin, mainly because I hated “kolokotes” (Cypriot pumpkin pastries), but then after randomly having pumpkin bread, pumpkin pies, pumpkin ravioli...
Read more

all posts by date  recipes
1183
0
Although I love making new recipes and I am obsessed with cook books, I always find myself often going back to those recipes who are easy to make and delicious like pasta Bolognese, home-made...
Read more

all posts by date  recipes
1498
0
I don’t know about you but for me there are some dishes which are staple meals for my family like Cypriot style fish in the oven, veggie or beef fajitas and of course, spaghetti...
Read more

foodie news & other announcements
1865
0
Probably the best thing I have done this month is have aperitivo by the sea at Ventuno Aperitivo, and I mean a PROPER Italian-style aperitivo: pay for drinks and get a buffet of delicious...
Read more

foodie news & other announcements
1140
0
NOA, the beach front seafood restaurant has hosted a lovely evening of Fish vs Meat tasting menu paired with alcohol (cocktails, beer and wine) which was indeed delicious with dishes from raw tuna carpaccio...
Read more