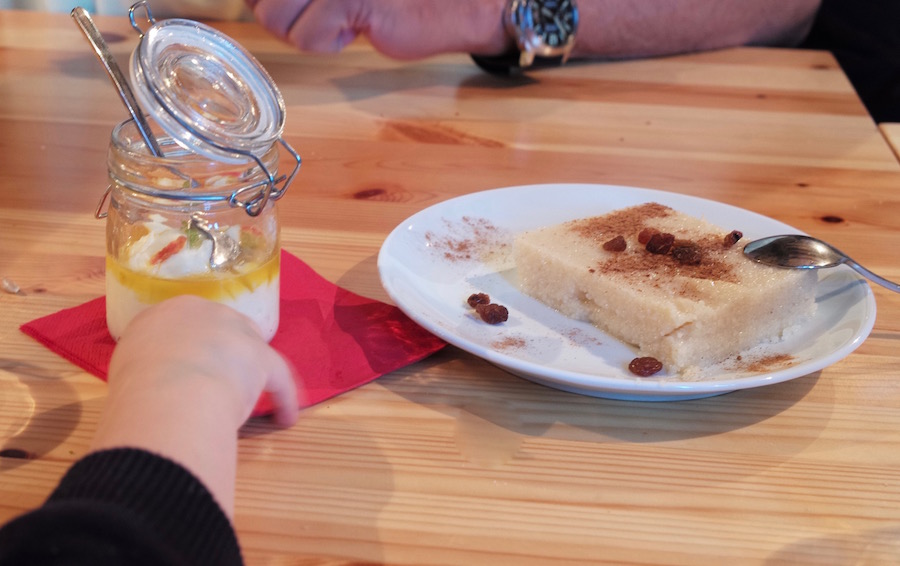 Askas village, 22642641, Nicosia District
Sat-Sun 12:30-15:00
Food: [rating:3.5] 3.5/5
Service: [rating:3.5] 3.5/5
Ambiance: [rating:4] 4/5
I remember being very excited when the proud Cypriot parents said they had discovered a restaurant in Askas village worth visiting, a restaurant that was different to the rest. I had also planned to visit Lyhnos twice last year but both times I had to cancel last minute. One time my dog got sick, the other time my son got sick. It was as if the universe didn’t want me to visit it! Almost a year later I managed to go.
The reviews, which I feel most excited about are for restaurants on the mountains. Maybe it is because I just love taking a day trip somewhere away from the city. Fortunately the drive to Askas is a pleasant one and a short one if you are coming from Nicosia (around 45 minutes). It is situated right in the centre of the small village in an old stone house on the steep side of the mountain. You do not want to see my face when I saw the steep steps I had to walk down to reach the restaurant as my pram weights more than 12 kilos. Fortunately, it was worth it.
It is very small and cosy. The inside space is split into two rooms, something that made it look better since it wasn’t simply a square room with tables. Although the ceiling was low there was enough light not to make it look dark and claustrophobic. I loved the wine cellar that a room in the centre of the restaurant (in which there is an opportunity to dine). I also loved the combination the modern chairs that contradicted the classic wooden décor. I disagreed with the proud Cypriot father who said he would have preferred to see the traditional Cypriot chairs. The veranda with a view of the valley was close to extraordinary, a reason to visit the restaurant. The food was the traditional “meze”. The village, sweet “koulouri” bread that was beautifully presented in a brown bag was served hot, while the lettuce salad was fresh. The “anari” cheese dip that came with the salad was a good touch although quite neutral in flavour. My favourites were: the fried cauliflower that was simply delicious, the halloumi that was fried with tomatoes and onions, and finally, the lamb. It was cooked in paper with carrots and it was super tender and full of flavour. It was so good that the proud Cypriot father was gutted that he was full and could not finish it. The fries were also one of the most memorable dishes since they tasted like hand-cut, freshly fried Cypriot potatoes! The fried zucchini balls and the grilled vegetables were very good, well cooked and served hot. The “pasticcio” (oven macaroni) was tasty but nothing out of the ordinary. Part of the “meze” was also well-seasoned grilled chicken, which was surprisingly flavoursome and a crispy traditional sausage. My least favourite dish was the pork fillets as I generally find them a bit neutral in flavour. Furthermore, I later noticed that the “gemista” never came.
It wasn’t one of those taverns where they offer a massive selection of Cypriot dishes and half of the food remains untouched. The quantity was appropriate as we finished everything.
Fortunately Lyhnos offered desserts as well. The traditional “halva” with almonds and cinnamon is a great dessert after such a meal since it’s light yet satisfies the sweet tooth. The vanilla cream with fruit which was beautifully presented in a small jar was the highlight. It tasted like custard cream with a stronger vanilla flavour.
It is worth mentioning that the wine list consists of the best of the best Cypriot wine and that the “meze” is 18eur per person.
I have included Lyhnos in one of the restaurants that I would visit again because firstly the ambiance is great, modern and cosy with friendly service. Secondly, although the food is not extraordinarily different or extremely fantastic, it is very good, well-presented and fresh. The bill of 71€ for 3 adults and a 2-year-old seemed a lot but we had 3 glasses of red Vlassides wine and a quarter of a litre of Zivania. The “meze” costs 18€ each.

all posts by date  recipes
967
0
Although I love making new recipes and I am obsessed with cook books, I always find myself often going back to those recipes who are easy to make and delicious like pasta Bolognese, home-made...
Read more

all posts by date  recipes
1090
0
I don’t know about you but for me there are some dishes which are staple meals for my family like Cypriot style fish in the oven, veggie or beef fajitas and of course, spaghetti...
Read more