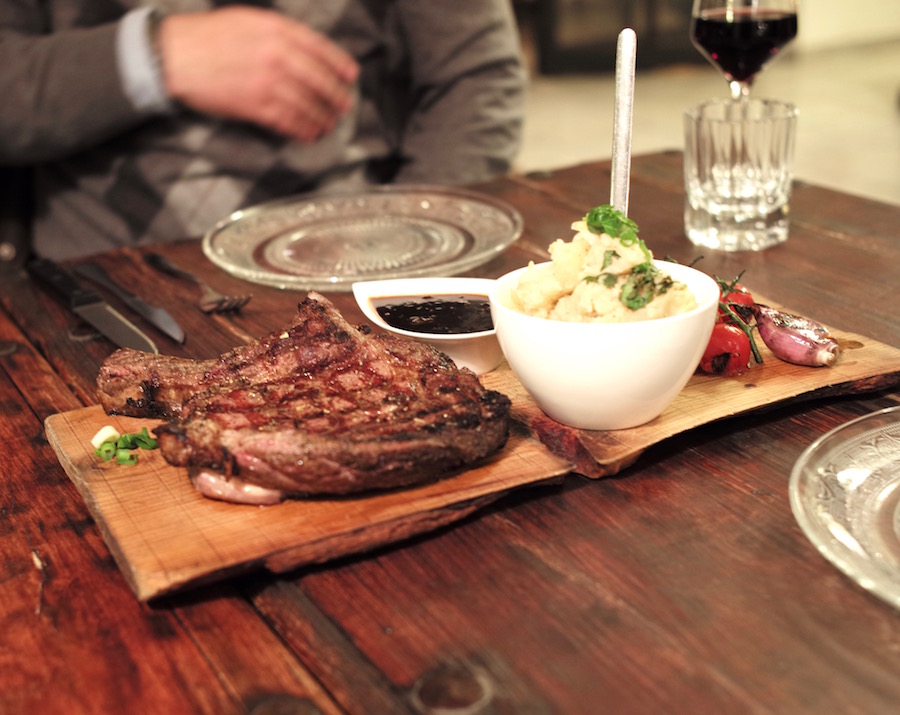 Poseidonos 52, 96677288, PAPHOS
Mon-Thu 18:00-23:00, Fri-Sun 12:00-23:00
Food: [rating:4] 4/5
Service: [rating:4] 4/5
Ambiance: [rating:3.5] 3.5/5
I don’t visit  Paphos as often but when I do go I make sure it’s worth it. The fact that The Lodge is a steak house alone was enough for us to drive 35 minutes from Limassol to Paphos to have dinner. It ended up being a great steak house and thus for you it should be a no-brainer. On top of this, I thought that it was actually a fantastic South African restaurant which is what will make us go back again and again.
Although it has been open for a year I only found out about it recently. Its location right at the entrance of Kato Paphos is good because it makes it easily accessible, and despite being on a busy road, the restaurant is facing its backyard, which means it’s more quiet and private than expected. The restaurant has two rooms: one has dimmer lighting and large wooden dining tables which would probably work better for larger groups. The other room and the main area of the restaurant is more casual looking with smaller tables and a window to the outside yard. The African origin of the restaurant is obvious as the dark wood prevails. A few South African ornaments here and there add to its South-African identity. The overall ambiance is elegant but casual. It’s a place to which you can go for a dinner with friends, a romantic dinner or even a last minute casual dinner (assuming you call and reserve your table beforehand!). My favourite part though was most definitely the food. Not only in terms of flavour but also the type of cuisine and variety on the menu. Let me just say that when I want to order the whole menu it is always a good sign. Yes, steak is the main thing but not the only dish worth ordering at The Lodge. South African cuisine is actually a mix of different cuisines from all over the world and reflects every nation and ethnicity which has been to and left their mark on the country: Portuguese, Dutch, English and of course, African to name a few. We tried a bit of everything.
The Peri Peri prawns that we ordered as a starter (also recommended by our friendly waiter), were delicious, mildly spicy and well seasoned. Although I preferred the Peri Peri sauce as it is more spicy, the Braai sauce (similar to barbecue sauce), that we tried with the chicken wings was worth it to get a taste of South Africa. We also tried the home-made sausage (a dish you have to have if you are a sausage fan) which, was tasty and in fact had a very similar in flavour to the Cypriot sausage. For mains we had the burger with cheese and bacon, in a home-made brioche bun which was more than delicious (it tasted as good as it looked). The ribeye steak that we ordered medium cooked was fantastic and a must-try. It was thick, tender and extremely juicy (I understand that this is a consequence of the marbling of the ribeye which is the reason I prefer it to the fillet). The ageing is done at the premises of the restaurant which I thought showed the level of attention paid by the Lodge to getting things right. We thought about having a rib eye and a fillet but we really wanted to try a traditional South African main dish. The lamb that was slowly cooked in a clay pot (“potjie”), was a dish very similar to our “kleftiko”. The flavour of the lamb was similar but it was cooked with more vegetables so it had a less meaty and more “diversified” flavour. Needless to say the lamb was melting at a every bite. Finally the side dishes that we couldn’t finish were of similar quality as everything else. The large cut tripe-fried fries were super crunchy and salty- the ultimate burger side while the warm cabbage salad (a South African traditional side dish called “morogo”) that was a stir fry of red and white cabbage was a more neutral in flavour and a healthy side dish that balanced the flavour of the main courses. Saved for next time are the combo dishes that included steak and prawns and other delicious combinations. Finally the starters were around 10euros and the steaks around 20euros each, prices that were reasonable given the quality of the meat and the raw ingredients.
We also had a glass of red South African wine each, which was much better than expected in terms of what we have been used to regarding wine offered by the glass at restaurants in Cyprus.