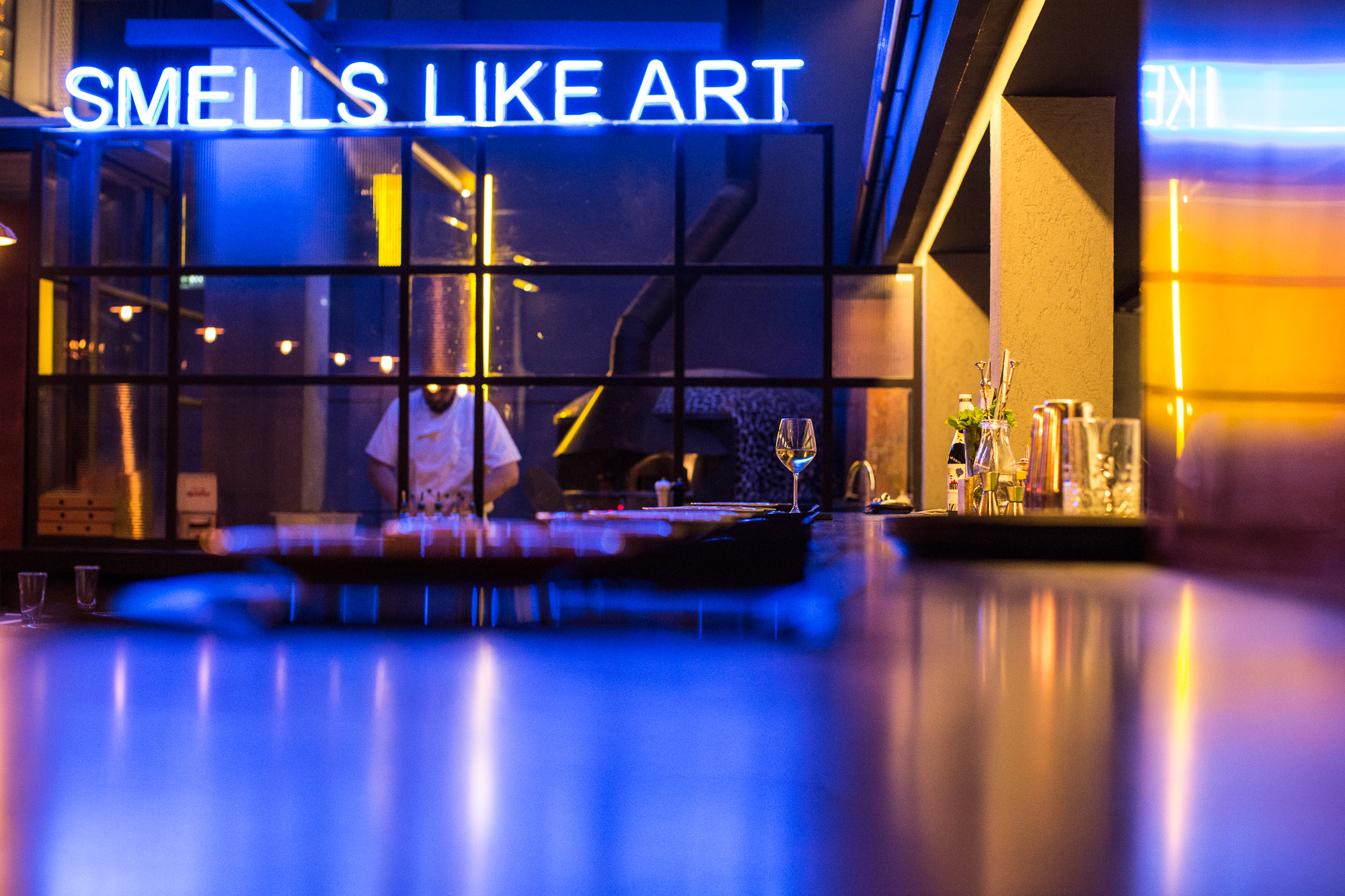 Christodoulou Sozou 21, 22254525, LEFKOSIA (NICOSIA)
Mon-Sat dinner, Sat lunch
Food: [rating:3.5] 3.5/5
Service: [rating:3.5] 3.5/5
Ambiance: [rating:4] 4/5
When Rokoko opened a few months ago (around 10 to be exact), I wasn’t sure if it would be a success. Thinking back, the odds were in their favour since the location is quite popular with Silver Star, Gouni and Kantina around the corner, the food is very easy-going and the place is trendy and casual. This seems to be the recipe for all-year round success on our little island!
Rokoko has a character and an identity of its own. The best part about it in my opinion is the buzzing atmosphere and the cheap and tasty pizzas. The long and rectangular inside space has been taken advantage appropriately with a long central table (that is, or looks like a table tennis table!). It is a communal table divided by columns, which is surrounded by a few smaller tables. There is also a bar on which one can dine that I thought was cool. The neon lights are kind of overused lately but are definitely adding to the whole buzzing and “New York style” vibe. Finally I appreciated the fact that the outside space was enclosed by a nice, black metal structure rather than the standard (and horrific) plastic tent (aka “moushammas”). The food was nothing less than what one would expect from such a place: easy and tasty. The menu was not too long and included 4-5 salads, pasta and 4 main courses as well as a longer list of pizzas. Fortunately we were five proud Cypriot girls so it was a good opportunity to try more dishes. From the starters we agreed that the highlight was the spinach roll and goat’s cheese in a filo pastry with a very mild honey sauce. The crust was crispy and the filling was tasty without being too heavy. Everything about the “orzo like risotto” (besides the name that sounds a bit weird) was good. It was cooked al dente with a thick sauce that wasn’t too rich. It was in fact much better than 10 months ago. There wasn’t too much lobster but we didn’t mind and mild savoury tomato flavour was well balanced. The crispy aubergine fritters, our last starter that were kindly offered on the house I thought were a nice change to the standard zucchini fritters, while the proud Cypriot friends said they were cirpsy and tasty but a bit heavy. What I liked about the pizzas was that they were extra thin with a good amount of cheese and toppings. They were also well priced at 9 and 9.50€. I can recommend both, the Margarita and the Diavola (with pepperoni and chilli) that we devoured in no time.
Finally the home-made ravioli with parmesan flakes, four cheeses and tomato was delicious. The ravioli was not overcooked and the sauce was rich so it was a good dish to share. The only dish we didn’t really like was the rigatoni salmon that was good in texture but way too salty. After all of the above and two bottles of wine we had to have dessert. The calzone with nutella was one of those desserts to share where you indulge like there is no tomorrow. It was every nutella fan’s paradise. The proud Cypriot friends loved it. I thought it was a simplistic dessert and given the good dinner that we had I would have expected something more creative. The tiramisu, which was not really a tiramisu but a layered jelly-like chocolate cake was not at the same standards as the food. I also think they should mention that the calzone was to-share and about 5 times the size of the tiramisu.
Although they could have done better in the desserts we had a very good meal with well-priced and tasty food in a trendy, pleasant and happy place. I don’t know if it was the wine, the good company or the overall buzz but we had a great time. I would happily go back anytime.