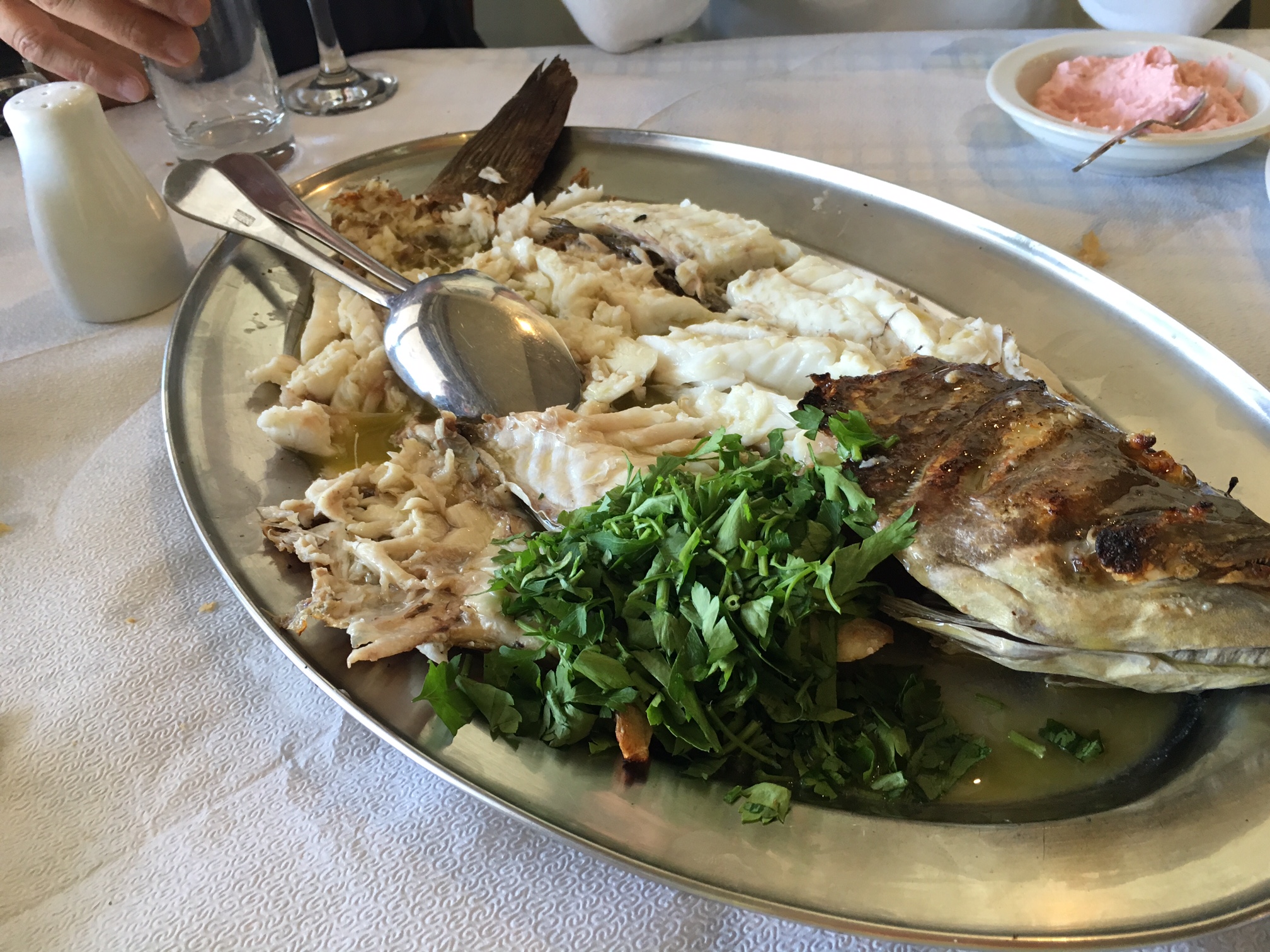 Serifou 44, Zakaki, 25390372, LEMESOS (LIMASSOL)
Mon-Sun 12:00-23:00
Food: [rating:4] 4/5
Service: [rating:3.5] 3.5/5
Ambiance: [rating:3] 3/5
Why it took me 4 years to go to Kavourotrypa I don’t know. I heard it was good a bit after I came back to Cyprus around 2012…I ignored it. I also heard it was good about a year later…I ignored it. Mr Proud Cypriot came to me 2 weeks ago saying he heard it offers some of the best value-for-money seafood…well I didn’t ignore it but I forgot about it. This past Sunday when we were deciding where to have lunch, I of course, forgot about it….until Mr Proud Cypriot took initiative and arranged for us to go there (and that’s a first!).
When I hear “Zakaki” it sounds far away but I was shocked to see that it was a few minutes, if not seconds away from The Mall of Limassol. With the super-convenient-and-fast Limassol highway it is very easily accessible. At first glance it looks like a tidy and well-kept fish tavern, nothing more, nothing less. It has a few tables outside on the sidewalk of a quiet street and more tables inside. Furthermore I liked how it was not the oversized, noisy tavern I expected. The Maitre’d (or head waiter), welcomed us very warmly and let us sit wherever we wanted given that we were 4 adults with two pushchairs. The second thing I liked apart from the friendly welcoming was that we were immediately called to choose our fish- no menus- just the way I like it. Mr Proud Cypriot and the proud Cypriot father chose what we were going to have that was nothing but the usual dips and salads and a selection of fresh fish fried or on the grill. The tahini dip was good (although it doesn’t say much), while the taramosalata was not home-made but that’s no biggie. The salad was fresh, perfectly lemony and delicious. I started feeling it would be special when they brought cold, white fish fillet casually cropped and dipped in olive oil as a mini meze-starter, as well as hot octopus served in olive oil and ink (again as a tiny meze starter)- both yummy and different. The fried calamari served whole was what followed and it was tender and full of flavour with a crispy fried crust. I thought the fact that it was fried whole was a great differentiation to the standard calamari. I am not saying it’s the most difficult thing to cook but you will be surprised how many times we get hard and chewey calamari that tastes like nothing. The large-cut fries were amazingly crispy and salty, much larger than the standard and fried in the same oil as the fish- something that I absolutely love as it reminds me of my childhood. The grilled octopus was also tender and soft, served with olive oil and parsley. The grilled calamari was equally good (although I don’t know why the proud Cypriot men ordered both, a grilled and a fried one). I would have preferred cuttlefish but perhaps it wasn’t fresh. The dish before the last was fried red mullet. They were quite large in size, and although freshly fried and quite good I have had better. I prefer when the fried crust is more flaky. Finally the white grouper, an oily fish that is a great option for something more flavourful, was truly delicious. It was grilled the right amount of time an served with a lot of olive oil and parsley-highly recommend it! We didn’t have dessert and didn’t even ask if they had any because with 2 crying kids, unfortunately one has to make sacrifices. With a bottle of white Gerovasiliou wine, a bottle of water and no dessert it came to be 169€ for four people. That’s around 42€ per person, a lot less than the 60-70€ we pay at The Old Neighborhood. I love Mr Nikos (of The Old Neighborhood) and I think it’s probably the best seafood tavern with the highest consistency with fresh and fantastically cooked fish, but it’s overpriced.
When people ask me now where to go for Sunday lunch for fish, I am no longer recommending Fat Fish and Puesta. Kavourotrypa might not be by the beach but it is probably the best option for fresh seafood in Limassol.