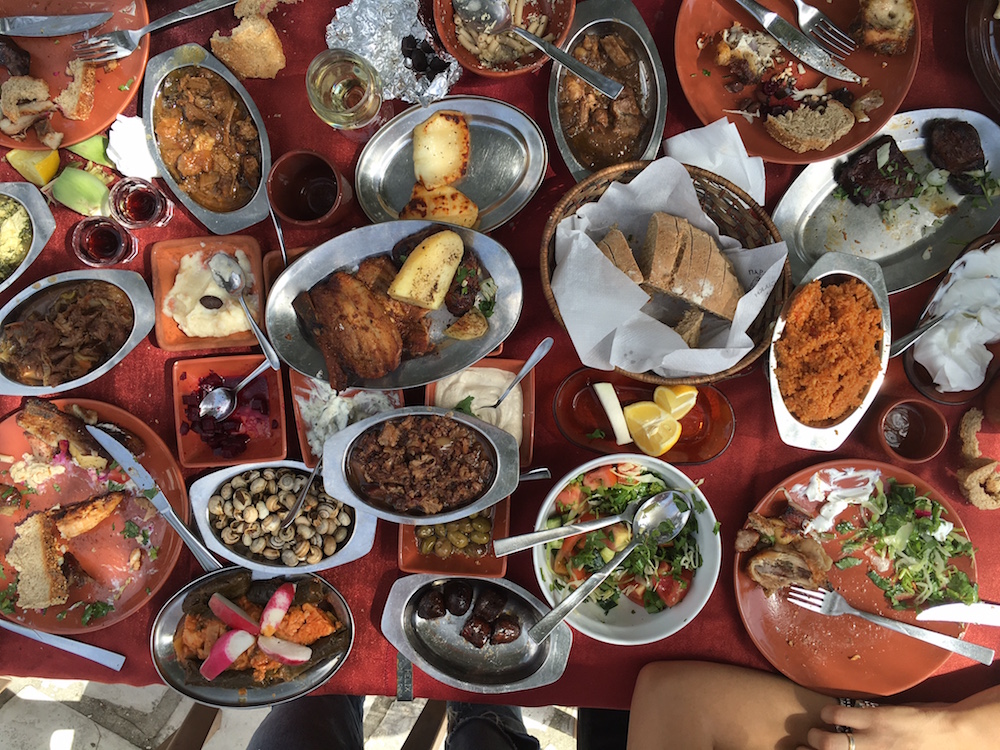 Agia Anna village, 22532500, NICOSIA DISTRICT
Food: [rating:3.5] 3.5/5
Service: [rating:2.5] 2.5/5
Ambiance: [rating:3.5] 3.5/5
Last minute calls are the best ones… no anticipation, no expectations. That’s exactly what our lunch at Agia Anna was. Right when we were going to skip lunch as we had to leave Nicosia to be in Limassol by 3pm we thought we could make some time and go somewhere in between Nicosia and Limassol. And that was when Mr Proud Cypriot had the idea of Agia Anna, a very well-known-but-kind-of-forgotten tavern (I thought).
Right after Mosfiloti village near Psevdas, we found Agia Anna tavern. It’s quite picturesque, situated in an old house, built in stone. The overall ambiance is traditional and cosy, while the owner is dressed up as a “vrakas” (Cypriot traditional uniform), with a moustache longer than my hair. We sat outside in the large yard right as it was a beautiful day.
The Cypriot-classic, clay plates and bowls that were on the tables was a good representation of what was to come (and so was the slow service but I won’t focus on that for now). First came the “avgolemono” (egg and lemon) soup that was delicious. The weather wasn’t very appropriate for soup but it was worth it. Even my 2 year old son (yes, he is 2 already) had two bowls of it. What followed was a selection of around 15 small dishes, probably the biggest “meze” selection I ever had in a traditional taverna (not exaggerating!). I am trying to remember all of them, but I am definitely not forgetting: the amazing “kolokasi” with extremely tender pork, the fresh “halloumi” served hot that was truly delicious (we hardly ever get it and that alone is a reason to return). We had 3 dishes that looked and tasted like “afelia” (pork cooked in wine), but apparently they were different. All three were dipped in tons of oil but were delicious. The chicken “souvla” was also crispy and full of flavour and so was the Cypriot sausage. The rest of the selection included chicken tandoori fillets (a bit random but tasty), small snails that are a delicacy but I am not a fan, pork kebab and the traditional “sieftalies” that were quite good, seasonal vegetables with eggs, “koupepia” and village macaroni with “halloumi” cheese. I wasn’t impressed with the bacon that was a bit hard, the village “halloumi” (-a bit unnecesssary since we also had the hot, fresh “halloumi”), that came cold and the desserts. Instead of having a buffet of literally all the traditional desserts (rice pudding, “galaktoboureko”, “anarokrema”, “siamali” and jelly with cream) I would have preferred to get one served to our table. type of cake on our table. Apart from the hot, fresh halloumi and the “avgolemono” soup another thing that made the difference was that you could make your own Cypriot coffee on a traditional, hot sand box. That was the second time Mr Proud Cypriot said he will include Agia Anna in his “regulars”. The first was when they brought cold glasses, directly from the freezer for his beer! In a nutshell, there is A LOT of food (a bit too much in fact), not all of it is special, but there are a handful of things that made a big difference. I would definitely recommend the cosy inside space for a cold, winter day and the outside yard for a warm spring lunch!
We paid 22euros each for all of the above, a bottle of Cypriot wine and two beers…not too shabby!

foodie news & other announcements
1004
0
NOA, the beach front seafood restaurant has hosted a lovely evening of Fish vs Meat tasting menu paired with alcohol (cocktails, beer and wine) which was indeed delicious with dishes from raw tuna carpaccio...
Read more