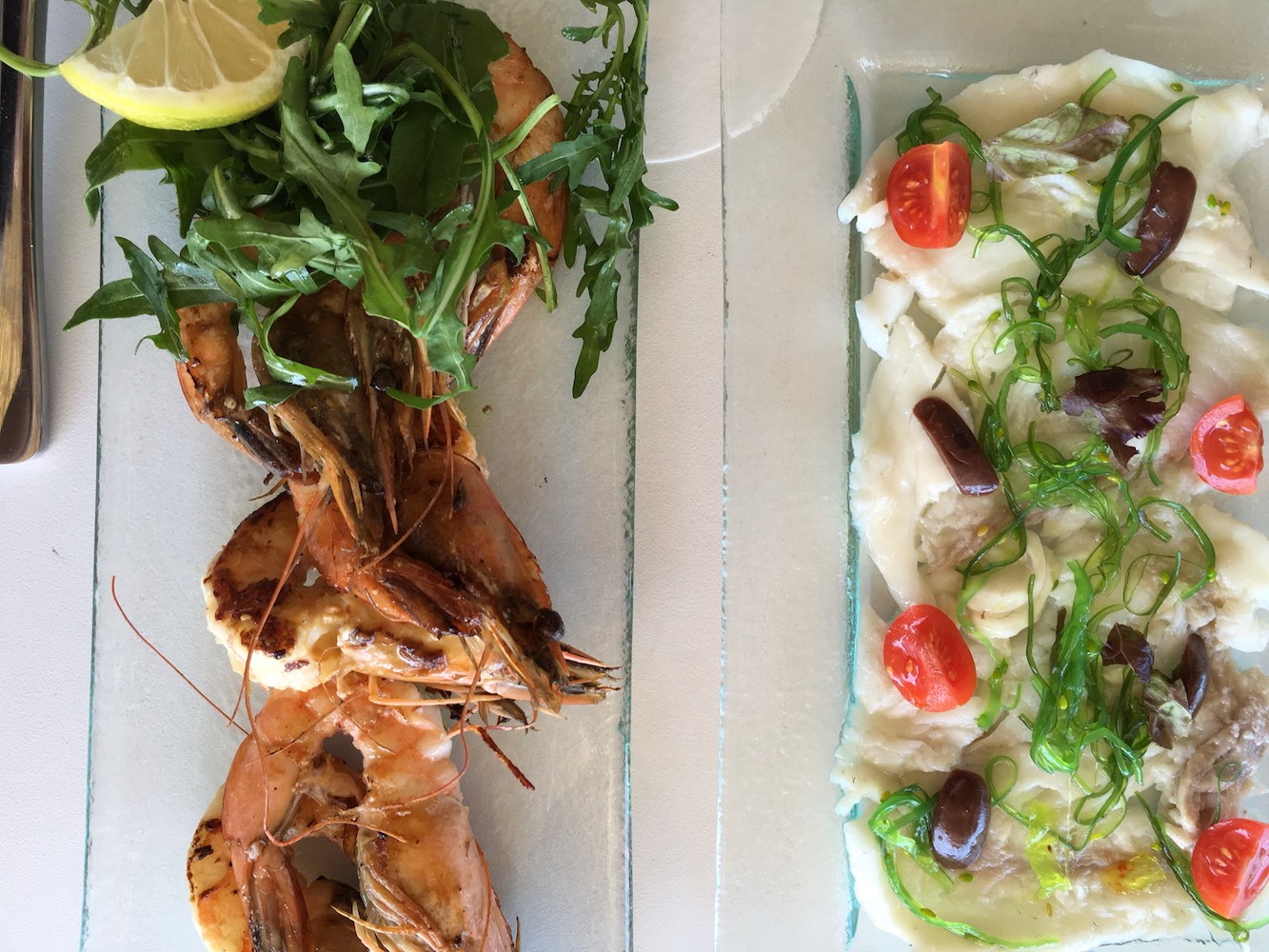 Limassol Old Port, 25022377, LEMESOS (LIMASSOL)
Mon-Sun 12:00-23:00
Food: [rating:3] 3/5
Service: [rating:3] 3/5
Ambiance: [rating:4] 4/5
What do you do when you hear that THE Lazarou is involved in a new seafood restaurant in Limassol? You go there! An equally good incentive besides the big name behind it is its location. The small and cool space right by the old-but-renovated Limassol port couldn’t be better for a modern, seafood tavern. And finally, the beautiful decoration that perfectly fits the island lifestyle is more than appropriate.
A modern seafood tavern is not something “new” in Limassol since we have Fat Fish and Pyxida, both modern-with-traditional-touches seafood restaurants by the sea. The truth is, however, that we still have room for more, however as this is what we need in this city. Starting with the décor, I thought it was probably the highlight. I loved how it had traditional elements but it was modern and fresh. It’s casual but enough to be able to go for a nice dinner, or an easy lunch with friends. I also liked the relatively small size of it, as it makes it less mass-production.
The menu was not too long, something that was generally a good thing. However, I found that a lot of the starters and main dishes were the same. We weren’t in the mood for fried food or big fish, so I found it a hard to choose enough dishes for 3 people. The Greek salad, the “tahini” and the bread with olive oil that came first were a very promising start to our meal, both in terms of aesthetics and taste. The seabream carpaccio with lemon was quite tasty, and a good  nibble to start with, while the grilled prawns were tasty and simple. Don’t get me wrong, they were fresh but again, just a nibble. The prawn “kritharoto” (orzo), that came in a bowl wasn’t bad and neither was the “fava” (red lentils) with octopus. Since we were still hungry we also had the mussels in white wine sauce that were rather bad, dry and tasteless. In all fairness, it was not the level of flavour that one would expect by Lefteris Lazarou. We have been to Varoulko Seaside and saying that it blew our minds away would be an understatement. So we know what he is capable of.
Surely there were a few dishes we would like to try like the pawns in beer with honey mayo, and the octopus balls with honey pepper and we will since I personally am willing to give it a second chance as I need another good seafood place in Limassol (not what I can say about Mr Proud Cypriot!).
I would say go for the amazing location and pretty décor, for the good wine and the nice vibe. Go with low food expectations and you will not be disappointed. We paid 80euros for 3 people with a bottle of Greek wine, a relatively good price I would say.