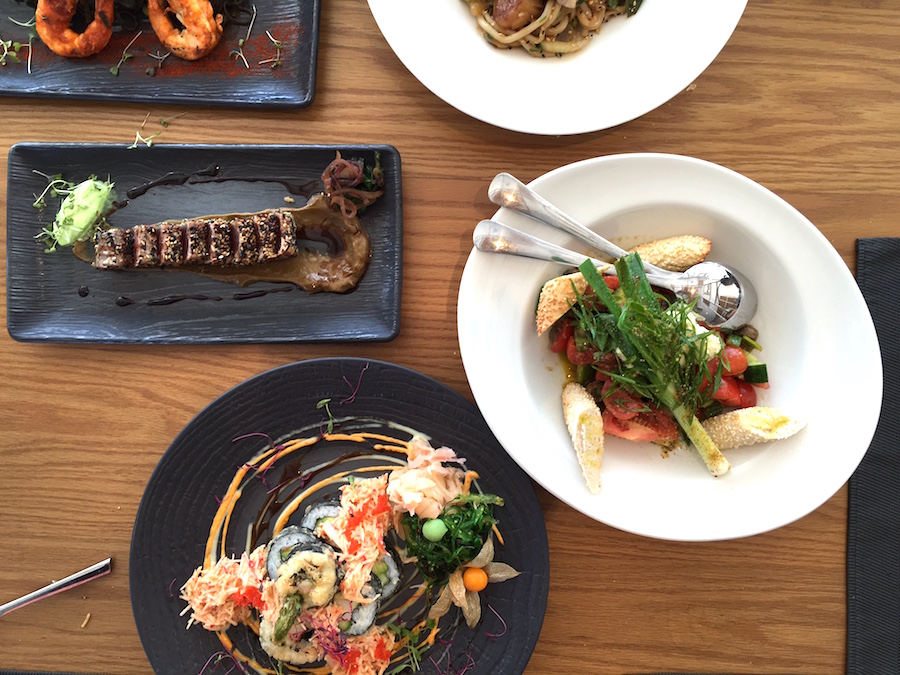 Limassol Old Port, 25022375, LEMESOS (LIMASSOL)
Mon-Sun 12:00-23:00
Food: [rating:3] 3/5
Service: [rating:3.5] 3.5/5
Ambiance: [rating:4] 4/5
Move away Limassol Marina, step in Old Port! This is apparently the current sentiment in Limassol with the Old Port taking over the high end restaurant scene. No, no, this is not the review of Gin Fish (although that’s coming soon), but of Pier One, another talked about opening. Modern, fresh and ambitious is the best way to describe it.
It is the first from the left, out of the prime-location spots that are literally, above the sea. The beautiful and modern structure of the building is something more prettier and more appropriate than that of the Marina which I can’t get over. The restaurant is higher than sea level with a panoramic view of the deep blue sea. I liked how there was an inside space with low tables, mostly for dining, and a larger space outside. Needless to say the whole places is surrounded by windows. The bar is long and beautiful, a place where I see myself having a drink soon. The menu is international with an inclination towards Japanese cuisine. Apart from sushi, sashimi and some raw fish starters there is a selection of salads including a Greek salad and a Deconstructed Caesar salad with a poached egg  looked attractive. We went for a selection in the middle as always.
The Reinvented Greek salad with colourful tomatoes and a fetta mousse was very tasty and probably the best dish we had in terms of flavour. All the ingredients were noteably fresh. The Tuna Tataki with aubergine puree was served a bit warm which I found strange. It was good in flavour but a bit rich. The Tempura Crab Volcano was very impressive in terms of looks, a true volcano. The maki itself was quite good but I also thought its garnish was a bit too much. The trend continued with food made of high quality and fresh ingredients but a bit over-garnished both in looks and flavour. The Prawn Linguini were not bad, made al dente and tasty while the Grilled Pork Chop Fillet served with udon noodles was a good choice for something different. It is obvious that effort and attention to quality was put into every dish, so I would definitely give it another chance for the simpler dishes like the burgers, sandwiches and breakfast.
It is also worth mentioning that service was friendly and attentive. We paid 91eur for 4 people and a child with 4 glasses of beer.

all posts by date  recipes
1089
0
I don’t know about you but for me there are some dishes which are staple meals for my family like Cypriot style fish in the oven, veggie or beef fajitas and of course, spaghetti...
Read more

foodie news & other announcements
1451
0
Probably the best thing I have done this month is have aperitivo by the sea at Ventuno Aperitivo, and I mean a PROPER Italian-style aperitivo: pay for drinks and get a buffet of delicious...
Read more