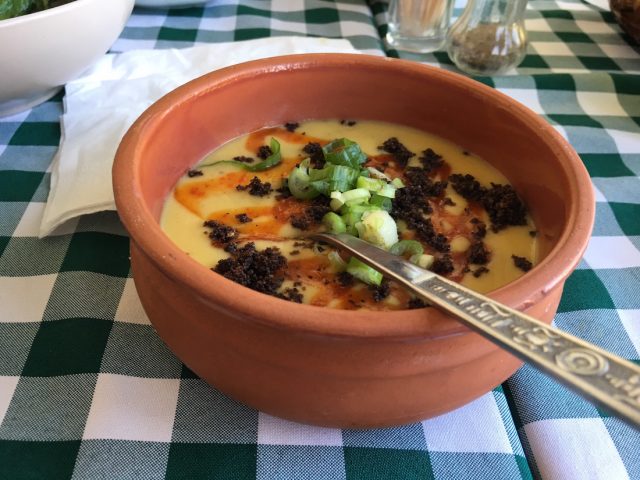 by The Proud Cypriot
Tersefanou Village, 24424831, LARNACA
Fri-Sat dinner, Sun lunch
Food: [rating:4] 4/5
Service: [rating:4] 4/5
Ambiance: [rating:3] 3/5
When I was told it’s Cypriot creative cuisine I wasn’t very excited as that usually means failed attempts to twist something authentic. Most of the times everything turns out too sweet, full of dried fruit and commandaria. The truth is there was some commandaria and occasional sweetness but I can comfortably say this was the most successful attempt I have ever seen to make Cypriot food differently.
Did you ever wonder what’s next to those massive windmills close to Larnaca airport? Well, it’s Tersefanou village. Admittedly I can’t see any other reason for someone to visit it besides to eat at “To Patrikon”. The restaurant is on the “main’ street of the village in a tiny, old school house. I particularly appreciated how they took a space of nothing and made it into this cute, friendly and hospitable restaurant. Although the decor is simple, there is a special happy vibe in the whole place.
When they said it’s a “17 dish meze” that changes often and that we didn’t have to choose anything out of a menu I was almost ecstatic. First came the bread, and what a bread that was. Warm, full of local herbs and truly special. I felt we could literally have a whole meal just of that bread and the dips that followed. In fact, a couple of my proud Cypriot friends did! The yogurt dip and the tahini with carob honey were both delicious. The Greek salad and the broad bean (“koukia”) salad served with the seasonal “louvana” and lots of olive oil was the epitome of authentic Cypriot freshness. The lentil soup, slightly salty was quite good although I was the only one who appreciated it. My favourite dish besides the broad bean salad was definitely the zucchini with eggs (but not as you know them). The lightly seasoned zucchini with poached eggs on top was something beyond delicious for any egg fan. Mixing the yolk with the fresh vegetables was a new “kolokouthkia me ta avga” experience. The homemade halloumi served hot said a lot about the attention that was paid on each and every dish while the “pastourma” (spicy sausage), was a good one to have among the more creative ones. From the meat I was surprised to see everything was special in its own way (and none had fruit or honey)! My favourite were the spare ribs in commandaria as they were super tender and full of flavour, lightly sweet (but not too much). The marinated chicken “souvla” and the pork fillets were not far behind. The fried “trahana” balls were not my favourite in terms of flavour but they were well prepared. The only thing I wasn’t impressed with although I appreciated the effort to make something alternative was the Cypriot pumpkin (kolokoti) dessert. It was a bit too sweet and overly cinnamony for me (and I love cinnamon).
I was very pleased and most of all, Cypriot and Proud to hear that the owners and creators were two young brothers, educated in the culinary space, humble people who started slowly and quietly, yet managed to make some of the best dishes I have tried in a long time.
25eur per person for all of the above, wine and beer was really value for money.

all posts by date  recipes
1089
0
I don’t know about you but for me there are some dishes which are staple meals for my family like Cypriot style fish in the oven, veggie or beef fajitas and of course, spaghetti...
Read more